The Reign of Edward IV 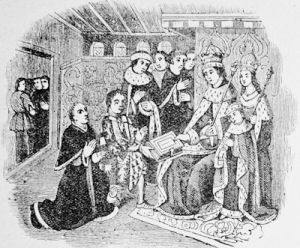 Edward IV, his son, Edward V, and the court

Edward IV's character
After the victory of Tewkesbury, Edward reigned unchallenged for some twelve years. In the hour of his triumph he was only in his thirtieth year. He had proved that when he chose to exert himself he was not only a first-rate fighting man, but a consummate general, and — always with the same proviso — a master of diplomatic craft and persuasiveness. Incidentally also, he was completely and perfectly unscrupulous.

Nevertheless he was fundamentally indolent, a lover of pleasure, unambitious. Since he had chosen to play for a crown, he made a point of winning it; having won it, he intended only to enjoy it at his ease. He did not play the tyrant in general, because doing so would not have conduced to his comfort; but if his comfort demanded an act of tyranny, however monstrous, he committed it without a qualm.

He reigned as an absolute monarch without protest on the part of people or barons; because he did not attempt to tax the people, while only a remnant of the old baronage existed, and the new men were his own creatures.

Money
Edward's demands for money were so rare that we are at first inclined to wonder how it was that he alone managed to do what the grumblers always declared the king ought to do, and " live of his own." But in the first place his treasury was conveniently filled by the enormous confiscations, the spoils of the final victory over the Lancastrians, and in the second place he made up for any casual deficiencies by the ingenious device of Benevolences.

That is, he asked not for loans, but for presents; and the individual who refused his request learnt that if his good­will to the king was so small his loyalty to the throne fell under suspicion. It was cheaper to pay with a good grace than to resist; and at the same time it was not easy to build up a constitutional opposition on the basis of Benevolences, since technically no compulsion was brought to bear.

From these sources then Edward obtained sufficient supplies for a personal expenditure which was lavish but not particularly extravagant — he had the business instinct — while his public expenditure was even parsimonious. Moreover he was released from the eternal drain of the French wars as well as from the spasmodic expenditure on the defence of his throne against a rival dynasty.

Administration
Thus it was but rarely that Edward found it necessary to summon a parliament; and parliaments, when he did summon them, were degenerate. In the chaos of recent years free elections had dropped out of fashion.

Borough elections had fallen into the hands of the corporations, and the corporations themselves tended to become close bodies. The franchise of the shire courts, which elected the knights of the shire, had become restricted practically to free­holders; and in point of fact election was frequently superseded by the mere nomination of the sheriffs, else was effectively controlled by local magnates, so that the House of Commons was now very largely a packed assembly. On the other hand, of the old baronial families, the alternate victories of Lancaster and York had left few surviving members in either faction, and their places were to a great extent taken by a mushroom peerage of Edward's own creation.

If Edward had chosen to emphasise his position as an absolute monarch, it is likely enough that he would have been able to convert the English monarchy into an almost unqualified despotism. He did not do so, because he had no ambitions which made it worth while to risk trying to do so. The twelve years of Edward IV.'s reign as an absolute monarch are distinguished chiefly by an event which was not political at all, the setting up of Caxton's printing press under the royal patronage. For Edward was a patron of art and literature; intellectually the most cultured monarch who had occupied the English throne, at least for many centuries.

Death of Clarence
Two other events, however, have to be recorded. The ambitions and the arrogance of George, Duke of Clarence, excited Edward's wrath. The duke was arraigned before parliament by the king in person, was condemned, and died in prison when his execution was imminent. There was no adequate reason for murdering him in the circumstances, and the later tradition that he was drowned in a butt of Malmsey wine was probably a pure fiction.

Premature deaths were always attributed to violence. Clarence left a son and daughter, Edward, Earl of Warwick, and Margaret, Countess of Salisbury—they were the grandchildren of Warwick the kingmaker — both of whom ultimately perished by the axe of the executioner.

The other event was Edward's French expedition of 1475. Edward proposed to make war upon Louis in conjunction with Charles of Burgundy, a prince as erratic as he was ambitious. It was a long time before the English people ceased to hanker for a revival of the glories of Henry V; and for that purpose parliament did not grudge the king ample financial support.

Burgundy - in either sense - was by tradition and by interest a desirable ally. Edward was no mean strategist and had never been defeated in a stricken field. He certainly could not have conquered France, but if he had meant war in earnest he would probably have conducted some brilliant campaigns. But he did not mean war in earnest.

Treaty of Pecquigny
He got his money, and carried his army to Calais; but there was no fighting. Louis was prepared to buy him off, and he himself wanted nothing better than to be bought off. Edward cheerfully deserted his ally Burgundy with the excuse that Charles had disabled himself for co-operating in an effective campaign. Fifteen thousand pounds down and a pension of ten thousand a year which Edward described as a  tribute," was the price paid to him at the treaty of Pecquigny; a very substantial addition to his income, which was duly paid.