The Rise of Edward IV

Navigate 'A History of the British Nation'
<< The Fall of Henry VI, part 2 - The Rise of Edward IV - The Reign of Edward IV >> 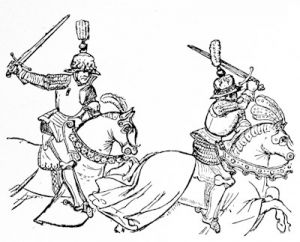 The Duke of Gloucester and the Earl of Warwick in battle

Louis [of France], somewhat hastily, had committed himself to the support of Margaret of Anjou and the Lancastrian faction; Philip was naturally inclined in consequence to favour the Yorkists. Warwick was unwilling to break with Burgundy, but was still more anxious to bring Louis over to the Yorkist side. Louis, realising that, in the language of a modem statesman, he had been "backing the wrong horse," was willing enough to buy the friendship of the de facto king of England.

Warwick proposed to marry King Edward to the French queen's sister, since Louis had neither a sister nor a daughter of his own to offer. To the Earl's intense disgust Edward ruined the whole negotiation by announcing that he had already married Lady Elizabeth Grey, widow of the Lancastrian John Grey, Lord Ferrars, and daughter of' the Lancastrian Richard Woodville, Lord Rivers.

Warwick was angry enough at the trick that had been played upon him, since it showed how slight was his real ascendency over the king. Still, there was no immediate breach; But Edward proceeded to marry his wife's kins­folk right and left to heirs and heiresses, thus forming a new family group wherewith to counterbalance the Neville connection; and Warwick's suspicion and distrust deepened though Edward still treated him as his first counsellor and minister. In spite of the marriage fiasco, he was sent on a diplomatic mission to France and Burgundy. The relations between Louis and Charles the Rash, the heir of Burgundy, were exceedingly strained, and Louis proved as anxious to conciliate Warwick as Charles was careless. The seeds were sown of an alliance between the French king and the earl.

Henry VI captured
Meanwhile, by a stroke of good fortune, the unfortunate Henry VI had been caught wandering about aimlessly in the north, and was lodged in the Tower. The relations between Warwick and Edward were further strained when the latter refused to sanction the marriage of his next brother George, Duke of Clarence, with Warwick's daughter. And now Charles the Bold entered upon a negotia­tion behind Warwick's back for his own marriage with the English king's sister Margaret. Warwick was again sent off ostensibly to negotiate a treaty with Louis, and returned accompanied by a French embassy to discover that the marriage treaty with Charles was already settled.

Robin of Redesdale's Rebellion
Edward remained indolently blind to the danger that was brewing. Warwick in alliance with Clarence was preparing to play the old part of the Lords Ordainers and the Lords Appellants. When nearly two years had passed, half the north suddenly rose under a leader who called himself "Robin of Redesdale," with the usual complaint against "the king's evil counsellors," and the usual demand for their removal.

Edward hurried to the north; Warwick at Calais promptly married his daughter to Clarence, crossed to England, raised the south, and marched upon London. Three weeks after Clarence's marriage Edward was a prisoner.

Lose-Coat Field
To all appearance Warwick's victory was complete, and he was not afraid to release the king after executing Rivers and one or two others of the Woodville group. But a futile Lancastrian rising in Lincolnshire gave Edward his opportunity. He collected a considerable force to sup­press the rising, and having demolished the rebels at the battle called Lose-Coat Field, he announced that Warwick and Clarence were implicated in the treason. Since he already had an army in the field, the earl and the duke could only take a hasty flight to France.

Then the craft of Louis XI came into play and brought about nothing less amazing than a reconciliation between Warwick and Margaret of Anjou, to be confirmed by the marriage of Warwick's younger daughter Anne to Margaret's son Edward, the titular Prince of Wales. Clarence was apparently satisfied by being recognised as the next prince of the blood. Edward had underrated the strength of the Nevilles.

Henry VI released
Warwick repeated his previous device; Edward was enticed to the north to suppress an insurrection organised there, while the earl himself again landed unopposed in the south and proclaimed Henry VI. Half Edward's troops belonged to the faction not of York but of Neville, and deserted him. Edward in turn was obliged to fly from the country in hot haste to take refuge with Charles of Burgundy. Again Warwick's victory seemed complete, and Henry was brought out from the Tower to be posed once more as king.

But Clarence — "false fleeting perjured Clarence" — was already in communication with the exile. In the spring Edward made a sudden dash from Flanders, and landed in Yorkshire, where he began by announcing that be had returned to claim not the Crown but the Duchy of York. The York­ists of the north hastened to his standard. By consummate generalship he prevented the Lancastrian levies from effecting a junction, was joined by Clarence, and, having completely misled Warwick as to his designs, suddenly directed his march from the west upon London with the earl in hot pursuit. He reached his goal first, was admitted into the city, shut Henry up again in the Tower, and marched out to fight the earl.

The Battle of Barnet
The hostile forces met in a thick fog at Barnet. In the mist Warwick's left and centre attacked each other, each at first thinking that the other was the enemy, and then that they were traitors. The blunder decided the day, which otherwise seems to have been going in favour of the Lancastrians. Warvick was slain on the field, his forces were completely put to rout.

The Battle of Tewkesbury
On the same day Margaret landed in the west. There she rallied her adherents, and was on the march to join another band of her partisans on the Welsh border, when Edward by desperate marching succeeded in intercept­ing her and forcing a battle at Tewkesbury. There he won the decisive victory which made him indisputably King of England. Margaret herself was taken; the young Prince of Wales was killed, probably in the battle, not, as a later tradition asserted, in cold blood by Edward's youngest brother Richard, Duke of Gloucester.

Death of Henry VI
No one of the line of Henry VI except Henry VI himself remained alive; and of the Beaufort blood only the young son of Margaret Tudor, Henry, Earl of Richmond, and the young Duke of Buckingham, the son of the other Margaret Beaufort. It was the least of Henry VI's misfortunes that he died in the Tower a few days after Tewkesbury, almost certainly by the hand of the Duke of Gloucester, though of course it was announced that his death was a natural one.