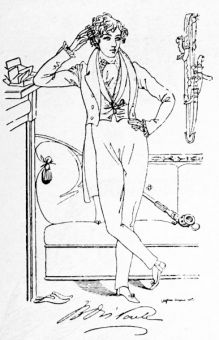 Benjamin Disraeli, from an early portrait in the Maclise Portrait Gallery

The death of Palmerston involved little change in the ministry, but it restored Earl Russell to his old position as leader of the Liberal party, and it removed the great check upon the activities of the more advanced section of that party.

Forty years before, Russell had already been con­spicuous as the importunate advocate of parliamentary reform; and if he had declared himself satisfied with the great Reform Act, he had nevertheless for several years past been an advocate of further franchise exten­sion.

The question, however, was one on which it was almost certain the Liberals would split, since the Palmerstonian section was averse from any further democratic movement. But before the meeting of the Parliament which was destined to take up the question of reform, Irish affairs once more assumed a prominence which they had lost since Smith O'Brien's abortive insurrection in 1848.

Ireland
The destitution of the Irish peasantry intensified by the famine had brought about an immense emigration to America. Under the then existing conditions of industry and agriculture the country had become over-populated; emigration relieved the strain, the excessive supply of labour in comparison with the actual demand was diminished, and the state of the country generally appeared to improve.

But the emigrants departed to America with bitterness in their hearts, and the Irish in the United States became a new and disturbing factor in the Irish problem. In their eyes the root cause of the evils which had driven them into exile was the British dominion, and for many of them the release of their native country from what they regarded as a foreign yoke became a passion.

The Fenians
In 1858 the Fenian Brotherhood was formed among them, a secret organisation having, severance from England as its avowed aim and secret warfare as its avowed method, 'since open war was out of the question and force was regarded as the sole possible instrument for achieving the end in view.

The strength of the movement lay in America, for it was essentially political, neither agrarian nor religious, appealing very little to the Irish peasant and not at all to the Irish priest. And the organisation gathered a new strength from the American Civil War. Irishmen fought in the ranks on both sides, and learnt something of discipline and of military organisation; and the leaders were not without hope that the hostility to the British which had been aroused in America, might be utilised to further their schemes.

Secret societies, however, rarely remain for long exempt from the activities of informers. Acting upon information, the Government in Ireland suddenly arrested a number of the Fenian ringleaders and seized their papers. They were condemned to long terms of imprisonment, and the widespread character of the conspiracy was revealed. The Habeas Corpus Act was suspended, numerous other arrests were made, there was a hasty exodus of Fenians, and the United States Government dashed all hoped of assistance from that quarter by suppressing raids over the Canadian frontier.

Reform Bill(s)
In March Lord Russell's Reform Bill was introduced by Gladstone who had succeeded Palmerston as leader of the Liberals in the House of Commons. The county franchise was to be lowered to ?14 and the borough franchise to ?7. It was estimated that Some four hundred thousand voters would thus be added to the register. The bill went far enough to excite the alarm of the Conservative element, but not far enough to arouse enthusiasm on the other side.

It was opposed by a section of the Liberals who were nicknamed the "Adullamites" by John Bright, who likened them to the followers of the outlawed David. The bill passed its second reading by a majority of only five, and an adverse vote in committee induced the Government to resign. For the third time Lord Derby took office, with Disraeli as his Chancellor of the Exchequer and leader of the House of Commons.

The introduction of the Reform Bill had been received in the country with apparent apathy, but its rejection aroused a surprising amount of resentment. A great Reform demonstration was announced to be held in Hyde Park.

At the last moment the authorities closed the park gates, and it was not surprising that the mob which assembled broke down the park railings and behaved with considerable violence, and disorderliness, though no very serious damage was done and no lives were lost. A vigorous oratorical campaign was opened in the country, and the result was that when Parliament met again at the beginning of 1867. Disraeli had persuaded his colleagues that they must carry a Reform Bill themselves.

Compound householders
It was Disraeli's intention to follow the precedent of the India Act, removing the bill out of the sphere of party politics and proceeding by resolutions on which a bill was ultimately to be based. The plan failed. The central idea of Disraeli's scheme was to admit working-men to the franchise, but to check the power given them through their numerical preponderance by multiplying the votes of the educated and propertied classes.

The last bill had been defeated on an adverse motion substituting rating for rental as the basis of qualification for the franchise, a difference of which the main effect was to exclude the "compound householder," the man who in paying his rent compounded

Accordingly the resolutions for the new bill set £6 in the boroughs and £20 in the counties, on the rating basis, as the qualification but sundry "fancy franchises" were added giving a separate vote apart from property qualification ministers of religion, university graduates, and any one who had £30 in the savings bank,£50 in the funds, or who paid 20s or more of income tax.

The reception of the resolutions was unfavourable; they were thereupon withdrawn under promise that a fresh bill should be formulated, and some Conservative stalwarts retired from the ministry, most notable among whom was Lord Cranborne, who was destined at a later day, as Marquess of Salisbury, to lead the Conservative party.

Lord Derby's leap in the dark
The new bill when introduced proved to be more democratic than the resolutions. It proposed to give the franchise in the boroughs to all householders who paid their own rates, with a fifteen pound rating franchise in the counties. But the fancy franchises remained, with the further proviso that they conferred an extra vote on those persons possessing them who were otherwise qualified to vote as householders. The bill as it stood was acceptable neither to the advanced Liberals nor to the cautious Conservatives. Lord Derby himself described it as a "leap in the dark."

To Disraeli it was a party bid for popular favour, intended, as Derby phrased it, to "dish the "Whigs"; but at the same time it expressed his own genuine convictions first that the people ought to be admitted to a larger share of political power, and, secondly, that education and intelligence should be called in to counterbalance the mere counting of heads.

In the eyes of Liberals the fancy franchises were of course a mere party move to increase the influence of Conservative voters; The one unmistakable fact about the bill was that it would not go through unless it was made acceptable to the Opposition, and the Opposition was by no means at one. A number of Liberals voted against Gladstone's amendment that there should be a five pound rating limit, and that above that limit the compound house­holder should have the vote.

Gladstone however recovered his mastery of the party, and it would be difficult to say whether the Act which was finally passed was more his or Disraeli's. Double votes and the fancy franchises disappeared. In boroughs the householder and the £10 lodger were qualified after a year's residence. In the counties the qualification was lowered to £12. The compound householder difficulty was solved by an amendment which abolished compounding in parliamentary boroughs.

No borough with a population of less than ten thousand was to have two members. The members thus removed were in part added to the county representation, nine new boroughs were created, and six large towns acquired an additional member. Corresponding but not identical Acts were afterwards passed for Scotland and Ireland.

The grand practical effect of the whole was that the urban working-man acquired a vote but the agricultural labourer did not. The latter remained without the franchise till seventeen years later.