Britain and the American Civil War 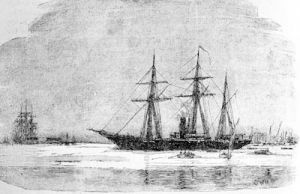 The Alabama, from a sketch by Charles W. Wyllie

Altogether different [than the British attitude to the Schleswig-Holstein crisis] was the tone adopted by the British Government in relation to the great civil war which broke out in the United States of America early in 1861. There the attitude assumed was one of determined neutrality. The Southern States declared their right to separate themselves from the union and form a distinct confederation.

Their ostensible reason for doing so was the claim of the central government of the whole body to exercise over the separate states a larger control than it was entitled to in the eyes of those states. The immediate cause was the growing determination of the Northern States to abolish slavery.

Popular sentiment was violently divided, the passionate horror of slavery drawing one section of the public into fervent sympathy with the North, while the political advocacy of the right of self-government, which in fact had originally brought the United States into being, attracted the sympathies of another section to the Confederates. It must also be remarked that the sporting instincts of the British people were a powerful influence in favour of the South, since it was fighting against heavy odds.

In America, however, British neutrality was viewed with extreme indignation. That the indignation was unjustified is most effectively proved by the fact that North and South felt it in almost equal degree, each being firmly convinced that right was on its side and that it was monstrous for the British not to act on that assumption. The Northerners felt that American nationality was at stake, while to many of them it seemed impossible to question that every right-thinking man was bound to give his whole sympathies to the abolition of slavery.

The Southerners felt that they were fighting for a principle of political freedom which ought to appeal to every Briton; they had been brought up to believe that slavery was a system emphatically sanctioned by Scripture, and half of them were much more alive to the condition of perfect contentment in which most of the slaves lived in the older states than to the ghastly abuses to which the whole system was liable. Therefore neither side forgave the British for not giving it whole-hearted and uncompromising support.

The Trent Affair
The attitude of neutrality was at first advantageous to the South, whose arms were the more successful, for the British Government recognised the South as belligerents not rebels. Sympathy with the South in England was increased by the affair of the Trent, which very nearly involved Great Britain in the war. The Southerners, having set up a government of their own, despatched two commissioners to England and France.

The commissioners reached a neutral port and embarked on a British vessel, the Trent. The Trent was boarded by a Federal warship and the commissioners were carried off. A declaration of war was only averted when President Lincoln gave way to the demands of the British Government and released the commissioners.

The Alabama Affair
On the other hand, the Federals had serious cause of complaint. It was found that ships were built and fitted out in British docks and sailed from British ports with apparently harmless intent, their real destination, to be employed as cruisers by the Confederates, having been carefully concealed. It was claimed that the British Government did not display due vigilance in preventing such action, the most notorious instance being that of the Alabama.

The British Government flatly repudiated the charge, but when the war had terminated in favour of the North, immense claims were brought forward for damages in respect of the depredations wrought by the cruisers.

Immense credit was due to the Government and to the lavish generosity of the general public for the admirably organised efforts to relieve the terrible distress which resulted. But still higher praise is due to the operatives themselves for the splendid self-control they displayed.

Had they clamoured as they might well have done for a refusal to recognise the blockade of the Southern ports as efficient, so that the cotton ships might have sailed, the Government could hardly have resisted. But the Lancashire men, in spite of their own sufferings, would not urge a course which would help in the perpetuation of slavery, and they bore their deprivations with a noble fortitude which exhibited the character of the British working-man in the very highest light.

The resolute neutrality preserved from the beginning to the end of the war was bitterly resented for opposite reasons both by the North and by the South; and in that fact is to be found the very strongest testimony to the essential justice of the British attitude and to the dignified self-control displayed by the Palmerston Government.