The End of Cromwell's Commonwealth 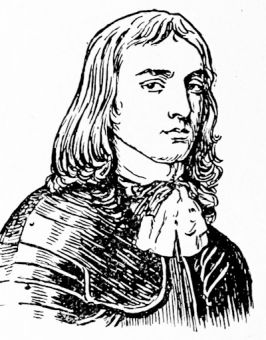 Richard Cromwell, from a miniature by Samuel Cooper, 1664

Oliver [Cromwell] had refused the crown, nevertheless it appeared that he had some thought at least of creating a dynasty; for on his deathbed he named as his successor his son Richard. For that choice there can be no other explanation. Cromwell cannot have imagined that Richard could take his own place as the Atlas bearing the Commonwealth upon his shoulders.

The younger son, Henry, was a man of capacity, who may have been ruled out because of his fiery temper. But Richard was wholly incapable of 'serving as anything more than figurehead, nor had any man come to the front who was in the least fitted to maintain an autocratic rule. The Common&wealth required a ruler, who, whether he was in form an autocrat or not, should be one in actual fact. In January a new parliament was assembled. No one challenged the nominal position of the Protector; no one recognised his authority as a reality.

The immediate question was merely whether the parliament or the officers of the Army were to be the supreme authority. The officers had fixed upon Fleetwood, a capable soldier and Cromwell's own son-in-law, for the vacant post of General-in-Chief. Had Fairfax been an ambitious man, he might have formed a party of his own in spite of his abstention from public life for the last eight years; but he chose to remain in retirement.

Parliament, intent on asserting its own authority, proposed that Richard Cromwell should be made General-in-Chief. Richard, as the head of an army, would have been absurd, but the calculation was that the army would obey its chief, and its chief would obey parliament.

The officers had no intention of submitting to such an arrangement. There was among them no personality of commanding force, but the most active of their leaders was Lambert. The Protector, incapable of taking a line of his own, submitted to the pressure of Lambert and the officers, dissolved parliament in May, and finished the farce of his Protectorship by resigning. Once more the country was without any government which could pretend to a legal title.

Still the Army did not wish to assume official responsibility for the government of the State. Lambert devised the plan of resuscitating the Rump which Oliver had turned out of doors. Here was at least a sort of parliament, whose members had been elected, which, by the Statute of 1641, could never be dissolved except by its own consent. In fact it never had been legally dissolved; it had only been illegally suppressed by an arbitrary authority.

In short, the members of the Long Parliament could clearly claim as a matter of mere law that they were to this day the legal House of Commons; though it would not be so easy to prove that the Commons by themselves legally constituted a parliament, or that the Rump by itself could claim to be the legal House of Commons so long as those other members were shut out who had been excluded by Pride's Purge.

The Rump, however, had no qualms. From December 1640 down to Cromwell's coup d'etat it had acted as the sovereign body of the realm, and had all but succeeded in establishing itself permanently. It was still persuaded that it was the legitimate sovereign, and it acted upon that doctrine. It at once assumed the tone of high authority over the soldiers who had re­instated it, threatened to declare all the proceedings of the Protectorate invalid, and showed every sign of intending to revive all the old pretensions which had made its ejection by Cromwell temporarily popular.

The Cavaliers im­agined that they had found their opportunity in the dis­sensions at headquarters; but if the Army was politi­cally at sea, it understood at least its own business of fighting. The insurrection was crushed at Winnington Bridge, and Lambert returned from this, campaign resolved on another coup d'etat. The Rump found itself shut out from the Chamber. But Lambert was no Cromwell; departmental management was going to pieces, and the soldiery discovered that their pay was not forthcoming.

Before New Year's Day the Rump was back again. But on New Year's Day, General Monk crossed the Scottish Border into England to take control of affairs on his own responsibility.

The first Tudor king of England

He was the father of Henry VIII