England After the Norman Conquest 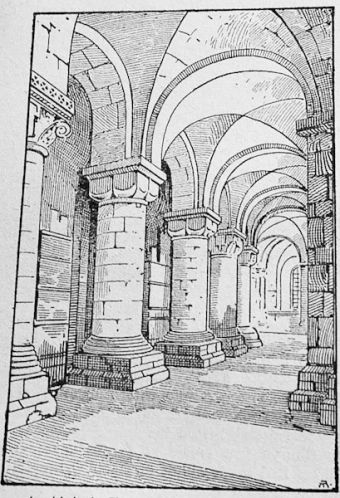 An aisle in the chapel of St John, Tower of London, built by William the Conqueror

In point of law the Norman conquest was supposed to have made no change in the government of England. The old institutions remained in force. The king ruled, taking counsel with his Witan. The freemen still assembled in the shire-moot and the hundred-moot for the conduct of local affairs.

The ealdorman of early days, the earl, by his Latin title the comes, was still the chief man of his earldom, which was again reduced to the proportions of a shire. The king's financial officer, shire-reeve, or sheriff was still the Crown's principal agent in the shire, discharging also certain administrative functions which justified his Latin title of vice-comes.

Similarities
The Crown still descended by election of the Witan from among the royal family, though it was a new dynasty which occupied that position, since throughout the eleventh century the exclusive title of the house of Wessex had been persistently ignored. Still as of old the freeman was bound at the summons of the sheriff to attend the gathering of the fyrd in arms, and still the thegn, the holder of comparatively extensive lands, was bound to bring to the held a following in due proportion.

Still, as before, the soil was tilled on the Open Field System mainly by occupiers bound to render some sort of agricultural service to a large landholder to whose demesne or private holding their holdings were in some sort attached; and still for a time most of these occupiers were politically free men, though they did not hold their land by a free tenure.

Differences
But in substance a very great change had been effected, which is illustrated by the character of the Witan. We have seen that under the Saxon kings the name of the Witan appears to have been, applied both to a sort of inner council consisting of the chief officers of the realm, lay and ecclesiastical, together with some other persons called in by the king; and also to a general assembly, the relic of the old tribal or national assembly, at which, all freemen were entitled to appear, although very few thought it worth while to do so.

It appears, though it is by no means clear, that this double character of the Witan was reproduced in two forms of council - the magnum concilium, great council or council of magnates, and the commune concilium, or general assembly of tenants-in-chief, a term which we shall examine later.

But in less than ten years after the battle of Hastings practically every one of the magnates was a Norman, not an Englishman, interested in strengthening his own class against the hostility of the natives; and the same principle applied to the assembly of the tenants-in-chief, although these included a proportion of English.

The magnum concilium was summoned for general purposes of deliberation, while the commune concilium was called together only when it was desirable that a particular operation or a particular policy should be ratified ostensibly by the nation. Such an occasion was the moot of Salisbury in 1086.

Now, not only were the old native magnates replaced by magnates who were foreigners, brought up in different traditions and wholly out of sympathy with the native population, but the actual powers of the magnates were greatly extended. Under the new system they exercised a much larger personal jurisdiction than before.

In practice it is probable that the official presidents of the folc-moots of the hundred and the shire had exercised an authority which could without any great difficulty be translated into an independent jurisdiction; but the actual result now was that a vast amount of actual jurisdiction was transferred from the folc-moots to the local magnates, the lords of the manor, who, in the great majority of cases, were Normans.

The law previously referred to concerning the murder of Normans shows how the conquering race, a handful planted among a hostile population, felt it necessary to make special regulations for their own protection, and it is natural that they should have found means to evade the jurisdiction of native popular tribunals, more or less as the British in India insist on a similar security for themselves. But consciously or unconsciously the innovation was enormous, while it pretended to be at the most an adaptation of the existing system.