William the Conqueror and the Church 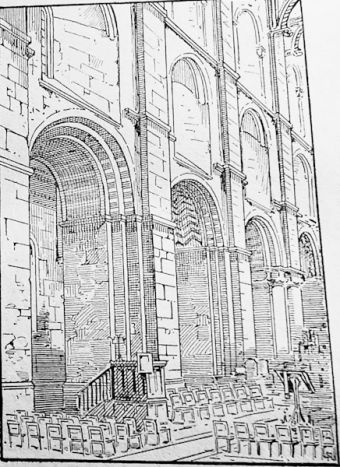 Arches in the nave of St Albans Abbey Church, built by Abbot Paul between 1077 and 1093

When the Duke of Normandy claimed the crown of England he obtained the papal blessing for his enterprise from Pope Alexander II, under the guiding influence of Hildebrand, who himself succeeded to the papacy as Gregory VII in 1073.

Hildebrand was the incarnation of that papal policy which claimed for the Vicar of Christ a supremacy over all temporal rulers; for the voice of Christ's Church an authority to which all merely temporal authority must submit; and for the whole clerical order, Christ's ordained ministers, a position independent of the secular state and separated from its jurisdiction.

The remoteness of England had at all times kept the clergy of England from feeling themselves practically amenable to the discipline of Rome; and the Conqueror secured the papal favour partly because it was certain that the insular separateness of the Church of England would be broken down by the infusion of a large Latin element, and by the introduction in high places of French and Italian clergy bred within the sphere of the Roman influence.

Lanfranc
This was one practical effect of the Conquest. Vacant bishoprics and abbacies were filled up with the foreign clergy, who enforced the stricter discipline on which Hildebrand and the whole of his school insisted. The uncanonical Archbishop Stigand was deposed from the see of Canterbury, and the reorganisation of the Church was entrusted to his successor, Lanfranc of Pavia, whom William had made abbot of Caen eight years before.

William and Lanfranc understood each other thoroughly; and neither the king nor the archbishop had the slightest intention of surrendering to Rome a jot of their own authority in England.

Whatever Hildebrand may have expected, the papal demand that William should acknowledge himself as holding England as a fief of Rome met with courteous but unqualified rejection. William would admit no question that the king was supreme in his own dominion, and that no man, lay or clerical, should appeal against his authority to any other authority whatever. Such duty as his predecessors on the English throne owed to the Pope he too would pay, but nothing more.

Lay Investiture
Gregory launched thunderbolts against every one who should be concerned in what was called Lay Investiture, a subject which continued to be a burning question until well into the twelfth century; but William was supported by Lanfranc in maintaining the right of the king of England to control important ecclesiastical appointments.

Celibate clergy
Gregory insisted on the celibacy of the clergy, secular as well as monastic. But whereas all monks were under an express vow of celibacy, the clergy outside the "regulars" or monastic orders were under no such vow, and their marriage was merely forbidden as a matter of discipline. Hence the prohibition had been very commonly disregarded.

Justice - ecclesiastical and secular
Therefore, in spite of Gregory, all marriages already contracted by the clergy were in England recognised as valid, though no marriages contracted after the papal decree were to be recognised.

One substantial change, however, was made by William and Lanfranc, in the complete separation of the ecclesiastical from the secular courts of justice, probably in 1076; and in the same way somewhat earlier was instituted the practice that the clergy assembled at the Great Council should deliberate apart for the framing of ecclesiastical legislation.

The separation of church and state
In other words, the principle of differentiation between clergy and laity, of emphasising the distinction between them, which was an essential part of Hildebrand's policy, was accepted and acted upon by William and Lanfranc without setting Church and State in antagonism, but with the effect in later years of bringing whatever antagonism there was between Church and State into more marked relief.