England before the Hundred Years War 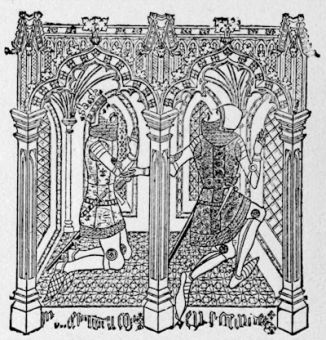 Robert the Bruce's legacy
Robert Bruce had achieved the liberation of Scotland, and had organised a government which was effective so long as he lived, supported by the able and patriotic captains who had helped him to his triumph. But he had left the seeds of trouble, by the forfeiture of the estates of sundry Norman nobles who had failed to support his cause. Moreover, he left on the throne a six-year-old son by a marriage in his later years, though his elder daughter Margaret was the wife of the hereditary Steward of Scotland.

The government was safe in the hands of the Regent Randolph; but the prospect if he should die was not too promising. The disinherited nobles, and in particular Edward Balliol, the son of the old King John, were eager to find an opportunity for their own reinstatement.

Balliol's bid for the throne
In 1332 Randolph died, leaving no one with the ability to take his place adequately. Edward Balliol at once struck for the Crown, supported by the "disinherited" and by many of the Border lords. A force sailed from England - it was not allowed to make an invasion across the Border – landed on the coast of Fife, and at Dupplin Moor routed a large army collected by the new regent, the Earl of Mar. The victory was achieved by the combination of archers, this time, with foot soldiers massed after the fashion of the Scots themselves; while the blunder of Bannockburn, which had there exposed the archery to destruction by the attack of a small body of horse, was not repeated.

Dupplin Moor was decisive for the moment, and Edward Balliol was crowned. Three months later he was a fugitive; but in the interval he as King of Scots had made a new treaty with England. This Edward was pleased to regard as cancelling the treaty of Northampton; and thenceforward, till the course of events turned his attention from Scotland altogether, he gave active support to the pretensions of Balliol.

Halidon Hill
In the following year (1333) he led an army into Scotland, and Dupplin Moor was repeated at Halidon Hill. The tactics here developed, out of those employed at Falkirk and Maes Madog, were destined to make the English arms invincible for a century to come whenever they were brought into play.

Balliol was now again King of Scots, placed on the throne emphatically by the English arms; and he forthwith handed over half the Lowlands to the King of England, to whom he also did homage for the rest of the kingdom. The Scots declined to accept the situation. They sent off David and his wife Joan, the king and queen whom they recognised, to France for safety, and despite the lack of a leader prepared to fight.

The Disinherited, replaced in their estates, proceeded to quarrel. Instead of fostering and strengthening Edward Balliol, Edward of England treated him with ostentatious distrust. In spite of annual incursions on the part of the English, continued until 1336, Balliol's cause gained no ground; the Scots avoided any pitched battles with the invaders, and reverted to the guerilla warfare so successfully practised by Robert Bruce and his captains; and in 1338 Edward's attention was finally absorbed by France so completely as to forbid the idea of his again attempting effective intervention in Scotland. A year later Balliol himself was ejected, and in 1341 David returned to his kingdom as its acknowledged monarch.

For England itself these were years of recovery from the endless broils, revolutions, and counter-revolutions under which the country had been suffering ever since the death of Edward I. The most prominent incident, if it may be called an incident, is the record that in 1332 and 1333 the knights of the shire became definitely associated with the borough representatives in a House of Commons, instead of with the barons, in the parliament of the three Estates; though the time when the clergy ceased to act as an Estate of parliament is uncertain. But in France events were taking place which were leading up to the outbreak of the Hundred Years' War.

In 1328 the French King, Charles IV, died; like his brothers, leaving no son behind him. A child born posthumously proved to be a daughter. From the days of Hugh Capet, the first of the reigning line, son had invariably succeeded father except when, failing a son, a brother had succeeded. There had been no female succession, or succession through a female. The French now assumed the principle of the male succession, and forthwith acknowledged as king Philip of Valois, the nephew of Philip IV and first cousin of the three brothers who had reigned since that king's death.

Isabella claims France
Now no one disputed the doctrine that a woman was not herself eligible for the throne; but laws of succession had not been definitely and decisively formulated; they varied in different countries and in different parts of one country; and there was a custom quite familiar in France, by which the succession to an estate might pass on to the son of a woman who was herself precluded from the succession by her sex.

Accordingly, when Charles IV died, his sister Isabella, the queen mother of England, made a formal claim in favour of her son, as being nearer to the throne than his cousin of Valois. There was nothing absurd or irregular about the claim, which was based upon one of the recognised customary grounds of succession.

But it practically rested with the French nation to choose at this stage which of the various customs prevalent should be adopted in deciding permanently the course of succession to the French throne. They did not greatly trouble themselves over the technical pleas with which lawyers subsequently amused themselves; but finding that their choice lay practically between the first noble of France and the king of a foreign country, they did not for a moment hesitate in choosing Philip.

It is not without interest in this connection to notice that, a century and a half later, Henry VII claimed the throne of England through his mother, but for himself, not for her; and although succession in the female line was maintained, it was held until the reign of Henry VIII. to be a matter of doubt whether a woman could in her own person succeed to the throne.

In 1328 Isabella's claim on behalf of her son was rejected by the French baronage, and was unsupported even by the barons of Aquitaine. It is to be observed, however, that even at this stage the cities of Flanders whose Count was a vassal of the French Crown, were prepared for reasons of their own to support Edward's title.

War on this account was, however, out of the question; Edward accepted the accomplished fact, and did homage to Philip for his French possessions; and outwardly the two kings became very good friends. Nevertheless two bones of contention remained. Philip would not abandon his friendly attitude to the Bruces, and gave young David shelter in his court when Edward Balliol was reigning as de facto King of Scotland. Also the conflicting rights of the King of France and of Edward, as Duke of Aquitaine, remained unsettled.

The Hundred Years War
The differences, in fact, over Aquitaine were such that they could hardly in any case have been settled except by the arbitrament of war. There was no reconciling the irreducible minimum of the respective claims.

So in 1336 Edward was already engaged in diplomatic efforts to secure the alliance of the Counts of the Netherlands, Flanders, Brabant, Hainault, and others, and of the German Emperor Lewis of Bavaria himself. At the end of 1337, Edward renounced the homage which he had rendered while still a minor to Philip, and again put forward his own claim to the French Crown.

Hostilities of an informal character opened with conflicts in the Channel and on the Channel coasts between the seamen of England and of Normandy. In 1338 Edward had secured Brabant, and his alliance with the German Emperor was ostentatiously established. In 1339 the long-drawn-out preliminaries came to an end, and the contest known as the Hundred Years' War was fairly joined.