The Beginnings of the Hundred Years War 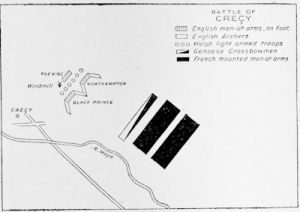 English and French at Crecy

The old idea that the Hundred Years' War was a piece of wanton aggression on the part of King Edward, having for its object the usurpation of the French Crown, has long been abandoned. The real point at issue, the But the land campaign was as futile as the last, and a truce was signed which remained in force till 1345.

Edward, who had lavished large subsidies on his German allies, who made little enough practical return for them, was already in serious financial difficulties, and had incurred heavy debts to the Flemish cities; and it was only by the ignominious expedient of secret flight that he was able, after signing the truce, to escape to England, leaving his debts unpaid. Attributing his embarrassments to the neglect of the officials whom he had left in charge of affairs in England, he attacked Archbishop Stratford, who, however, was able successfully to assert his title to be tried by his peers, and to procure a statute rendering the king's ministers responsible to parliament.

We may, however, set aside constitutional questions at present and proceed with the story of the war, which was in effect continued in spite of the truce. Theoretically France and England were at peace; but a question of succession arose in Brittany between John de Montfort and Charles of Blois. The two kings supported the rival claimants; each of them as regards Brittany reversing the doctrines of succession by which he himself claimed the throne of France. From the English point of view this phase of the contest is chiefly notable on account of the battle of Morlaix, where the Earl of Northampton, in command of the English, won a victory over superior forces, by employing the archery tactics of Halidon Hill and Dupplin Moor for the first time on Continental soil.

However, under these conditions the pretence of truce could not long be maintained. In 1345 it came to an end. The king, now in dire need of money, cheerfully repudiated his enormous debts to the financial houses of Florence; thereby very nearly ruining that city and cutting himself off from the sources from which he had hitherto managed to borrow.

The Battle of Crecy
A new campaign was opened, this time in Gascony; but the great interest centres in the northern cam­paign of 1346. In that year Edward in­vaded Normandy, and within two months had advanced almost to the walls of Paris. But Philip had collected a very much larger army, and Edward resolved to fall back to Flanders, with the French in pursuit. Having with great difficulty effected the passage of the Somme, he took up his position, on August 26th, on the famous field of Crecy, where he turned to bay.

Archery wins the day
Crecy typifies the English tactics which found their origin in the Welsh and Scottish wars of Edward I and were now perfected by Edward III. The approaching French outnumbered by four to one the English, who would have been doomed to destruction in a contest on the normal medieval principles, which decided battles by the weight of charging masses of heavily armoured horsemen. But the Flemings and Scots had both proved that massed bodies of spearmen could stand their ground against any cavalry charge, though their resistance could be shattered, as at Falkirk and Halidon Hill, by bringing archery into play. Edward III was now to prove that the combination of infantry with archery could not only beat off but could an­nihilate an attack which relied wholly on cavalry.

The battle
Like Bruce at Bannockburn, Edward drew up his forces with a narrow front, flanked by ground not available for cavalry. The front was ranged in two divisions, a third being held in reserve; while archers were thrown forward on either flank of each division, where, if attacked, they could fall back to cover. The regular foot soldiers were strengthened by dismounted horsemen, again as at Bannockburn, while only a few hundred men were held in reserve. The French, though they arrived late in the day, resolved on an immediate attack. They advanced troops of Genoese cross-bow men, but the cross-bow was helpless against the long-bow. The Genoese were shot down before they had the English within range. The chivalry of France clamoured for the charge, and crashed forward, riding down the hapless Genoese. A storm of arrows poured upon the flanks of the charging columns, driving them instinctively to huddle together, and rolling over horse and man, so that they were already in helpless confusion long before they reached the masses of heavy infantry.

Again and again they charged with desperate valour, but only for a brief moment did any of them succeed in breaking into the English lines. Light armed Welshmen dashed out to slaughter and strip the fallen; the rout was as complete as that of Bannockburn; vast numbers were slain; the flower of the French nobility were either taken prisoners or left dead on the field.

Calais
Complete though the victory was, Edward could make no use of it except to continue his march to the coast unmolested. There, however, he settled down to besiege Calais; a port from which English shipping had suffered much injury, while its capture would provide a permanent gateway for entering France. For almost a year Calais held out stubbornly, but was finally starved into a surrender more famous for its medieval picturesqueness than even for its political importance; a story too familiar to be repeated here.

Neville's Cross
In the interval another success attended the English arms. As the ally of France, David of Scotland, who had recovered his throne in 1341, seized the opportunity in the autumn of 1346 to invade the north of England while Edward was in France. The invasion failed to relieve David's ally by drawing back troops, as was intended, for the defence of the north; which very successfully took care of itself. At the battle of Neville's Cross the Scots were routed and David was taken prisoner.

Truce
But in spite of victories the financial strain of the war was too great for Edward's resources, and in England the limit of popular endurance, though the general prosperity had been increasing so rapidly that the nation could have borne much heavier burdens without serious suffering. Moreover, Edward's allies were doing him no service; so, having secured Calais and transformed it into an English town, the English king agreed to a truce in September 1347. The truce continued for eight years, although miscellaneous fighting was going on all the time. In 1354 the Pope nearly succeeded in negotiating a definitive peace, which would undoubtedly have been welcomed by the peoples of both France and of England. Edward was prepared to resign his claim to the French Crown if the quarrel over Aquitaine were settled by the grant of full sovereignty in Guienne and the disputed provinces. But the French king refused to give way, and the English Estates supported Edward in reviving the war in 1355.

The Black Prince
Military operations were renewed on an extensive scale. The king's son, Edward the "Black Prince," who had won his spurs at Crecy, was despatched to Aquitaine, while the king himself intended to operate from Calais. The second movement, however, was paralysed, since the Scots effected a successful diversion by capturing Berwick and drawing Edward back to England in haste. But that winter the Black Prince devastated French territory in the south, while the king himself carried fire and sword over the south of Scotland in the raid known as the Burnt Candlemas. Also he resumed his grandfather's title as not only overlord but actual King of Scotland in place of Edward Balliol, who formally resigned his own futile pretensions in his favour. Then in Normandy and Brittany the tide of war surged to and fro, mainly in favour of the English.

Battle of Poitiers
But the grand event of the year 1356 was the Black Prince's incursion from Bordeaux into the regions of the Loire, which culminated in the brilliant victory of Poictiers [Ed. More usually called Poitiers]. On this occasion, as in many other of the French battles, the force commanded by the prince was immensely outnumbered by the French; while it was largely Gascon, not English, and was accompanied by only a few archers.

The details of the battle are unusually obscure. Almost for the first time both sides fought on foot, but the English had the advantage of the slope. The decisive blow, however, was struck when Edward executed an unsuspected turning movement with the reserve force of mounted men, who instead of having fled as was generally supposed, appeared suddenly on the French rear, fell upon them, and turned what was already almost an assured repulse into a total route. Both the French King John and his youngest son Philip, afterwards Duke of Burgundy, were taken prisoners.

With the two kings of France and Scotland in his hands Edward was now in a strong position for dictating terms. France fell into a condition of anarchy. English soldiers fought for their own hand as captains of "free companies." The peasantry broke out in the desperate revolt known as the Jacquerie. Edward released David of Scotland for a ransom which the Scots king was never actually able to pay in full; but the terms of peace for France included not only a huge ransom to the king, but practically the cession in full sovereignty of all that had ever been held in France by an Angevin King of England.

Peace at last?
In spite of her miseries France would not yield. In the winter and spring of 1359-60 the war was renewed with increased fury; but in May the hostilities were stopped by the temporary treaty of Bretigny. Edward renounced his claim to the French throne, and John his claim to the allegiance of the disputed districts of Aquitaine. All Aquitaine, and in addition the substantial north-eastern district which came to be known as the Calais Pale, was ceded in full sovereignty to the English king; but in the final treaty of Calais the first-mentioned clauses of the treaty of Bretigny were not actually embodied. Peace, it seemed, had come at last.