The Fall of Cardinal Wolsey 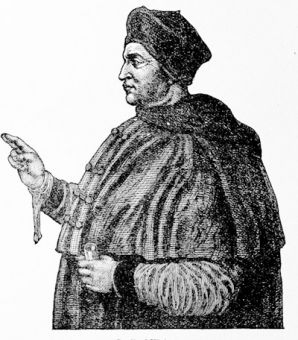 Cardinal Wolsey, after the portrait by Holbein

Sir Thomas More
A reformation, as we have seen, was in actual progress in England. The "intellectuals" found favour in high places; the leading churchmen belonged to the group, and the one English layman with a European reputation, Sir Thomas More, was greatly sought after by the king — rather to his own annoyance. Moreover, the intellectualism was broad-minded, not self-centred; and it strove honestly and zealously to educate the people.

The churchmen themselves were conscious of being excessively absorbed in temporal affairs, and many of them were sincerely desirous of a relief therefrom, although Wolsey was himself a conspicuous example of the worldly prelate. Of the monasteries specifically, we shall have to speak later. The standard of clerical morals was not particularly depraved, and the general tendency was certainly towards the higher standards. It was a long time, too, since the Church had set itself to do battle with the secular authority. Aggressive heresy was suppressed, but with a comparative gentleness. It might, in short, have been fairly anticipated that sweet reasonableness was destined to triumph.

It is no doubt probable that the undercurrent of Puritan zeal would in any case have proved too strong for mere liberalism; but it was the action of the king himself which swept England into the revolution. Henry, after some fifteen years of married life with Katharine of Aragon, determined to marry one of her maids of honour, Anne Boleyn. This involved the nullification of his marriage with Katharine, which again required the papal assent.

When Henry found that the papal assent was refused, he resolved to take the law into his own hands, which involved the repudiation of the papal authority and the substitution of that of the Crown. The complete subordination of the Church to the State was the logical corollary, and the methods by which that subordination was carried involved a complete breach with tradition entailing an internal struggle which ended by ranging England on the side of Protestantism.

Henry's ostensible motive for seeking what is always, though incorrectly called a "divorce" from his wife, was a conscientious conviction that the papal dispensation which had sanctioned his marriage with his brother's widow was invalid — such a marriage being contrary to the moral law of God, as distinguished from the law of the Church, to which the dispensing power of the pope applied.

Henry's argument
Henry's contention was that marriage with a brother's widow was in the same category as marriage with a sister. But Henry was not content with the obvious remedy which should have satisfied conscience, namely, that he should live as a celibate instead of as a married man. He was determined to marry again, which he could not do unless the marriage itself were nullified. For remarriage there was a very strong political reason. Of the children born to him by Katharine, male and female, only one had survived, the Princess Mary; and the succession of a woman, even if it should be undisputed, as was by no means likely, would certainly be fraught with dangers in the future. So far statesmanship endorsed Henry's desire.

But it is further perfectly certain that Henry was bent not merely on remarriage, but on marriage to Anne Boleyn, that lady being astute enough to reject his advances on any other terms, although statesmanship could not possibly approve.

Wolsey's dilemma
Wolsey found that his master expected him to subordinate all other considerations to procuring the divorce. But Katharine was the aunt of the emperor, and after 1527, Pope Clement dared not incur the emperor's wrath by acceding to Henry's wishes. Wolsey, on the one hand, desired the divorce, but, on the other, he did not desire the marriage with Anne Boleyn; consequently he incurred the hostility, both of the queen herself and of the Boleyn party.

Now, if the case were to be settled by Clement in Rome, it was tolerably certain that he would not venture to give Henry the verdict he wanted. It was possible for Wolsey to take the responsibility upon himself, since by the king's desire he had been appointed papal legate, and in virtue thereof was the supreme ecclesiastical judge in England.

But Wolsey had no mind to be made directly responsible, especially as there was no security against an appeal from his decision as legate to Clement himself. His aim therefore was to procure a court which he could control, but whose judg­ment the pope would be committed to accept. Thus the affair would be practically in Wolsey's hands, while the ultimate responsibility could still be laid on Clement. But all that he could succeed in procuring was a commission consisting of himself, with another legate appointed ad hoc Cardinal Campeggio; while the decision of the commission was still to be referred to Rome for confirmation.

Between the emperor and the King of England, Clement's most earnest desire was to evade giving any decision at all. He procrastinated to the utmost of his power, and instructed Campeggio to do the same. Katharine was determined to fight to the last gasp. Although the commission was sanctioned early in 1528, the proceedings of the court were not opened until June 1529.

It was manifest that popular sympathies were entirely on the queen's side; while the Boleyn party were doing everything they could to undermine Wolsey's influence with the king. Before the proceedings could be completed, a consummation which Campeggio was careful to delay, Clement revoked the whole case to Rome.

Wolsey's Fall
Charles and Francis came to terms and the prospect disappeared of utilising French pressure to counterbalance the emperor. Wolsey had failed to do what the king wanted, and the king struck. Campeggio had hardly embarked when a summons was issued against Wolsey for acting as legate in breach of the Statute of Praemunire.

Wolsey was deprived of all his offices, though at the beginning of the next year he was reinstated in the Archbishopric of York and was permitted to retire to his diocese. Some months later he was arrested on a charge of treason and died at Leicester Abbey on the way to London. One voice only had been raised in his defence, when his former secretary, Thomas Cromwell, opposed in the House of Commons a bill which had been introduced to deprive the Cardinal of office for ever.

Before Wolsey had actually fallen, his ruin was assured. Had the legatine court annulled the marriage with Katharine, Henry would have married Anne, and the cardinal would have been sacrificed to the new queen. If the divorce proceedings failed, Henry was determined to bring pressure to bear on the pope, for which Wolsey would have been a most inappropriate instrument. The pope was to be made to feel that he could not ignore the wishes of the King of England without paying a heavy penalty.

An anti-papal and anti-clerical policy was likely to be popular, and Henry resolved to take the nation into partnership, to make it share the responsibility for his policy. Only twice during, the twenty years of his reign had he called parliament; for the next ten years, parliament was to be the instrument whereby the king obtained his ends.

The Reformation Parliament
The assembly which met at the end of 1529 was not dissolved till its seventh year, and is variously known as the Seven Years or Reformation Parliament. It was not till some time after Wolsey's death that any one person again became prominently the first, minister of the Crown; but it is certain that Thomas Cromwell, Wolsey's former secretary, was very soon taken into the royal favour; and it is probable that he at once secured the royal confidence and shaped the king's policy.

For, though Henry chose the ends which he set before himself, he was not, when left to himself, skilful in his application of means. Whenever he went behind the cardinal's back, he failed; and when he forced the cardinal to act against his own judgment, he went wrong. After Cromwell's death, he showed no real grip of government. Hence it may be assumed that throughout the decade in which he appears conspicuously as a strong man, he was guided by a more astute politician than himself.