The Reformation in Europe 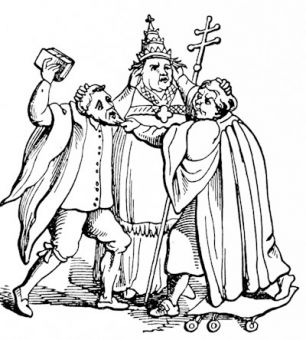 The Pope strugggling with Calvin and Luther, from Jaime, 'Musee de Caricature'

The occasion of Martin Luther's challenge to the papacy was the desire of Pope Leo X to procure funds. A method of raising funds not infrequently employed had been the sale of indulgences. The theory of the Church was that the penitent sinner might obtain from the Church, but not without the mediation of the Church, absolution and pardon for his sins, subject to the performance of the penance imposed by the Church, as the expression of the sinner's penitence. The penance imposed not infrequently took the form of some expenditure on behalf of the Church.

Indulgences were in the original idea pardons granted without the imposition of any other penance than the price of the indulgence. But unfortunately in the eyes of every one concerned, the pope, his agents, and the public, the sale of indulgences assumed the appearance of a simple commercial transaction whereby absolution could be bought cheaply, the necessity for repentance being overlooked, to the material profit of the papal treasury. The lay princes, who might otherwise have protested against the abstraction of their subjects' money by Rome, made no objection when they received a substantial commission on the sales.

But to Luther the whole thing appeared a monstrous blasphemy. When the papal commissioners were coming to Saxony, he publicly de­nounced indulgences, and persuaded the "Good" Elector of Saxony Frederick, to forbid the sale in his dominions. This was in 1517. Such a matter might have ended by the immediate citation and punishment of Luther as a heretic. But Leo had more important matters on his mind than the opinions of a university professor.

Luther, having issued his challenge, realised that the theological conceptions upon which he had acted, and in which he intensely believed, were incompatible with the recognised teaching of the Church, and were in fact closely akin to those for which Wiclif and Huss had been condemned as heretics, if he and they were right, the Church was wrong. If the Church was wrong, the existing system was based upon a lie.

Luther resolved to fight at all costs for the truth as he conceived it. He proclaimed the truth; but at the same time he gathered a large amount of lay support in all ranks from the princes of the empire downwards by challenging the whole system by which the States were laid under contribution for the benefit of the papal exchequer.

The Diet of Worms
In 1519 young Charles V became emperor. Towards the end of 1520, Pope Leo issued a Bull condemning Luther. Luther burnt the Bull. A Diet, or assembly of the Imperial Estates, met at Worms. Luther was cited to it under safe con­duct, to be heard in his own defence before the secular arm should enforce the will of the pope. In the face of the whole world Luther proclaimed his uncompromising adherence to the faith that was in him. "Here stand I. God help me. I can no other."

Luther outlawed
The irre­vocable word had sounded at the moment when Christendom was ready to hear. Fearful lest the bold monk should be treated as Huss had been treated a hundred years before, Luther's friends kidnapped him and hid him in the forests of Thuringia. But his work was already more than half accomplished. Although the diet condemned him and he was put to the ban of the empire—in other words outlawed — he carried with him an immense force of public opinion. From that moment Germany was divided into two camps, and the division was soon to spread all over Western Christendom.

Charles himself had declared for the papacy; so also had the King of England, who regarded himself as an expert theologian. But Charles could not afford to develop the policy of the Edict of Worms which had condemned Luther; to do so would have involved Germany m civil war of which his rival Francis would not have hesitated to take advantage.

The religious question was left for the time being to take care of itself. A great revolt of the German peasantry, although vigourously condemned by Luther himself, who was a strong advocate of the civil authority, was inevitably attributed to the spread of the new religious doctrines, in the same sort of fashion as the English peasant revolt had been associated with the teaching of Wiclif.

The revolt had a reactionary effect upon the intellectual reformers in England, very much as the French Revolution exercised a reactionary influence upon English Liberalism at the end of the eighteenth century. But in Germany itself, Luther was in fact so uncompromisingly on the government side that Lutheranism was unshaken. At the diet of the empire held at Speier in 1526 the principle was accepted of leaving the several States to settle their own religious affairs "as each thought it could answer to God and the emperor." The Empire as such was not to take sides.

Charles and the pope were, in fact, just engaging in that quarrel which brought about the sack of Rome by the imperial forces in the following year and practically placed Clement under the control of the emperor.

With the alliance of the papacy thus again secured, Charles reverted to the policy of repressing Lutheranism, and a second Diet at Speier in 1529 again took up the attitude of the Diet of Worms.

The first Protestants
The Lutheran princes entered the Protest, which gave to the Lutheran party the title of Protestant, a name which was at first applied to all who accepted the Lutheran Confession of Augsburg, which was drawn up in the following year; but in common parlance the term was presently extended to cover all those who rejected the Roman obedience, whether they were in agreement with Lutheran doctrines or not. The Protestants at this time felt the attitude of the anti-Lutherans to be so threatening, that they united themselves in the League of Schmalkald. A war of religion seemed on the verge of breaking out, but the aggression of the Turks on the East impressed responsible persons with the necessity for preserving a religious truce.

During the sixteen years which passed before the death of Luther himself, there was no out­break of religious war in Germany. But such a war was always possible, and the possibility was a constant factor in, the politics and diplomacy of the period.

It has to be borne in mind, further, that while Luther was the head and front of the revolt against Rome, that revolt was following a somewhat different course in the schools of theology, whose headquarters were at Zurich and Geneva.

Calvin
The reformers themselves were to be divided into two main camps under the standards of Lutheranism and Calvinism. when the Swiss school was dominated by John Calvin. But as yet divisions had not crystallised. The fundamental fact was that the ultimate seat of authority had been suddenly brought into dispute, while all men seemed to require that some ultimate authority should be established.

The Reformation did not at this stage mean anything like the recognition of the right of private judgement; but it meant that every man sought for the establishment of an authority which would be in agreement with his own private judgement. There was, in short, a common desire for a settlement which would have involved at least a high degree of uniformity The obvious method of achieving a settlement was by means of a General Council of the Church; therefore every one professed to desire the holding of a General Council. But no one was prepared to accept a Council in which views adverse to his own were likely to prevail.

The Council of Trent
Each party and each potentate wanted to secure the predominance for themselves. The ultimate outcome was the Council of Trent, which was opened in 1545 and closed in 1563; but its constitution so absolutely ensured papal predominance that the reformers re­pudiated its authority from the outset, and it was resolved into a council of the papal branch of the Catholic Church, which condemned all who were outside its own pale as schismatics, arrogating to itself alone the title of Catholic.

Catholic versus Protestant
In spite of the fact that other branches of the Church entirely repudiated this papal claim, popular parlance accepted the terminology and treated the terms Papist and Catholic as synonymous. The his­torian is practically reduced to accepting the popular names of Catholic and Protestant; nor is there any reason why they should be regarded as misleading so long as it is clearly understood that they are used merely as party labels without any implication of their theological accuracy.