The Fall of the Duke of Buckingham 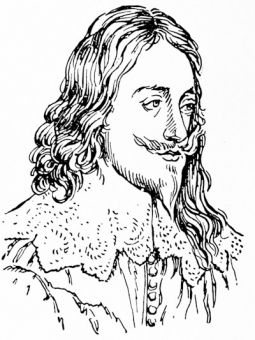 Charles I, from a miniature drawing by Matthew Snelling, 1647

Nor was this [Charles I's refusal to accept the Tonnage and Poundage Bill] the only blow suffered by parliament in the month of June 1628. Both in the first and in this, the third, parliament of the reign, the foremost champion of the Commons and the foremost enemy of Buckingham had been Thomas Wentworth.

A week after the Petition of Right became law, Wentworth's colleagues, comrades, and followers learnt with dismay and alarm that he had been created a baron, which could only mean that he had left the leadership of the Commons to enter the service of the Crown. The moment when he resolved on the momentous change, and his motives for making it, are so obscure that they present an almost insoluble riddle.

The leading champion of popular liberties, the most implacable foe of the Buckingham regime, the man most feared by the court, was suddenly transformed into the most relentless champion of the royal power since Thomas Cromwell, and the most contemptuous of parliamentary rights. And the change took place, not after Buckingham's fall, but at the moment when he was in the zenith of his power.

No explantion at all is even plausible, unless we assume that Wentworth had convinced himself that Buckingham's fall was imminent; for it was equally impossible that he should have hoped to supplant Buckingham in the king's favour by his own influence, or that he should have been prepared to act either as the subordinate or the colleague of the duke; nor is it less impossible that a man of his character could have been bribed by a title to change sides.

He must have reckoned that this combination of arrogance and incompetence in the duke were making his fall daily more inevitable. He must have been confident that he himself would secure the position of the supreme minister.

We may, then, adopt the view of his old comrades and colleagues, that if be had any principles he sank them to gratify personal ambition, seeing himself a mightier man as the king's minister, without a rival among the minions of the Court, than as sharing the leadership of the people with Eliot and Pym.

We may, as an alternative, believe that Wentworth was a patriot who, coming to man's estate in the year of the Addled Parliament, became firmly convinced that the increasing claims of the Crown must be curbed; that he held to that conviction, and strove his hardest for the legitimate authority of parliament until the full claims for liberty were formulated in the Petition of Right.

Just at this stage he realised that a balance of parliamentary and royal powers was un­attainable; that the hot-headed Eliot and the cold-hearted Pym would end by creating a parliamentary tyranny; that the one chance for the country was for a strong man to come to the support of the Crown, to render it absolute, and to provide the brain and hand which, when the Crown was once made absolute, should render despotism beneficent.

There is, in fact, nothing incredible about the development, in a statesman of the first rank, of a change from a democratic to an absolutist attitude, of a gradual sage from one political pole to the Other. The amazing thing about Wentworth is that the change of attitude was made in a week, and the change was to all appearance a total reversal.

But finally, it is conceivable that Wentworth took the same view of the Petition of Right itself as the king, that he never intended a further limitation of the prerogative, and that the attitude of his colleagues on the Tonnage and Poundage Bill not only failed to command his adherence, but drove him into the opposite camp. Whatever explanation we may adopt of Wentworth's conduct, the fact remained that he aroused in his old colleagues an overwhelming intensity of hatred as the supreme traitor and apostate.

"You have left us," said Pym to him — so runs the story — some four months later; "we will never leave you while your head is on your shoulders."

Not perhaps in the fashion that Wentworth had anticipated the blow fell which hurled Buckingham out of his path. A certain John Felton had served as a lieutenant in the Cadiz Expedition. When Buckingham's force went to the Isle of Rhe, he had asked for a captaincy, which the duke scornfully refused him. Thence he had returned to England brooding over his personal wrongs, sick at heart, and savage, like all his comrades, over the sufferings and the disgrace in which the whole force had been involved.

Buckingham's murder
Touched with religious mania, he became possessed with the idea that he was the appointed destroyer of the detested enemy of the people. At Portsmouth he succeeded in making his way into Buckingham's apartments and, as the duke stepped out of his room, stabbed him to the heart. The assassin was seized and hauled away to his doom; he had done his work of deliverance, and it was nothing to him that his own life was forfeit; nay, it was his privilege to have smitten down the tyrant and the oppressor, and for that his own life was a light enough price to pay.

All over England the news of his deed was hailed with an outburst of savage jubilation which was never forgotten or forgiven by the king who had loved his splendid favourite as he never loved another man.