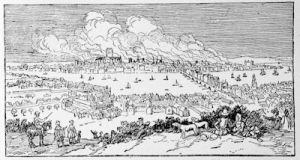 A view of London at the time of the Great Fire, 1666, from a print by Visscher

Meanwhile [following his restoration to the monarchy] Charles was leading the nation upon a course of foreign policy which he himself perfectly understood, though the nation did not Charles wanted the personal friendship and support for himself of his cousin Louis XIV; and Louis had designs not for the formation of a Protestant League, but for establishing a French domination in Europe.

The Hapsburg ascendency was to give place to that of the Bourbon. The price of Cromwell's alliance would have been that policy of toleration, if not of aggressive Protestantism, which had not been unacceptable to France while Oliver ruled in England.

The price of Charles's alliance was not the pursuit of an ideal; it could be calculated in terms of the currency. It was necessary, however, to persuade the people of England to believe that the alliance was in their interest, and to conceal from them the terms upon which it rested. It would not suit Louis to see England closely allied with either Holland or Spain, and, unlike Louis, neither Holland nor Spain would give Charles their alliance on the necessary terms.

The renewal of the Navigation Acts in a still stricter form repelled Holland, while Spain held out for the restitution of Dunkirk and Jamaica. But over and above alliance, Louis wanted from Charles merely the understanding that the king would do his best to reinstate Roman Catholicism, which Charles was quite ready to promise, while he asked in return the money which Louis did not grudge.

Marriage to Catherine of Braganza
Commercial rivalry weighed more than religious sentiment with popular opinion in England, so that it was easy to cultivate hostility towards the Dutch Republic, against which Charles himself bore grudges, not the least being the refusal of the dominant oligarchy to recognise the hereditary title to leadership in Charles's young nephew, William of Orange. All tradition also was opposed to alliance with Spain; and Charles played into the hands of Louis by choosing for his bride a princess of the house of Braganza, a dynasty still insecurely seated on the throne of Portugal, of which Spain claimed the crown.

The Portuguese marriage brought with the dowry of Catherine the possession of Bombay in India, and of Tangier on the coast of Africa and the acquisition of Tangier gave Charles an additional excuse not for restoring Dunkirk to Spain, but for selling it to France. The transaction was unpopular, but it was fully sanctioned by Monk (now Duke of Albemarle) and the military authorities, who saw that its practical value could be maintained only at an intolerable expense, and that in fact Tangier and Dunkirk could not both be effectively occupied.

War with the Dutch
Dutch and English were in a state of perpetual hostility on the high seas The Dutch had planted in North America the colony pf new Amsterdam which formed a wedge between the Northern and Southern English colonies while the English claimed that this territory was already theirs in right of earlier occupation. In the Indian Seas and in the Spice Islands the East India Companies of the two nations were perpetually at odds, and the strained relations, intensified by the Navigation Act, brought about the open declaration of war in 1665.

Naval battles
As in the case of the early war between the Commonwealth and the Dutch this war was signalised by mighty naval battles, in which both sides fought with desperate obstinacy, and hardly inflicted defeats alternated with hardly won victories, which left it almost impossible to say that either of the combatants had the better of the other.

Of these engagements the most famous were the first, a victory of the English led by the king's brother James, Duke of York, off Lowestoft, and the tremendous four days' battle of the Downs in the following year between Ruyter and Van Tromp on one side and Monk and Prince Rupert on the other, in which both sides claimed the victory, though the English losses were far heavier both in ships and in men. Yet six weeks after that great fight the Dutch were fairly defeated in another great battle.

The Great Fire of London
Nevertheless, between wanton wastage and real expenses the cost of the war was enormous. It came at the moment when London was devastated by the Plague, and the Plague was followed in 1666 by the tremendous three days' fire, which made of old London a heap of charred ruins. By way of economising, the authorities elected to lay up a large portion of the fleet, with the result that the triumphant Dutch sailed up the Medway, and the thunder of their guns was heard by the revellers of King Charles's court.

Treaty of Breda
How conscious the Dutch were of the illusory character of their triumph and of the shame they had inflicted upon England was shown by the Treaty of Breda, which was actually in course of negotiation at the time and was ratified a few weeks later. Both sides retained what they had actually won, and New Amsterdam was converted into New York.