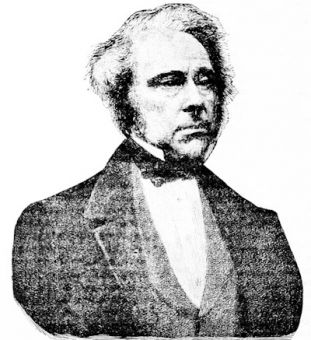 Lord Palmerston, from a photograph

The period of the Derby and Palmerston administrations was one of arrested activities at home. Foreign affairs were of a more exciting order. We had affairs of our own to settle with the Chinese and Japanese, and also in the neighbourhood of the African Gold Coast, all of them involving military or naval operations.

But also we had in Europe the exceedingly difficult task of endeavouring to assert ourselves effectively and at the same time avoiding war; while events in the United States provided an equally difficult problem in another hemisphere.

The war in China
The Chinese trouble had not after all been settled by the Treaty of Tien-tsin since the Chinese government took no steps towards acting upon it. When the French, and English envoys endeavoured, in accordance with the terms of the treaty, to make their way to Pekin, they found the forts on the Piho rebuilt, the obstructions in the river restored, and their own passage refused.

An attempt to carry the forts was repulsed; and the usual necessity in dealing with orientals followed, of dispatching an irresistible joint force of British and French. An ultimatum forwarded to Pekin was rejected. The Piho forts were taken after hard fighting. A conference was arranged to take place near Pekin, but the British officials who were sent forward to' meet the Chinese commissioners were treacherously seized, some of them murdered, and others imprisoned.

Lord Elgin, the British Plenipotentiary, demanded their release within three days as they were not released the army advanced, and seized and sacked the celebrated "summer palace." The Chinese, however, now found resistance useless, the prisoners were released, the allies occupied Pekin, and the Chinese submitted to the terms dictated. The previous treaty was ratified, a large indemnity paid, and the port of Tien-tsin was opened.

Japan
Japan had hitherto cut herself off from the outside world even more completely than China. Until 1858 the Dutch were the only foreigners admitted to trade, and that only under very restricted conditions. At that time, however, Lord Elgin procured a treaty of commerce under which five ports were opened to British subjects, and a British embassy and consular agents were admitted. Four years later a Japanese embassy visited England. But the Japanese were not yet reconciled to the presence of foreigners.

A member of the British embassy at Yokohama was murdered. Compensation was demanded; the compensation was promised but not paid, and the ports were closed. The British admiral in those seas seized some Japanese ships at Kagosima. The batteries on the shore opened fire on the squadron, and the squadron bombarded Kagosima. Thereupon the Japanese gave way, and the ports were again opened.

The Ashanti Expedition
The African affair referred to was an expedition from the Gold Coast against Ashanti, a somewhat futile demonstration against a savage native potentate who had been harrying friendly tribes. Such expeditions in peculiarly unhealthy regions are inevitably costly both in lives and in money, and, necessary though they are, always appear to be unproductive. The Ashanti expedition of 1864 was no exception to the general rule.

Italy
Meanwhile Europe and America kept Lord John Russell at the Foreign Office very fully occupied, and it is possible that, but for the restraining influence of the Queen and of the Prince Consort while he lived, the self-assertiveness of Russell and Palmerston might have involved the country in war. Grave European complications arose at the beginning of 1859 in Italy.

The hopes of Italian nationalism centred in Victor Emmanuel, the King of Sardinia, and the first condition for Italian nationalism was the ending of the Austrian supremacy in North Italy. Victor Emmanuel's great minister, Cavour, secured the alliance of the French Emperor, and, after the failure of attempts to procure a European conference, a campaign was opened in Northern Italy in which the arms of the allies were successful. Napoleon, however, was playing for his own hand and stopped short of driving the Austrian out of the Peninsula.

A temporary arrangement was arrived at, at the Treaty of Villafranca, by which Austria gave up Lombard to Sardinia, Sardinia gave up Nice to France, and the former ducal dynasties were to be restored in the Italian duchies. But the duchies entirely declined, to accept the arrangement and were solidly determined to annex, themselves, to Sardinia.

The British Government had refused to intervene, while dis­playing the strongest sympathy with the Italian movement, and by its attitude it probably prevented Prussia from lending aid to Austria. Now its attitude was again the decisive factor in the situation. British influence was exerted to the utmost to prevent any interference with the duchies, in deciding their own fate.

Garibaldi
Austria accepted the situation, and those of the duchies which desired it - which meant every one of them - were permitted to annex themselves to the kingdom of Northern Italy. France; however demanded the cession to herself of Savoy, which Savoy itself favoured. But the whole performance fomented British distrust of Napoleon, whose selfish designs had been made unmistakably clear.

Ostensibly the two Powers had been working together; but in fact the action of the British had thwarted the Emperor's real intentions. The sudden insurrection of Sicily led by the warrior-hero of Italian liberty, Garibaldi, the overthrow of the Bourbon dynasty of Naples, the skilfully audacious management of the situation by Cavour, and the voluntary annexation of the Southern state to Sardinia made Victor Emmanuel King of Italy, with the exception of Rome, which was still held by the Pope under French protection, and of Venetia, which was still an Austrian province.

In these developments the attitude of the British Government once more went far towards preventing active intervention by any other of the Powers.

Schleswig-Holstein
Very much less satisfactory, on the other hand, was the line taken bv the Foreign Secretary, now raised to the peerage as Earl Russell, in connection with other European complications. The exceedingly intricate question of the sovereignty of Schleswig-Holstein, provinces attached to the kingdom of Denmark, became acute.

Very few people indeed understood them, but to the British public it seemed that Prussia and Austria were combining to rob the little state of Denmark. It appeared that the Powers had guaranteed the integrity of Denmark, and popular sentiment was greatly excited. Russell remonstrated in a manner which was absurd, unless it was intended to back the remonstrance by force of arms, a course which the country would probably have endorsed.

Already Russell had followed a similar line in addressing bellicose remonstrances to Russia on her treatment of an insurrection in Poland, when he had also induced Napoleon to remonstrate; but he had then permitted both the Tsar and the French Emperor to see that the remonstrance would not be backed by force. Both the Western Powers were snubbed for their pains.

Now, therefore, when Russell invited Napoleon to join in bringing diplomatic pressure to bear upon Austria and Prussia on behalf of Denmark, the Emperor declined to subject himself to the risk of another affront, and for the second time Britain was placed in an ignominious position in the eyes of Europe.

British prestige suffered severely, not from British non­intervention, but because non-intervention had been preceded by threatening language to which the minister who used it had never been prepared to give actual effect.