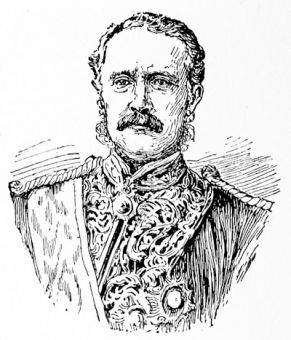 General Gordon, from a photograph

At home Ireland continued to be disturbed, and in England a good deal of alarm was created by sundry ineffective dynamite outrages originating with the extremists among the Irish in America. But there was little opportunity for legislation until, in 1884, a bill was introduced for completing the democratic system by extending the franchise to the agricultural labourer who had still been excluded by the Reform Bill of 1867.

The Franchise Bill was carried in the House of Commons; the House of Lords, under Salisbury's leadership, passed a resolution that it should not become law except as a part of a complete scheme. This attitude was taken as implying an attempt to compel the Government to dissolve, and Liberals angrily denounced the claim of the peers to force a dissolution. The bill was withdrawn with the announcement that it would be reintroduced in an autumn session.

There was every prospect of a fierce struggle between the Houses. The Government had been losing credit with the country; but a fiery campaign in the summer appeared to revive Liberal enthusiasm, and the "mending or ending" of the House of Lords seemed likely to become a plank of the Liberal platform.

The Redistribution Bill
Yet the strong element of Conservatism in Gladstone himself, as well as in the Whig wing of the party, made him anxious to avoid a constitutional crisis of such gravity, while the more cautious among the peers viewed the results of such a struggle with grave apprehension.

A compromise was arrived at between the leaders; when the autumn session was opened, the bill went through the Commons, and it was then announced that if it were passed the Redistribution Bill should be brought in forthwith, and that in effect the second bill should not be made a party measure but should be shaped so far as possible in conformity with Conservative as well as Liberal opinion.

The second bill was then brought in, the Lords passed the Franchise Bill, and the Redistribution Bill went through both Houses with the minimum of controversy. The fundamental principles of the measure were the disfranchisement of boroughs with a population of less than 15,000, and the return of one member only by every constituency with only a very few exceptions.

Afghanistan (again)
The Liberals had gained something by the vigorous campaign of the summer; but this was more than compensated by the fall of Khartum; and the Penjdeh incident in Afghanistan in March 1885 probably weakened the Government again. There was a collision between Russian and Afghan troops on the border of Afghanistan, unmistakably due to the aggressive action of the Turcoman commander Ali Khan, whose name has been conveniently Russianised as Alikanoff.

For a moment it appeared that there would be war between the Amir and the Tsar, and that the British would be bound to support the Amir in the most thorough-going fashion. Fortunately Abdur Rhaman, with a singular shrewdness, refused to make much of the incident which was judiciously smoothed over; and the process of delimiting the several frontiers, which had given occasion to it, was con­tinued without further serious friction.

At the same time there was a certain feeling, born of the general suspicion of timidity attaching to the Gladstone Government, that sufficient vigour and firmness had not been displayed; though on the merits of the particular case there was hardly sufficient warrant for that view.

Gladstone Resigns
The weakened Government was defeated on the Budget. Gladstone resigned, and Lord Salisbury took office. Divergencies in the ministry as to the treatment of Ireland had contributed to its fall. But the Conservatives, in an actual minority, were not inclined to throw down a direct challenge to the Irish members.

They did not find it necessary to renew the Crimes Act, and they brought in a generous measure, known as Lord Ashbourne's Act, for the provision of public funds to facilitate the purchase of their holdings by the Irish tenantry. Coming from the Conservative Government the measure received no active opposition. In the circumstances however a dissolution was inevitable, and the results of the general election in August were unexpected.

Election Results
Gladstone had rejected certain overtures from Parnell, declaring that a definite Irish policy could not be laid down until Irish opinion had been clearly expressed by the now enlarged electorate. The answer as far as Ireland was concerned was emphatic. No Liberals were returned for that country, but there were eighty-five Home Rulers. The Liberals in the House of Commons numbered precisely one-half of that assembly, and it was obvious that the Parnellites were in a position to paralyse any government whatever.

Lord Salisbury had no disposition to attempt carrying on government by Parnellite aid. When parliament met in January 1886, it was announced that a new Coercion Bill would be brought in. Ministers were defeated on an amendment to the address, Lord Salisbury resigned, and the queen sent once more for Gladstone.