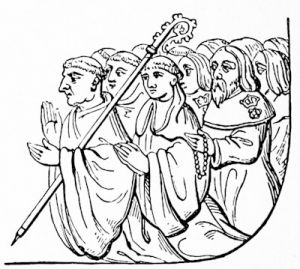 Bedesmen in the time of Henry VII

When Henry VII possessed himself of the Crown of England, the future before him was anything but promising. He was king, but on all sides there were possible claimants who could show a better title by descent man his own. For half a century the country had been ridden by factions, torn by dissensions. Its arms had ceased to inspire fear; on the Continent, since Bedford's death, it had been held of little account; even Edward IV had satisfied Louis XI that nothing serious was to be feared from England. At home there was hardly a recognised seat of political authority.

The Crown was discredited by the imbecility of its wearer even before king-making came into fashion. The parliament had been allowed to assume an authority which it had railed to convert into an efficient control. The old baronage had been wiped out and replaced by a new baronage which lacked both power and prestige.

The treasury was empty though the country was not poor. But there were three fundamental principles which provided a basis for political reconstruction, principles which had become thoroughly rooted, which no government could ignore without bringing destruction upon itself. Justice must be administered according to the law; legislation was invalid without consent of parliament; taxation could be imposed only with the consent of the people's representatives.

For the restoration of international prestige Henry adopted the methods not of Edward III or of Henry V but of a new diplomacy; till each of the European Powers was forced to recognise that the goodwill of England could not be neglected. We have now to see how he dealt with the great domestic problem.

A system of fines
It was essential that the nominal authority and the actual power should be concentrated in the same hands; that both should be wielded by the Crown. Yet the dynasty existed on sufferance. It could not be maintained in the face of popular antagonism or by sheer terrorism, yet it would survive merely as a pageant, if the Crown were at the mercy of popular caprice. Hence it was imperative that the Crown should at once conciliate popular favour, secure a full treasury, and paralyse antagonistic forces. This complex process demanded exceedingly deft manipulation.

The treasury must be filled, but not by excessive demands on the purses of the commons. The nobility must not be allowed to become dangerous. The Crown must shun all appearance of tyranny. The king then must display himself as above all things a law-abiding man claiming no questionable rights. Henry began his career by being ostentatiously deferential to parliament. Richard had held only one, and Edward for a dozen years had ruled practically without a parliament. Henry during the first half of his reign summoned parliaments repeatedly, took them into his confidence, made them partner of his actions.

There were no arbitrary trials and executions; parliament passed the Acts of attainder. The king's business was only to exercise the royal clemency judiciously. The king did not ask parliament for excessive grants. The national honour demanded war with France, and the nation would do its duty in providing necessary funds. The nation did. A judicious economy made a sufficient show without spending the money. A judicious diplomacy did what the advocates of a scientific tariff seek to do to-day—it made the foreigner pay. By wars and rumours of wars Henry filled his coffers instead of emptying them.

The very uncertainty of the Tudor tenure of the crown was made productive. Every revolt and. every plot provided its crop of attainders; but a clement monarch indulged in no vindictive bloodshed; treason was for the most part sufficiently punished by the confiscation of lands and wealth. The royal revenues expanded, and possible enemies were deprived of the sinews of war.

Justice was satisfied and no one could hint at tyranny, while the commons, untouched, had no cause of complaint. Again Henry found another source of revenue. For the good of the State and the repression of turbulence, sundry enactments had forbidden, with very little success, the practices called Maintenance and Livery, by which great magnates supported large numbers of retainers. The statutes were enforced and the breaches of them penalised by heavy fines. Thus was turbulence of every kind turned to account by the royal treasury.

Court of Star Chamber
The royal justice had failed in the past because the power of local magnates had enabled them to set at naught the ordinary ministers of the law, to the detriment not only of the government, but of justice in general. In fact the local magnates dominated the local courts. Henry found a new way of dealing with them by procuring statutory confirmation of powers occasionally exerted in the past by committees of the Privy Council.

Thus a permanent judicial committee was established, bearing the name of the Court of Star Chamber, with powers conveyed to it by Act of Parliament, which court could deal arbitrarily with those offenders who had no fear of the ordinary law or who perverted the administration of the law.

The court was debarred from inflicting the death penalty, but its normal process was punishment by fines. Here again there was no tyranny; on the contrary the Crown, so far as forms went, had merely obtained parliamentary sanction for what had previously been done, though only occasionally, without parliamentary sanction at all. The hand of the law was very much strengthened and the royal coffers were legitimately filled.

Lastly, the king resorted freely to benevolences, for once disregarding the letter of a statute of Richard III. But there was no compulsion. The king presented to his victims two dilemmas; the first, "If you can afford to aid your sovereign when he is in need of money, you can bear him but little goodwill if you refuse it to him"; the second, traditionally known as Morton's Fork — a libel on the Archbishop, who was not responsible for it "You live handsomely, therefore you can afford to help the king out of your abundance; or else, you live sparingly, therefore you have wealth laid by and can afford to help the king out of your savings."

But these dubious methods of raising money were during the earlier part of Henry's reign applied not to the commons but to the nobles. It was only in the later years, when the king's position was already secured, that the machinery of extortion was brought to bear upon the commons.

In the later years of Henry's reign, parliaments were as rare as they had at first been frequent, because the king had accumulated such a mass of treasure that he had no need to appeal to his subjects for assistance. He left to his son a full treasury, an indisputable title to the throne, and experienced officials who thoroughly understood their business, but had neither the will nor the power to control the Crown.

His chosen agents had always been ecclesi­astics, or, if laymen, not lords but commoners. His policy had finally destroyed the once dangerously excessive accumulation of power and' wealth in the hands of a few great families; the vast estates were dispersed, while the gentry of moderate estate had been multiplied; and at the same time the burgess class had been carefully fostered and their wealth also increased.

Both these classes had everything to gain by the maintenance of peace, order, and law; which it was no less in the in­terests of the Crown to preserve. To the gentry and to the burgesses, arbitrary treatment of the magnates. was rather welcome than otherwise so long as they were not themselves victimised; and thus the Crown was established in a position of greater power, provided that power were judiciously exercised, than it had known since the days of Edward I.