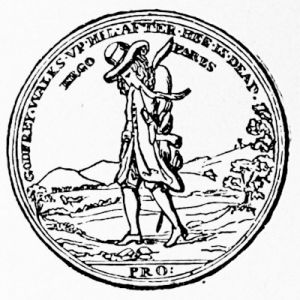 Contemporary medal of the Godfrey murder

The attack on James's succession [during the Popish Plot uproar] had failed, and Danby was not even shaken; but at this stage the vindictiveness of the French king came into play.

Danby impeached
Danby's letter, before referred to, was produced and read in the House of Commons. The secret bargaining with France was revealed. It was of no avail that the letter had been written by the king's order, as attested by his own hand-writing. The doctrine of ministerial responsibility was definitely laid down. The king could do no wrong, but the minister, who did wrong in his name could not shelter himself from punishment behind the king's authority. Danby was impeached.

For eighteen years the king had abstained from dissolving the Cavalier Parliament, although it had never been subservient to the royal authority, and had been increasingly insistent on its own; Charles had always been shrewd enough to perceive that a new parliament would probably be more, not less, hostile. But the only chance of saving Danby now was that a new parliament might after all be more amenable. The Cavalier parliament was dissolved.

The new parliament was not more amenable. Shaftesbury had a large majority in the Commons, and Danby was again impeached. Thereupon he produced a royal pardon which stayed the proceedings; but the threat of a Bill of Attainder drove Charles to dismiss him from office, and to lodge him in the Tower lest worse should befall.

At the suggestion of Sir William Temple an academic device was adopted to avoid a deadlock. The king dismissed the whole of his Privy Council and appointed a new Council of thirty members, fifteen being officers of State, while the other fifteen were non-official. A preponderance was given to Shaftesbury and his follower but for practical purposes the new scheme was still-born.

The Habeas Corpus Act
The king still ruled through ministers of his own selection. On the other hand, a new Exclusion Bill was introduced and passed by the House of Commons; James was declared incapable of succeeding to the Crown, which, in the event of the king dying without male issue, was to pass to the nearest Protestant heir. Charles was determined not to allow the exclusion of his brother, and he prorogued the parliament, but not till it had passed, almost if not quite by accident, the Habeas Corpus Act.

In principle there was nothing new in the measure, Theoretically an accused person could procure a writ of Habeas Corpus which required that he be either brought up for trial or set at liberty. But the lawyers had discovered devices enough by which the issuing of the writs could be deferred almost indefinitely. The new Act required that trial or release should take place within a definite time after application for the writ.

There is good reason for believing Burnet's story that the majority of nine which passed the bill in the House of Lords was really a minority, the tellers by way of a jest having counted one particularly fat lord as ten.