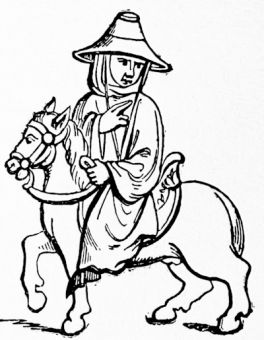 Henry Duke of Lancaster was in plain terms a usurper who seized the Crown by violence and secured it, so far as it was secured, by a parliamentary title. The lawful king was deposed and the nearest lawful heir was passed over. No one believed the fiction concerning Edmund Crouchback; a name which in fact merely meant that that prince had worn the Cross of the Crusaders on his back, not that he was deformed.

If, therefore, Henry's title was valid at all, it was on the ancient principle that the Great Council of the realm was entitled to fix the succession, though precisely two hundred years had passed since it had exercised that power by preferring John to his elder brother's son. The power of deposition was also implied in the circumstances.

"Uneasy lies the head that wears a crown" - the more so when the Crown has been usurped. Henry owed his victory very largely to the Earls of Northumberland and Westmorland, a Percy and a Neville, with the Arundels and the Staffords; the last family representing the house of Thomas of Gloucester. For the moment all these were loyal to the king they had set up.

But within a few weeks Richard's closest supporters were conspiring for his restoration—the Hollands, stepsons of the Black Prince, who held the earldoms of Kent and of Huntingdon, Salisbury and others. The plot was betrayed by their half-hearted confederate, Edward Earl of Rutland, son of the Duke of York. The conspirators were captured and beheaded.

Richard II's death
But in the meantime Richard himself was dead; there is no real doubt that he had in fact been murdered; and his body was now exposed to public view in order to demonstrate his decease. The fact did not prevent a fictitious Richard from appearing later as a pretender; since a report was put about that the corpse exposed had been that of a chaplain of the former king, to whom he had borne an extraordinary personal resemblance.

Owain Glendower
Next came a rising of the Welsh, with whom Richard had been popular. They were led by Owen Glendower, a gentleman of the house of Llewelyn, who proclaimed himself Prince of North Wales and the loyal vassal of King Richard, whose death he denied. His sway was recognised over the greater part of the principality, and Henry never succeeded in putting him down thoroughly.

Homildon Hill
France and Scotland were astir again, the French court having for excuse the fact that Richard, shortly before his fall, had married a French princess. The Scots gathered a great force, led by Murdach of Albany; King Robert's nephew. At Homildon Hill they were utterly routed in much the same fashion as at Halidon Hill some seventy years before; Murdach of Albany, Douglas, and two other earls were taken prisoner by the Percies.

Henry was badly in want of money, and desperately anxious to avoid irritating parliament by asking for it. The Percies were presuming on the help they had given him, and their achievement at Homildon Hill was by no means to the king's liking. He required them to hand over their Scottish prisoners, and claimed the ransoms for himself.

Hotspur's Rebellion
The Percies took the act as a warning or a challenge, released Douglas unransomed, and entered upon a bond with him and Glendower to over­turn Henry, and make young Edmund Mortimer king, if Richard was really dead. Hotspur's wife was herself a Mortimer. Thomas Percy, Earl of Worcester, joined with his kinsmen of Northumberland. Hotspur and Douglas marched to join forces with Glendower; but Henry caught the northern force at Shrewsbury before the junction could be effected; and an extremely, sanguinary battle ended with a decisive victory for the king.

Hotspur was slain on the field, Douglas was for the second time made captive, and Worcester also was taken and executed. Young Prince Henry of Wales, a boy of fifteen, here saw his first stricken field. Shakespeare treated the episode as a dramatist, not as a historian. Hotspur did not fall in single combat with Prince Hal; a stray arrow killed him.

The Earl of Northumberland had not marched with Hotspur; he succeeded in making his peace with the king by payment of a heavy fine. But he was still meditating revenge, and in 1405, two years after Shrews­bury, he worked up afresh rebellion with the aid of the Earl of Nottingham, the son of Henry's old colleague and opponent Thomas Mowbray of Norfolk, and the Archbishop of York, whose cousin, the Earl of Wiltshire, Henry had executed as one of Richard's "evil counsellors." By fair words and promises, however, the rebels were persuaded to disband their forces; whereupon they were arrested and executed. Northumberland himself effected his escape, but only to fall two years later at Bramham Moor in a third attempt at insurrection.

The danger which had threatened from France soon came to an end, since that country fell into a miserable state of anarchy and internal discord under the nominal rule of a king who was generally quite insane and at his best was an imbecile. The Orleanist and Burgundian branches of the royal family intrigued and fought for supremacy with every circumstance of treachery and violence. Scotland was paralysed for action by an accident. The old king sent off the Crown Prince James to be educated in France, fearing, perhaps, that he would meet with the same fate as Rothesay at the hands of his ambitious uncle of Albany.

James of Scotland captured
The boy did not reach France, as the ship in which he sailed was captured by the English; and young James was detained, and held for eighteen years as a hostage for Scotland's good behaviour. The unexpected blow killed old King Robert; Albany as a matter of course became regent, and Albany did not in the least wish to see his nephew at liberty.

After the crushing of two rebellions there was no great danger that a third would be successful; and after Bramham Moor the persistent defiance of Glendower in Wales remained the only constant source whence danger might suddenly spring. There were no more active insurrections. Edmund Mortimer was in the king's hands, so that a revolt in the boy's favour was out of the question.

Suppressing Lollardry
Throughout the first year of his reign it was of vital importance to Henry to secure both clerical and popular support. We have remarked on the increase of anti-clericalism and the spread of Lollardry during Richard's reign; and it might at first sight appear that clerical and popular favour could hardly be associated.

De Heretico Comburendo
But the popular Lollardry did not concern itself with theology. The followers of Wiclif might be attacked for their heresies without offending popular feeling, and with the entire approval of the clergy. Hence the second year of Henry's reign saw the passing of the Act De Heretico Comburendo, by which for the first time death at the stake was introduced as the punishment for heresy. Even while the Act was being passed its first victim, William Sawtre, was martyred.

Archbishop Arundel, the prime mover, was constant in urging that in fact Lollardry was an offence not merely against the Church but against society, that it was not merely heresy but anarchism. It was only twenty years since the Peasant Revolt, and the propertied classes felt the force of the appeal. The persecution of heresy did not as yet become systematic; it aroused no antagonism; it satisfied the clergy that Henry was a loyal son of the Church; but it did not mean that the clergy had become popular.

The orthodox Commons, who were quite ready to burn their neighbours for unorthodox views on abstract questions, did not in conse­quence relax the austerity of their opinions as to clerical worldliness, or their conviction that the Church was disproportionately endowed with this world's goods. Twice during the reign proposals were brought forward by the Commons for wholesale confiscations of ecclesiastical property, though their petitions were rejected.

The Commons, in fact, took very good care to make the king feel his dependence upon them. They grumbled over every appeal for financial aid, while the interminable operations against Glendower in Wales were a dual drain upon the Treasury. Henry was obliged at their instance to submit to the appointment of a Council, which at least seriously curtailed his freedom of action.

They insisted successfully on their right to examine the account of the expenditure of their grants. They insisted, foo, on their exclusive right to originate money grants, when the king had ventured to name the amount of the tax which he thought advisable. The Commons, in fact, during the reign of Henry IV claimed and exercised an unprece­dented amount of control, which the weakness of the king's title compelled him to concede.

In the latter years of the reign, the Prince of Wales took an exceedingly active part in politics; and it was certainly due to his personal energy that the irrepressible Glendower was held in check, and reduced from, the position of an almost in­dependent prince to that of a troublesome outlaw. The legends of the doings of the wild Prince Hal immortalised by Shakespeare are not to be simply set on one side.

Contemporary chroniclers are quite definite in declaring that his character changed when he came to the throne, that his accession was viewed with some anxiety, and that he was given to a wildness which contrasted with the personal austerity of his later life. The legend of his behaviour to Judge Gascoigne is almost certainly a fiction, based upon an actual incident in the life of Edward II. But such legends, however inaccurate in detail, can only be accounted for because they were appropriate to the character popularly attributed to the Prince; and such popular estimates are apt to be funda­mentally sound.

Still it is absolutely clear that the Prince indulged himself only in the intervals of strenuous and responsible work; that he was not a wildly irresponsible boy who merely showed himself capable of better things on an occasional emergency. Henry V had many of the qualities of a Puritan fanatic, which are by no means inconsistent with a degree of youthful dissipation; and to Henry, as to many a Puritan, came a moment which marked a decisive change in the manner of his life; the moment when his father died worn out by disease, and he himself became King of England at the age of five and twenty.