Scotland in the 14th Century 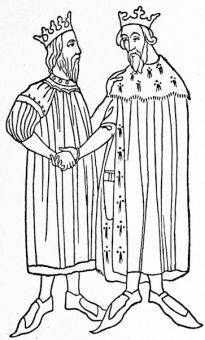 Edward III and David of Scotland, from, the Articles of the Peace of 1357

The period of David Bruce's minority in Scotland was mainly occupied with Edward Balliol's attempt to supplant the Bruce dynasty by the help of the King of England, and on terms of subjection to the sovereignty of England. The great King Robert had effected the task of liberation, and the people of Scotland were resolved that, whatever it cost them, they would not submit to a foreign yoke.

After Randolph's death no statesman and no soldier appeared capable of organising the government or of repeating the military triumphs of Bruce and his captains. When Scottish and English armies met in the field, the Scots leaders invariably failed to apply the lessons of Bannockburn; and the Scots people would not learn the use of the bow.

The victory was always won by the English archers. But if they were beaten in the field, the Scots still carried on the stubborn guerilla warfare at which they had become adepts; and the moment that active English aid was withdrawn from Balliol he was again driven out of the country.

Robert the Steward
Five years after his return to Scotland, David Bruce as the ally of France invaded the north of England, whereupon his army was routed and he himself was taken prisoner, at the battle of Neville's Cross. For eleven years he remained a captive in England. During that time the government of Scotland was in the hands of his nephew, Robert Fitzalan the Steward, the son of his elder sister Marjory Bruce, and heir to the throne if David should predecease him without leaving offspring.

Robert was not a strong ruler, and was powerless to check the dangers of that development of feudalism in Scotland which defied all efforts to establish a strong central government. The nobles were individually too powerful and too jealous of each other to devote themselves to national interests; there were always some among them ready to enter into a "band" against any government in which they were not themselves predominant; ready even to intrigue with England for their own ends.

There were always others who were ready to reconcile private enmities in the face of an English attack — but for no other reason. But below the ranks of the nobility, the Scottish people, the most independent in the world, were absolutely resolved to fight to the last gasp against English dominion. And it was to this fact that Scotland owed the preservation of her independence.

The Burnt Candlemas
While the truce lasted between England and France there was truce also between England and Scotland. In 1354 terms were also arrived at for the liberation of King David. But in the next year the French war broke out again, the Scots attacked Berwick, and in 1356 the King of England took his revenge in the Burnt Candlemas. This was at last followed by a treaty which set David free but bound Scotland to pay a ransom of a hundred thousand marks.

Tremendous as was the taxation involved for a country so poor as Scotland, David nevertheless made matters worse by indulging himself in the most extravagant expenditure, The king even went so far as to propose the purchase of the remission of the ransom by recognising as his heir Lionel of Clarence, the second son of the King of England, in place of Robert the Steward or Stewart; but the proposal was received by the Estates with a flat refusal which demonstrated once for all the intensity of the national feeling on the subject.

Lords of the Articles
The pressure of taxation, and the king's need of money, gave to the Scottish Estates new powers of control, as with the English parliament. The Scots parliament, however, was not organised like that of England, and tended to delegate its powers to committees which for practical purposes replaced the assemblies of the Estates; and thus the political functions of parliament came gradually to be exercised by a standing committee known as the Lords of the Articles.

In 1371 David died without legitimate offspring, and was succeeded by Robert II., the first of the Stewart line. Robert's father was Walter Fitzalan, the husband of the great King Robert's daughter Marjory, and hereditary High Steward of the kingdom; of Norman lineage, connected with the English house of Arundel. For twelve years there was nominally truce with England; but both at sea and on the borders almost perpetual warfare prevailed in practice, which was officially condemned but was allowed to take its course by both governments.

It was with a view to terminating this unsatisfactory state of things that John of Gaunt had gone to Scotland when the Peasant Revolt broke out in England. Robert himself was anxious to preserve peace, but was unable to restrain the nobles. Raids and counter raids in 1384 and 1385 were followed by Richard's invasion in company with Lancaster; when the Scots lords left the English to follow their own devices, but themselves carried out a very effective counter raid in Cumberland and Westmorland.

Otterburn
In the following year the Scots were the aggressors, and the campaign culminated in the famous moonlight fight of Otterburn, celebrated without much regard to strict historical accuracy in the ballads of Otterburn and Chevy Chace. The victory lay with the Scots, who carried off among their prisoners Harry Hotspur, the son of the Earl of Northumberland, though their own leader,-James Douglas, was slain on the field. Soon after this there was a new treaty of peace, which was not preserved immaculately but terminated open hostilities on a large scale.

In 1390 the old king died, and was succeeded by his eldest son John, who took the name of Robert III to avert the ill-luck associated with the names of the three kings who bore the name of John in England, France, and Scotland.

To his melancholy reign belong the events celebrated in Sir Walter Scott's Fair Maid of Perth, the battle on the North Inch between the clans Chattan and Kay, and the death of the king's eldest son, David Duke of Rothesay, who was popularly believed to have been starved to death by his uncle, the king's brother, Robert Duke of Albany.

This event took place in 1402, shortly after the accession of Henry IV in England, and made the king's second son, the child James, heir to the throne of Scotland.