Ireland under Elizabeth I 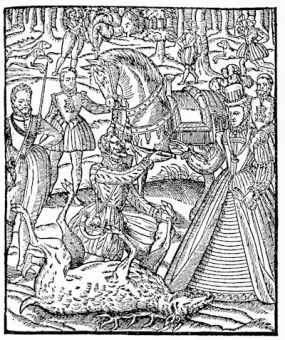 The rule of St. Leger in Ireland had pointed not very conclusively to the possibility that combined firmness and tact might introduce into the country some conception of law and order as ends which it might be generally profitable to pursue. St Leger had been superseded by Bellingham, who had taught the Irish chiefs that lawlessness and disorder might entail very unpleasant consequences, under a stern English governor with an adequate force at his disposal.

But he had also inspired the Irish with a fervent dislike to any kind of English government which did not allow them to go their own way. If they had had any capacity for combination, Bellingham's disappearance would probably have been the signal for a concerted uprising with which the governments of Edward VI and Mary would have been quite unable to deal. But they preferred relapsing into general disorder, and English rule was again hardly felt outside the Pale except in the south, where, perhaps owing to jealousy of the Geraldines, the Butlers were consistently loyal to England.

Shane O'Neill
Now, while Mary was still reigning in England, there arose in Ulster a leader who presently caused serious trouble to Elizabeth. This was Shane O'Neill, who was the legitimate heir of the Earl of Tyrone, although the peculiarities of Irish custom allowed the recognition in his place of a younger and illegitimate brother.

Matters were simplified when the brother was killed, leaving a youthful heir. Shane, in accordance with another Irish custom, got himself elected as "the O'Neill," chief of the traditionally dominant clan of Ulster. In this capacity he rapidly made his power felt, and became practically master of the north of Ireland, where he exacted an obedience to his rule not less effective than that exercised by the English government within the Pale.

There the English Deputy, the Earl of Sussex, was forced to rely upon his English soldiery, who were generally speaking the worst kind of riff-raff; whose perpetual misconduct persistently destroyed the moral effects which ought to have followed upon the enforcement of authority. Shane's independence caused the Deputy to attack him in arms, with the result that his expedition narrowly escaped being cut to pieces.

Elizabeth made up her mind that Shane was a fitter subject for conciliation than for coercion. He was summoned to England, whither he came under a safe conduct, and where he studied English ways with Lord Robert Dudley, the future Earl of Leicester, as his tutor. But during his absence, wild disorder raged in Ulster.

Elizabeth was obliged to recognise that he was the one man who could rule Ulster, and to let him return with very large authority sanctioned by the queen. For the next three years O'Neill was consolidating his rule. Elizabeth's ministers, with benevolent intent, devised the scheme of dividing Ireland into four presidencies or provinces.

Ireland divided
One was to be the Pale, that is Leinster; O'Neill was to be president in Ulster, a Geraldine in Munster, and a Burke or an O'Brien in Connaught. This system in the two latter provinces only opened the way to violent tribal feuds; while O'Neill continued to prove himself the one strong man, though his methods were rather those of an oriental potentate than of a western ruler.

In 1566 Sir Henry Sidney came to Ireland as Deputy, and Shane found an antagonist who taxed his abilities to the utmost. Sidney promptly informed Elizabeth that, if English government was to prevail in Ireland, O'Neill must be suppressed, to which end he must have the necessary forces. With extreme difficulty the supplies were extorted from the reluctant queen.

Sidney's diplomacy dissuaded Desmond from joining O'Neill; Sidney himself marched into Ulster; the O'Donnell of Tyrconnel, who had an old complaint against O'Neill, rose to take vengeance. O'Neill had to fly and take refuge among his very dubious friends, the Scottish colony of Antrim, and there he lost his life in a brawl.

So fell the first Irish chief who may be suspected of having formed the deliberate design of throwing off the English yoke; for such a description would hardly apply to the men who had supported the adventure of Edward Bruce two and a half centuries before. And Shane had set the ominous example of opening correspondence with foreign Powers on the basis of national Irish loyalty to the Roman religion. With O'Neill's fall Elizabeth's government began trying to enforce the Act of Uniformity out­side the Pale; and from that time forward the religious grievance took its place beside the national grievance against English domination.

In the years that followed both these grievances were greatly embittered, and a third, thenceforth of vital importance, began to assume an acute form. Over the greater part of Ireland the relations between the occupiers and the owners of the soil were fixed in fact, not by English law, but by the Celtic tribal traditions of centuries.

The customs according to English ideas were bad; but bad or good, the Irish people were passionately attached to them. The Englishman likes to believe that political institutions are a matter of common sense in which there is no room for sentiment. When sentiment gets the better of him, he persuades himself that it is not sentiment indifferent to any threats from any foreign Power, knowing that whatever they might threaten, they were impotent to take effective action against her.

England was playing no heroic part; she rejected the role of the champion of Liberty, civil or religious. She would embark on no great adventure.