The Growth of English Sea Power under Elizabeth I 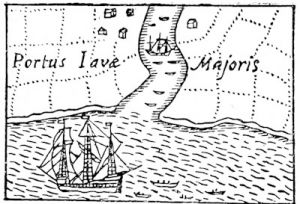 Drake's ship, the Golden Hind, at Java, from the Chart of Drake's voyages

The second half of [Elizabeth I's] reign was to see [England] challenging and breaking the might of the greatest Power in Europe, and asserting for herself an unqualified supremacy by sea. It was to see her also step into the front rank among the peoples who have given to the world great poets and great thinkers. Already, however, in 1579, while as yet scarcely a hint had appeared of the literary splendours which were so soon to burst forth, the English seamen knew that when the hour of conflict should arrive, their own supremacy was assured.

In the narrow seas English sailors had always held their own since the days when Hubert de Burgh dispersed a French Armada off Dover. The two great Edwards and Henry V had been alive to the uses of fighting fleets, which English statesmen occasionally endeavoured to foster, with no very marked success, by Navigation Acts.

But, until the sixteenth century, the recognised maritime Powers were the dwellers on the Mediterranean, and the Portuguese. The reign of Henry VIII, however, saw signs of the coming maritime expansion. The creation of a royal navy was that monarch's pet hobby; it was the one useful object on which he expended a portion of the spoils of the monasteries. He was the first king who really owned a considerable navy of fighting ships, although in the ten years after his death its strength in numbers and in tonnage was reduced to about one half.

But, in fact, England was awakening to a consciousness of her maritime destiny. English sailors were making adventurous expeditions, intent on exploration or on commerce; even the reign of Edward VI witnessed the departure of the expedition of Willoughby and Chancellor in search of a north-east passage to the Indies — an expedition which resulted in the "discovery of Muscovy," the opening of direct communications with Russia.

But by the time of Elizabeth's accession they were already turning envious eyes to the realms of fabulous wealth where the Spaniard had established his dominion. Apart from that shoulder of South America which the Pope had inadvertently bestowed upon Portugal, the whole of that continent, as well as North America up to Florida, was regarded by the King of Spain as his private estate, in which a strict trading monopoly was preserved.

That trading monopoly was resented by the English, who claimed that it was in contravention of past treaties. Moreover, it was inconvenient to the Spaniards themselves, to whom English sailors brought goods which they were prohibited from buying, but were quite ready to buy on some show of compulsion.

Hawkins the slave-trader
John Hawkins, to his profit, broke through the official barriers with a cargo of negro slaves, purchased from native chiefs on the African coast. The negro was a much more efficient labourer than the so-called "Indian" of America, and John Hawkins repeated the experiment. His first venture had displeased the King of Spain, and the official barriers were less easily penetrated the second time. But they yielded to a formal display of force. Hawkins sold his slaves and returned to England a wealthy man, but under official Spanish condemnation as a pirate.

Drake and Hawkins
He sailed a third time, and with him his young cousin Francis Drake. His previous experiences were repeated, but when he had already started for home his three ships were driven back by stress of weather to the Mexican port of San Juan D'Ulloa. He was received with entire friendliness, but, while he was still in port, a large Spanish squadron arrived on the scene.

The attitude of friendliness was maintained; but Hawkins' suspicions were aroused, and he was preparing for departure when the Spaniards made a sudden attack upon him. Hawkins and Drake, with two of the ships, escaped; but with the loss of a large part of the crews, many of whom fell into the hands of the Inquisition, to be treated not as pirates — for which there would have been technical excuse — but as heretics.

War with Spain
England and Spain were at peace; but from this time forward both English and Spaniards acted on the hypothesis that beyond the line—not the Equator but the Pope's boundary line between Spaniards on the west and Portuguese on the east of it — there was a declared state of war.

Drake's raid
Five years later, in 1572, Francis Drake set sail with a small company in three ships for the Spanish Main, the mainland of South America. The expedition was in the technical sense wholly piratical, that is to say, he intended to seize by force any Spanish treasure which fell in his way.

Cecil, who about this time became known as Lord Burleigh, was perhaps the only prominent Englishman who viewed such proceedings with disfavour; he had in full measure that passion for legality which has usually been so marked a feature in the English character. But the rest of his countrymen, with the queen at their head, had no compunction whatever in encouraging such ventures, participating in the risks, or sharing the profits; although the proprieties might compel them personally to remain in the background.

The Nombre de Dios
Drake seized a quantity of treasure in the Spanish emporium Nombre de Dios on the Isthmus of Darien. Then he laid up his ships, penetrated the Isthmus, saw the Pacific, and swore that he would sail upon those seas. On his way back to the coast he fell in with two treasure-laden mule-trains, and returned, well recompensed, to England.

Drake Sails the Globe
Thence he sailed again on the most famous of all his voyages in the last month of 1577. Meanwhile another adventurer, John Oxenham, more reckless though not more daring, had won the credit of being the first Englishman to sail on the Pacific Ocean, having, like Drake, crossed the Isthmus of Darien and then built himself a pinnace with which he surprised and looted two Spanish treasure-ships. Oxenham, however, was caught and killed. Drake started on his great voyage with the intention of doing what only one man had done before him, entering the Pacific by the Strait of Magellan.

So daring a scheme was undreamed of by the Spaniards, and twelve months after he first set sail, Drake with his famous ship the Pelican, renamed the Golden Hind, began his raids on Spanish ports and Spanish treasure-ships, on the west coast of South America. Enormous prizes fell into his hands; but he evaded the Spanish ships which were sent after him, and, sailing northward with the idea of possibly discovering a north­east passage, he touched at California.

Thither he returned again to refit, when further exploration decided him against attempting the northern voyage. He declined the divine honours proffered to him by the Californian natives, and made his way home through the Southern Archipelago and round the Cape of Good Hope—the first captain who had in person conducted and completed the circumnavigation of the globe. The Golden Hind sailed into Plymouth Sound on September 26th, 1580.

Frobisher
Already another of the great captains, Martin Frobisher, had made three Arctic voyages, in the course of which he explored the waters now known as Frobisher's Sound. During the years ensuing his example was followed by John Davis, whose name stands second only to that of Drake in the list of English explorers.

These are the conspicuous instances of the mighty spirit of adven­ture which had taken possession of the English seamen. Their boundless audacity can be felt by realising that Drake's company on his Darien expedition numbered less than six score; that the Pelican herself was of only one hundred tons burden; and that Martin Frobisher's first ship was of no more than twenty-five tons. The English seamen, in fact, carried the art of navigation to a pitch hitherto unprecedented; and they discovered the all-important fact that with sufficient breezes the sailing ship in skilful hands was a more efficient instrument than the oar-driven galley.

They found by practical experience that a well-handled English ship could sail round a Spanish galleon of thrice the size and pound it to pieces with com­paratively little injury to itself. They learnt how to handle ships and how to build them, how to mount their guns so as to pour in broadsides, while the Spaniard still held the conventional belief that the business of a ship in battle was to ram or to grapple her opponent and.leave the fighting to the soldiers.

Even before Drake's return, and very much more so after it, the English sailors knew themselves a match for the Spaniards. They had learned to hate Spain as the instrument of the Inquisition and also as the monopoliser of the wealth of the New World; top hate her and to crave for her destruction as the enemy of England; and as they had learnt also how her destruction was to be wrought. Their hour was at hand.