James I and the Scottish Parliament 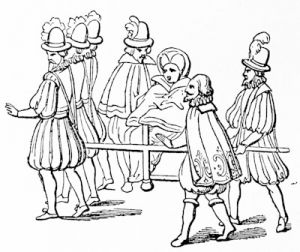 According to the last phase before the Union of the Crowns, it was exceedingly doubtful whether a General Assembly could legally be convened without the authority of the Crown. In 1604 and 1605 James refused to call one, and in the latter year a number of ministers met at Aberdeen, claiming to be the legal General Assembly.

Several of those who had attended were punished, but the amount of sympathy they received made James hesitate to adopt extreme measures. He tried unsuccessfully to convert some of the leaders to his own views by bringing them up to London to consort with the English bishops, but he gained little by this beyond keeping Andrew Melville permanently out of the country. Then the king summoned an informal convention of ministers and laymen, to whom he propounded a scheme for providing each presbytery with a permanent "moderator" or president.

From this he advanced to making the moderators of the Provincial Synods also permanent, each bishop being moderates of his own presbytery and his own synod, and an ex officio representative in the General Assembly.

The permanent moderators in general provided an obvious step towards the development of episcopal government; while Church lands appropriated by the Crown were restored to the Church in order to make provision for an enlarged episcopate. Popular irritation was soothed by the professed application of the funds to the enforcement of the penal laws against Romanism.

But the practical outcome was that when a regular Assembly was held in 1610 it was dominated by the Crown, admitted that no Assembly could be held without the Royal authority, and assented to the extension of the episcopate and of an episcopal authority of a more comprehensive and penetrating character than had been granted when bishops were first introduced.

An important detail was added when three of the bishops were regularly ordained by bishops in England, thus reviving the apostolic succession which, in the Anglican view, constituted the difference between an unrecognised sect and a branch of the Catholic Church. These proceedings were ratified with some further modifications by a parliament in 1612. As yet, however, no changes were made in the accustomed ritual and liturgy of the Church, which still in general retained its Presbyterian organisation.

The next move was made in a General Assembly in 1616. Proposals were made, after some order had been taken for the further repression of Popery, to introduce a revised liturgy, confession of faith, and catechism. It must be remembered that at this time the Presbyterians had not developed their later objection to a stereotyped form of service.

Five Articles of Perth
The proposals were carried, and James then resolved to introduce further alterations after the Anglican model. He had avoided the mistake, in Scotland as in England, of appointing bishops of the High Anglican School. Hence it was with extreme reluctance, and against their own judgment, that they endorsed the innovations embodied in the Five Articles of Perth, which were adopted by the General Assembly held in that city in 1618.

These Articles required the observation of certain Church Festivals, and admitted the private administration of the Sacrament under special circumstances. But the Article which seriously alarmed the Calvinistic conscience was that which required kneeling at Communion, since this was regarded as imply&sing the act of Adoration.

The practice had been retained in England through the firm resistance offered by Cranmer and Ridley to the pressure of Knox and Hooper when the Second Prayer Book of Edward VI was authorised. Alarm and resentment were now aroused; and it was not without difficulty that the ratification of parliament was obtained three years later, while popular sentiment encouraged the clergy to ignore the new regulations.

This sickly monarch died at the age of 16, leaving the throne to his elder sister


His father was Henry VIII

His successor was Jane Grey