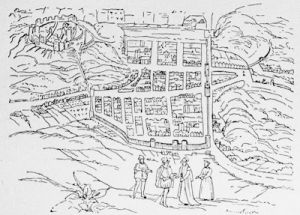 Plan and view of Edinburgh in the early 17th century, from a contemporary print

In England the system of government was fixed partly by statutes explicitly defining the respective powers of the Crown and of the Estates or parliament, and partly upon conventions. There was no question in the mind of any man that the explicit provisions of the statutes must not be over-ridden; there was no question that an established convention ought not to be over-ridden.

The system, that is worked satisfactorily so long as Crown and parliament were in agreement; when they were in disagreement disputes arose as to the actual extent of the powers which the conventions conveyed to one party or the other.

But in England there existed in parliament a definite body which was the legal mouthpiece of public sentiment; a body moreover which could compel the Crown to give at least a degree of consideration to popular sentiment through its power of withholding additional supplies, of which the Crown habitually stood in need over and above its normal revenue.

Now in Scotland there was no such balance of constitutional powers; parliamentary institutions were undeveloped. There was a parliament, but in practice it had become a body merely for registering the decrees of the Government. The Government itself was conducted through the committees which had been known as the Lords of the Articles, whose composition was very largely controlled by the faction among the nobles which was for the time being in the ascendant.

The dissensions and rivalries of the magnates had then enabled the "kingcraft" of King James VI to convert the governing body into a privy council of the Crown's own nominees. The parliament was practically powerless, because the small public expenditure made the Crown virtually independent of the control exercised in England by a body which could refuse supplies until grievances were considered.

The body most nearly representative of popular feeling was the General Assembly of the Kirk, which possessed neither legislative nor financial powers. The weak point in the absolutism of the Crown lay in the difficulty of enforcing its will upon defiant or reluctant magnates who could not easily be crushed by force, or upon a population with whom magnates were disposed to make common cause. So long as the magnates were in tolerable accord with each other and with the Crown, the Crown could take its own course.

The Reformation in Scotland
In Scotland, however, the Reformation had taken a different course. It had been forced upon the Crown by the people instead of being imposed on a not unwilling people by the Crown, as had been the case in England. The system adopted was rooted in Calvinism, and demanded "spiritual independence."

These claims the kingcraft of James VI had enabled him to combat effectually. Before he became King of England as well as of Scotland he had succeeded in establishing the Royal authority within the General Assembly itself and in regrafting Episcopacy upon the Presbyterian system. He had succeeded, because the magnates were with him in opposition to the claims of the Presbyterian ministry, and because in his campaign against the preachers he had been careful not to counter to the interests of the magnates.

This policy James maintained through­out his reign. It was his persistent aim to recast the Scottish Ecclesiastical polity on Prelatical lines, and to assimilate the Church in Scotland to the Church in Eng­land. He was wise enough not to go so fast as to arouse violent popular hostility, while taking advantage of the subsidence of popular passion in connection with the subject. But he went to the utmost limits of safety, if he did not actually transgress them; and in Scotland as in England those bounds were passed by his son.