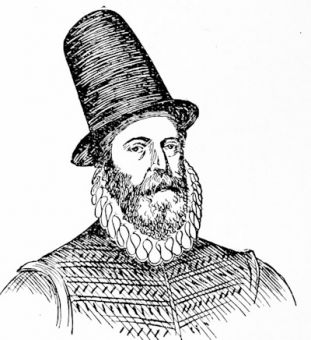 James VI
While England was waging her great struggle with Spain, James VI in Scotland was becoming an adept in the arts of what he was pleased to call "king-craft." When Morton resigned the regency in 1578 the boy was not yet twelve years old. Morton owed his power to the fact that he was very much the ablest and one of the least scrupulous among the Scottish nobility.

He represented that school of statesmen which for some forty years past had definitely regarded union with England on satisfactory terms tor Scotland as the goal to be aimed at. In common with Moray and Maitland of Lethington, he believed that that goal was to be achieved on the basis of the common Protestantism of the two nations, though Maitland's tortuous mind had led him in his last days to seek the union through the restoration of Queen Mary.

But Morton's Protestantism was of a political and Erastian character; that is to say, religion in his view was entirely subordinate to politics, whereas the Scottish preachers, from John Knox downwards, treated politics as subordinate to religion; they looked upon secular policy as a means to establishing their own conception of a theocracy, which meant in effect government by the clergy, who were to stand to the civil power as Samuel stood to Saul.

Tulchan Bishops
The mantle of John Knox, who died in 1572, had fallen upon the shoulders of Andrew Melville, who was as rigidly uncompromising in his demands for clerical supremacy as a Gregory, an Innocent, or a Boniface. But Morton was stronger than the preachers, and he forced upon the reluctant Calvinists the semblance of an episcopal organisation of the Church. His bishops, however, existed merely that their official revenues might be transferred to the coffers of others, whereby they were given the mocking nickname of "Tulchan" Bishops — the tulchan being a dummy calf which facilitated the process of extracting milk from reluctant kine; the Church in this case being Morton's milch cow.

Esme Stuart and the Earl of Arran
Morton's power was broken by the appearance in Scotland of Esme Stuart, who was made Duke of Lennox, and of another James Stewart, not a member of the royal family at all, who acquired an ascendency over the mind of the boy king and was raised to the vacant earldom of Arran. Arran and Lennox, acting in conjunction, destroyed Morton; who was executed on the charge of complicity in Darnley's murder.

On this there followed a duel between the Romanising Lennox and Arran on one side, and on the other the preachers, who relied upon what was then the most representative body in Scotland — not the parliament, but the General Assembly of the Church, a gathering of laymen as well as of clergy.

The Raid of Ruthven
The General Assembly in 1581 succeeded in definitely introducing a Presbyterian organisation, based upon that of the French Huguenots, into the Church of Scotland. This was only a beginning; for Lennox and Arran still retained their ascendency over the king. But among the magnates, though in general they had no love for the preachers, there was a party which had still less love for Lennox. A "band" between them brought about what was called the Raid of Ruthven, the conspirators capturing the person of the young king.

The capture checkmated Lennox, who was obliged to leave the country and died soon after; but Arran still remained; and in 1583 James escaped from his captors and Arran once more ruled the country, from which the nobles who had shared in the Ruthven raid were expelled.

A Scottish parliament at this time was not unlike an English parliament when the War of the Roses was going on; that is, it was usually attended only by the supporters of the existing government, who carried out the behests of their leaders. So the Scottish parliament of 1584 repressed the preachers. It declared General Assemblies to be illegal except when they met under the royal authority, and it reconstituted an episcopate appointed by the Crown, through whom the Crown would be able to control the Church.

Just after this, however, Elizabeth was forced to commit herself to the war with Spain and to a more aggressive championship of Pro­testantism. As matters stood she. regarded the banished lords with more favour than Arran. Pressure from her brought about the restoration of the exiles and the fall of Arran from power.

Presbyterianism and Episcopacy
The result was a government passable though not too efficient, sufficiently subservient to Elizabeth to content itself with feeble protests when the captive Queen of Scots was put to death. The most prominent events were still those which marked a victory either for the preachers or for the king in the contest for effective supremacy. The parliament of 1592 reversed the proceedings of that of 1584, and promulgated the Presbyterian constitution of the Scottish Church.

The contest between Presbyterianism and Episcopacy was not on the face of it a question of theology but of Church government, although the one system attracted Calvinists, and the other Anglicans whose doctrines were less antagonistic to those of Rome. The Presbytery was Democratic in its structure and was a complete departure from the old organisation. Episcopacy preserved the old organisation in a slightly modified form, but when separated from allegiance to the papacy became inevitably allied with the monarchy.

Hence both in England and in Scotland the Crown was antagonistic to Presbyterianism. Episcopacy, the effective control of the Church through bishops nominated by the Crown, requires no explanation for English readers; but in England Presbyterianism, after the Stuart restoration in 1660, fell into such a subordinate position that the system which triumphed north of the Tweed is not commonly understood in the southern country, although there was a time when there also it came near to capturing the establishment.

The Presbyterian system is pyramidal. The constitution obtained in Scotland in 1592 made the base of the pyramid the Kirk Session, the governing body of each parish or congregation, consisting of the minister and presbyters or "elders" appointed by the congregation. Next came the Presbytery or assembly of the ministers and elders of a group of congregations. Then came the Synod, or assembly of a group of Presbyteries; and finally, the General Assembly of the Church, the ultimate controlling authority.

But in the General Assembly the Crown was also to be represented either by the king in person or by a commissioner. The fundamental fact however remained, that the General Assembly was very thoroughly representative of popular feeling, while it considered itself warranted in dealing with all which could conceivably be regarded as entering the sphere of religion. Moreover within each congregation and each larger or smaller group of congregations the different bodice from the Bark Sessions upwards possessed, in the name of ecclesiastical discipline, very extensive powers of interference with and control over the private life and conduct oi every individual.

The king as God's vassal
To the king himself such a system was intolerable. It made every minister the most powerful man in his own parish. It did not, like the Church as conceived by Hildebrand, claim from National Churches allegiance to a foreign potentate of higher authority than their own temporal rulers; but in effect it claimed that higher authority for the ministers of the National Church itself, collectively and individually. The position was expressed by Andrew Melville when he told King James that the King of Scotland was God's "silly" (that is, weak) "vassal," to be obeyed only as an official of his Divine Sovereign of Whose will the ministers were the interpreters.

But the lay magnates of the country were as little disposed as the king to be held in bondage under the preachers. The General Assembly, representative though it was, had not the secular authority of parliament, in which the Church was not represented. An arrangement was now made by which fifty-one representatives of the Church, nominated partly by the Crown and partly by the Church, should sit and vote in parliament; and the Estates also pronounced that if the king should nominate bishops, they should sit of right in parliament as in the past.

The next step was the transfer to the king of the exclusive right of nominating the Church representatives, although he could only select them from lists submitted to him. And finally, in virtue of the powers granted by the Estates, James in 1600 actually appointed three bishops, of Ross, Aberdeen, and Caithness. The wedge was fairly inserted for the complete restoration of the Episcopate.