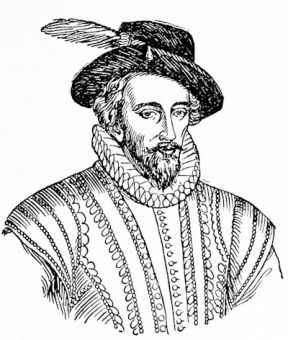 The signs of Spanish recovery [after the failure of the Spanish Armada], however, were sufficiently ominous to induce Elizabeth to give the more aggressive war party a freer rein. Drake and Hawkins were despatched on an expedition to the West Indies, there to discover that the Spaniards had learnt many lessons since Drake's last visit to those regions.

Cadiz
Not much was effected, and both the great seamen died before the expedition returned home. But in the following year, 1596, a severe blow was struck when a force under command of Lord Howard, the Queen's latest favourite the Earl of Essex, and Walter Raleigh, fell upon the port of Cadiz, sank or burnt a vast quantity of shipping, and extracted a substantial ransom from Cadiz itself. Even after this, later in the year, Philip was able to despatch a new Armada, though it was actually shattered by winds and waves and was never subjected to the tender mercies of the English seamen.

Burleigh and Philip of Spain
In 1598 both Philip of Spain and Lord Burleigh died, almost at the moment when a general European peace was restored by the treaty of Vervins. Walsingham had preceded them by nine years. Elizabeth had been fortunate in her great antagonist and doubly fortunate in her ministers. For forty years Philip had dominated Europe. When he came to the throne, Spain and the Netherlands were ins, much of Italy, the inheritance of the New World, the lordship of the seas.

The one recognised maritime rival was Portugal, and in the course of his reign he absorbed Portugal and the Portuguese empire under his own sway. He made pretension to the Crown of England; for his daughter, the child of a French princess, he made pretension to the Crown of France. He was the avowed champion of the Church against heretics, though he was by no means ready to recognise the authority of the Pope over himself. For forty years Philip's shadow lay upon Europe; but during the last ten years of his life, though he never knew it himself, the substance of his dominion had passed from him.

The most patient, the most industrious, the most obstinate, and the most ambitious of men, he trusted no man; and by his distrust he spoilt the work of every man who served him. He conceived of himself as a sort of Fate, moving slowly, steadily, irresistibly, grinding to powder his own foes and the foes of his faith; a Fate which would smite in its own good time. Un­fortunately for Philip, he always deferred the moment for striking till it was too late. He could never grasp the possibility that his intended victim might strike first and do so with effect. Self-confidence is a supremely valuable quality when it is not misplaced; when it is misplaced it is apt to prove fatal.

In caution, in patience, and in industry, Philip was matched by Lord Burleigh, whose main defect as a statesman was a prosaic lack of idealism, which, as well as a still more penetrating intelligence, was supplied by his colleague Walsingham. The conjunction of those two great men was precisely what was needed to counteract and supplement the erratic ingenuity and self will of their mistress, to show her the path she ought to tread—and always at the critical moment did tread, though not as a rule until her capriciousness had driven both of them to the verge of despair.

They were the pilots who steered the ship of state, or rather the navigators who set the course which the actual pilot, the queen, followed after her own devious fashion, evading by the merest hair's breadth the rocks and shoals of which they warned her. The passage had already been accomplished when Walsingham passed to his grave; one whose loyal service to England left him a poor man at the last. Burleigh was already not far short of seventy when the Armada came, and his personal activity was less in the last years of his life.

Younger men were coming to the front: Burleigh's second son Robert, the heir of his policy; the brilliant but little trusted Raleigh; Essex, showy but unbalanced, the queen's personal favourite, though her reliance was reposed rather on the younger Cecil. Less prominent, but intellectually above them all, even above Raleigh, was Francis Bacon, Burleigh's nephew by marriage, son of the Lord Keeper Nicholas Bacon who, through the first half of the reign, had been one of the pillars of Elizabeth's government. These were the men who played the leading parts in the last wintry years of the great queen's life, when her own contemporaries, the men who most had helped to make her great, had passed before and left her in dreary solitude.