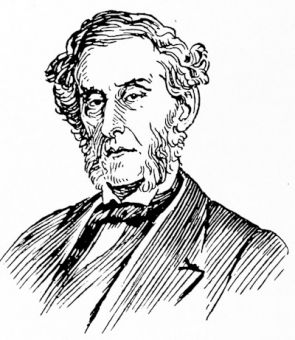 Lord Shaftesbury, from the portrait by Millais

Apart from Ireland Lord Grey's ministry found itself faced with the need for a considerable amount of legislation. The charter of the East India Company required renewal and modification; in 1833 the company was allowed to retain its political position, but was at last deprived of the old trading monopoly which it had hitherto retained as concerned China. But the great questions of which Parliament undertook the handling were of the social and humanitarian type. Grey's Government carried the Act for the Abolition of Slavery and what is commonly called the First Factory Act; and it introduced the Poor Law Amendment Act, which was carried by Melbourne's ministry after Grey's own retirement.

Poor Law Reform
Of the first two measures it may be said that the public conscience recognised their necessity, though it made no very clamorous demand for them. As to the third, Poor Law Reform, every one knew that it was needed, but it was one of those subjects which no Government could take up without the certainty of diminishing its own popularity. The Reformed Parliament did not always take the course which appeared best after the event, but it was' eminently conscientious and faced its problems with a sincere desire to achieve what was best for the public good.

Slavery
The question of slavery was one which had long agitated the. minds of Englishmen. In the last century it had been laid down by Lord Mansfield that no one on the soil of these islands was a slave. By long and deter mined battling Wilberforce and his associates had at last driven home to the public conscience the iniquities of the slave trade and procured its pro­hibition. Great Britain had honourably distinguished itself by the zeal with which in 1815 it had urged the rest of the European Powers to follow its example. But the abolition of the slave trade did not carry with it the abolition of slavery; in the West Indies and in South Africa black slaves were extensively employed in the plantations and farms. Nearly all the hard labour was slave labour, and the slaves were valuable property. It was impossible to abolish slavery, an institution sanctioned by the state for two hundred years, without compensating the slave-owners. Nor could so vast a disorganisation of the existing system of labour be carried through at a blow without disastrous results.

There were absolutely no interests served besides those of the slaves themselves by abolition, except on the theory that free labour for wages would in the long run turn out more economical than forced, a doctrine which did not readily appeal to those who owned the slaves and would have to pay the wages. Nevertheless, British public opinion completely endorsed the Act, which set a term to the time during which service was to remain compulsory, declared that there was thenceforth no property in the persons of slaves, and provided out of British pockets twenty millions sterling to compensate the owners, the largest sum that has ever been raised for a purely humanitarian object without any possibility of a financial return. Huge as the sum was, it by no means satisfied the slave-owners, especially among the Dutch in South Africa, who set an immensely higher value upon their slaves as property than the sum allotted to them by the British Government.

The Factory System and child labour
The demand for a Factory Act was also purely humanitarian in origin, and was viewed with extreme disfavour by many manufacturers and many also of the workmen. The development of factories during the last fifty years, accompanied by the Poor Law System, had brought about an immense amount of employment of children almost from the moment when they could walk and talk. In the depressed condition of labour the working-class parents saw only that the children brought grist to the family mill; they did not see that the cheap child labour diminished the employment and the wages of adults, besides utterly ruining the health, mental and moral as well as physical, of the children. And if the parents of working-class children were callous, so also were the administrators of the Poor Law who were responsible for the workhouse waifs. As a rule the main desire of the parish was to get the children off its hands, and to be free of the expense of maintaining them at the earliest possible moment.

Almost fifty years before, the Manchester magistrates and the Manchester doctors were already awake to the evils for which the factory system was even at that early stage beginning to be responsible. But their powers enabled them to do nothing more than to interfere with apprenticeship in the old standing trades scheduled in the old Statute of Apprentices, which in effect hardly touched the factories. At the same time the Manchester Committees gave full credit to the many cotton mills whose proprietors were careful to observe regulations of their own for preserving the health of the children in their employment. It may here be remarked that Robert Owen in his mills at New Lanark worked on the most enlightened principles, paying good wages and providing for the education of the workmen's children without putting them to any employment.