Scotland in the Norman Period 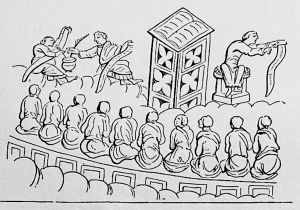 Scotland affords no counterpart to the constitutional struggles with which England had been so largely occupied for three-quarters of a century when Henry III. died; and the process of consolidation which went on in the northern kingdom was also on quite different lines. For England the vital fact was that the country ceased to be merely a portion of the dominions of a European potentate, and that French provinces became merely appanages of the English crown. Scotland, on the other hand, had no foreign possessions and no direct interest in European politics. For her, foreign policy meant relations with only two powers, England and Norway.

But Scotland itself was composed of much more heterogeneous elements than England. A dynasty, which until the middle of the eleventh century was pure Celt, had established a claim to supremacy over the whole of the lands north of the Tweed; but very little Celtic blood ran in the veins of the Scottish kings. Malcolm Canmore's mother was a daughter of Siward the Dane, Earl of Northumbria; his wife was the sister of Edgar the AEtheling; his son David, the progenitor of the later kings of Scotland, married the heiress of Siward's son Waltheof.

Thus the royal family was to an immense extent Saxonised, and as time went on became also very much Normanised. Of the dominions over which it ruled, two-thirds of the Lowlands and much of the eastern coastal districts beyond the Forth, though still perhaps mainly Celtic in race, were Teutonised in character; but Galloway at least, on the west, and the whole of the highlands, were almost entirely Celtic; while the population of the islands was partly Celtic and partly Norwegian; and Caithness, as well as the Orkneys and Shetlands, was almost entirely Norwegian.

The Celtic highlands resented the supremacy of the Anglicised royal house, and whenever it suited them supported any pretenders to the throne who might appear of whom there were two groups, one the MacHeths claiming by descent from the son of Lady Macbeth, in whose name Macbeth himself had seized the crown; while the other group, the Mac-Williams, descended from an elder son of Malcolm Canmore by his first marriage.

So that there was, broadly speaking, a Scandinavian or semi-Scandinavian fringe which leaned towards Norway, a great Celtic population covering nearly the whole of the north and the west which still clung to the old tribal system and detested the Anglo-Norman form of feudalism, and a large Teutonic or Teutonised population, mainly in the Lothians which accepted the Anglo-Normanised monarchy and its Anglo-Norman institutions. But this section, the wealthiest and the most progressive, remained stubbornly antagonistic to the English of England; while the kings resented the English claims to overlordship, and at every available opportunity made counterclaims on the English counties north of the Tees.

The period of wildest anarchy in England, when Stephen was king, was the period when David I in Scotland was organising unity in Church and State, extending Anglo-Norman institutions; and introducing a very considerable Norman leaven into what was now becoming the Scottish baronage. David died a year before Stephen.

Malcolm the Maiden
His eldest grandson and immediate heir was placed on the throne as Malcolm IV (nicknamed the Maiden) at the age of twelve; and was followed twelve years later by his brother William, called the Lion. William died in the fifteenth year of his reign, two years before King John. We have already seen how he was captured in the reign of Henry II, when raiding the north of England with intent to assert his claims in Northumberland and Cumberland and how he was compelled to/do homage for the kingdom of Scotland to the King of England by the treaty of Falaise, which was abrogated fifteen years afterwards by Richard Coeur de Lion.

After this time the Scots claim for Northumberland and Cumberland was not again made a pretext for war, although it was from time to time asserted when the King of England appeared to be in a dangerous strait. Moreover, for a hundred years no attempt was made by any King of England to enforce a claim of sovereignty over Scotland; though on sundry occasions when a Scots king did homage for possessions in England the English king sought without success to exact homage for the Scottish crown also.

The last of the MacBeth and MacWilliam insurrections were suppressed on the accession of William's young son Alexander II, a vigorous monarch who reigned from 1214 to 1249. He met his death on a western expedition, undertaken in order to bring under his dominion the southern, isles, which at this stage professed allegiance to Norway. Twelve years earlier he had finally settled the Northumbrian question, by commuting his claims for estates in those counties held from the King of England.

His son and successor Alexander III was only a boy of eight, and the years of his minority foreshadowed what was afterwards to become the normal state of affairs on the demise of a Scottish king. A child succeeded to the throne, and opposing factions of the more powerful barons endeavoured to capture the person, of the young king and the authority oi the regency. When young Alexander came of age, however, he asserted his authority undisputed by either of the rival factions; and very shortly afterwards the Norwegian question was settled as the dynastic question in Scotland itself had already been settled.

The Battle of Largs
Alexander resolved to assert his authority over the islands. The chiefs appealed to King Haakon of Norway, and according to Scottish tradition Haakon attempted to make good his own claims by an invasion on. the west. The Norsemen were routed at the Battle of Largs, and three years later Haakon's successor, Eric, King of Norway; ceded to Alexander all his claims on the islands except the Orkneys and Shetlands. King Eric subsequently married Alexander's daughter, Alexander himself having married a daughter of Henry III. Broadly speaking, the whole period under review was one of prosperity for Scotland.

After the Norwegian treaty following the battle of Largs the authority was recognised over the whole of the mainland and the islands from Cape Wrath to the Solway. The risk of political disruption or of a dynastic overthrow had practically disappeared; and in the Lowlands at least; north as well as south of the Forth, the Church nourished and commercial towns were developing. No one anticipated the storms which were destined to arise after the death of Alexander III.

<< Norman Society - Scotland in the Norman Period - Edward I >>