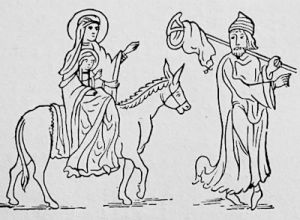 Travellers in Anglo-Norman dress, from a 12th century MS.

The villeins of Domesday had been freemen; by the time of Henry II they had. become in the eyes of the law serfs bound to the soil. But with the development of the new conditions they ceased to be the victims of perpetual oppression. In practice they were not greatly affected by the change in their legal status, to leave the soil on which he was born, and if he did so wish, the difficulties would in general have been almost insuperable. But we have now to distinguish.

Villeins and free men
The villein had now come to be roughly identified with the man who held his land from a lord to whom, he owed agricultural service, while he who held by payment in coin or in kind was generally looked upon as a free man.

The effect of the Conquest had been to transfer large numbers of the latter class to the former. But with the new conditions came an increasing tendency to allow services to be commuted for payment; with the necessary complementary tendency to employ labour for which wages were paid, in place of the compulsory labour which was commuted for rent.

This movement was further facilitated by the growing employ­ment of coin as a medium of exchange and of payment, in place of the more primitive methods of barter and payment in kind which necessarily prevailed when the precious metals were generally unavailable.

The change marked improved relations between the lords of the soil and the actual cultivators, a gradual passing of the feeling that the one class were practically the chattels of the other. But it does not otherwise imply any material modification, in the manner of life of the rural population. A more prominent feature, however, of the period is the development of the boroughs.

Growth of Towns
The borough or town, in the sense in which we shall now use that term, was, as we have seen, at the time of the Conquest, merely a larger tun township or village, formed either by expansion or by the aggregation of two or more townships in a single community. Life in the town did not differ essentially from life in the village the population -was mainly concerned with agriculture. But so far as trade existed, the town was the centre of trade.

Within this larger community men specialised to a greater extent in the few handicrafts which were practised. Thither to market or to fair came the village folk who had produce to exchange for goods which their own labour could not provide.

The Norman demanded more and better goods of various kinds than had satisfied the Saxon; and the Conquest brought in its train foreign merchants 'with manufactured wares to sell, and willing to buy the raw materials which were the only English produce of which they stood in need. Foreign commerce in the sense of commerce with foreigners in England increased, for the English themselves did very little in the way of direct import or export.

Roughly speaking, the trade within each county or shire was concentrated in one or two boroughs, and, on a larger scale, in the half dozen leading towns in the kingdom, London and Winchester, York, Lincoln and Norwich, and Bristol.

The borough lay sometimes within the lordship of a single manor; more often perhaps two or more lords of the manor had jurisdiction within its borders. It was also subject to the jurisdiction of the king's officers, often because it had originally acquired its dignity as a burh, a fortified, garrison town.

It regarded its neighbours with jealousy and counted their citizens foreigners, to be admitted to the privilege of trading only because it was inconvenient or impossible to do without them; so they were to be generally discouraged and made to pay for the privilege.

Borough Charters
The boroughs were already possessed of certain powers of self-govern­ment separating them from the jurisdiction of the shire authorities, but they had a natural desire to be free also from manorial control and from that of the king's officers.

Throughout the early Plantagenet period one borough after another acquired immunities or privileges by a charter or a series of charters obtained from the lords of the manor and the kings.

These rights were not granted for nothing, since they involved the surrender by the authority which granted the charter of rights financially valuable, tolls and fees. In one way or another the charters were purchased at a price, and were granted most readily by kings or lords when in want of money.

The powers and rights conferred by the charters were not identical in form, but the same two objects were always in view immunity from outside jurisdiction, which was to be vested instead in the freemen of the borough, and authority to establish a gild-merchant having power to regulate trade in the borough.

On the other hand, the gild was not a private association which captured the control of trade, but was a body to which every burgess was entitled to belong if he chose. The term merchant had not, it must be remembered, its modem signification; the manufacturer, the wholesaler, and the retailer had not been differentiated. Every one without distinction who sold goods was a merchant.

The gild-merchant could carry its regulations down to the minutest details. It could fix wages and prices, standards of quality, the time at which work might be done. The idea of free competition had not come into existence.

Buying and selling was, of course, a matter of bargaining, bur no one had any doubt that a public authority was entitled for the public good to draw the line between fair and unfair bargaining. It was the legitimate business of the gild-merchant to take such measures as it thought fit to ensure good workmanship, fair dealing, and fair wages and prices.

This corpulent monarch's nickname before taking the throne was 'Prinny'