Origins of the Domesday Book 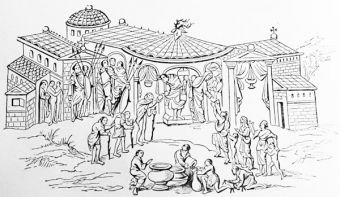 A manor house of the 11th century

Royal revenue
Both before and after the Norman conquest the king was expected under ordinary circumstances to live "of his own"; that is to say, to pay all the expenses of government as well as what we should call his personal expenses out of his own regular revenues.

Those revenues were drawn partly from his personal estates. These estates were always being reduced by grants to individuals, by way of reward, or to the Church.

On the other hand, they were increased by forfeitures when a vassal indulged in open treason or persisently refused to carry out his feudal obligations. Also they were increased by "escheat"; that is, when a vassal died leaving no heir with a legal claim to inherit, his estates reverted to the Crown, The next source of royal revenue was in the fees or dues payable by vassals upon various occasions.

Thus, when death caused an estate to change hands the heir had to pay fees to his overlord upon taking up his inheritance; and there were further dues payable while the heir was a minor and in connection with the marriage of heiresses. These were always payable by the vassal to his overlord, and, consequently, to the king in connection with the estate of every tenant-in-chief.

The terms tenant-in-chief and baron appear primarily to have been practically interchangeable; and in this wide sense of the term baron the old thegnhood was in effect absorbed, since the thegns or those who took their places and lands were all tenants-in-chief holding from the king. Finally, as regular revenue, the Crown claimed judicial fines and various local dues in the shape of tolls, the price paid for local privileges.

Danegeld
But beyond these the Crown had a special claim to what was in theory a war tax, the tax on land called the danegeld. This was the name originally given to the tax which AEthelred raised by the advice of his Witan in order to pay his ever-increasing ransoms to the Danes. As ransom it was raised for the last time by Knut in his first year, when he doubled the greatest of the previous exactions and finally paid off the Danish host.

But from that time the danegeld was levied by the kings, nominally as a war tax and apparently at their pleasure; and in it the Conqueror and his son William II found an exceedingly productive source of revenue. But however mercilessly the Conqueror might exact every penny which could be got out of the land, he wished to do it scientifically and with an even hand; and it was with this object in view that he instituted that great survey of the country which was recorded in Domesday Book and the docu­ments connected therewith in 1086, being the report of the commission which had been employed upon the work for some time previously.

Why compile the Domesday Book?
Domesday Book was compiled with the object of ascertaining precisely the taxable value of the land all over the country. It does not include the northern counties, partly because of the greater difficulty of dealing with those wilder regions, and partly because William himself had so harried them that their taxable value was of very little account.

Having this object in view, it took account of everything which affected either taxable value or the means of collecting taxes. Although, unfortunately, what was perfectly clear to contemporaries is not always equally clear to later ages, Domesday Book is a valuable and unique authority as to the condition of the country, in spite of the difficulties of interpretation.

The manor
In Domesday we first come across a very important and very contro­versial term, the manor. In actual practice the manor very frequently corresponds to the individual settlement - tun, township, ham, or village - which was the unit of the Anglo-Saxon system, a unit which in the Norman terminology becomes the vill or villa.

Hence came the idea long prevalent that the manor and the vill were originally identical; that each vill had its lord of the manor with his private demesne, while the rest of the soil was occupied chiefly by the villeins, villam, vill-people, who owed him service. But this is not the actual fact, though it approximates to it.

The manorial arrangement therefore, cannot have been part of the original settlement, but was a subsequent development or extension of what was at first only occasional; when the free ceorl found it advisable to commend himself to some lord, even then the ceorls of one community did not necessarily elect to commend themselves to the same lord, though it was more often convenient to do so than otherwise. Thus we find quite small holdings described as "held for a manor" without having any lord of the manor.

Taxes
In fact it would appear that the Domesday manor is a term meaning a taxable unit. The lord of the manor is responsible for the taxes of all holdings within his manor, whether it forms one vill or many vills.

The man who holds his "virgate" or thirty acres without a lord at all holds it "for a manor"; while the men who hold of a lord are divided into two, classes - the freemen, liberihomines, and "socmen," who normally pay their taxes direct, but for whom their lord is ultimately responsible; and the villeins, bordars, and cottars whose taxes are paid by the lord himself. To these last are to be added the actual servi or slaves.

It does not appear that at this stage there was any political dis­tinction between these two classes; they were nearly all free ceorls. Nor is there any definite distinc­tion between the methods of tenure.

It is further to be observed that socmen and freedom from agricultural service were much commoner in the districts where there was a substantial Danish population, where also slaves were practically non-existent, while slaves were comparatively numerous on the Welsh marches.

But it is also easy to see that while there was nothing in itself servile in the payment of taxes through the lord any more than there is anything servile in "compounding" for rates at the present day, the man who did so could be much more readily reduced to a servile condition; and consequently a hundred years later we find that the villein has degenerated into a serf bound to the soil, whereas the socman has not. Also the villein has come to be more and more identified with the man who has to submit to particularly obnoxious forms of service from which the socmen and the successors of the socmen are free.

Domesday, then, was not occupied with the classification of the occupiers of the soil according to the amount of freedom which they possessed, but with the taxable value of their holdings and with the question who was responsible for paying the taxes; and hence we derive from it no light on the amount of control possessed by the lord of the manor over the socmen or villeins on his estate.

What we do have recorded is the nature of the service or rent which they were liable to render, and the most minute details as to the value and productive uses of the land. The record also shows that during the first year after the conquest large numbers passed out of the class of socmen into the class of villeins; although at a later stage the double tendency developed to commute services for rent, and to treat freedom from services as a prima facie proof of freedom as opposed to serfdom, the essential feature of the later serfdom being that the villein was bound to the soil and could not leave his holding without his lord's consent.

It is not, however, at all clear that at the time of the conquest the villein was in this sense a serf; the idea of serfdom may have become attached to villeinage through the interpretation of customs by Norman lawyers trained in the theories of Roman law.

Manor houses
Norman castles sprang up as we have noted all over the country; but we must not imagine that the ordinary Norman baron habitually lived in one of those stone fortresses. William's followers were endowed with few manors or with many; the baron or tenant-in-chief who got one manor lived in his manor-house, which was no more than a. substantial farmhouse; if he had more than one manor he might move from one manor-house to another, or he might fix his own residence in one or two and plant his bailiffs in others. But the manor-houses were not supplemented by castles except with the king's leave, and with the intention of making them serve as military centres for holding the country down.