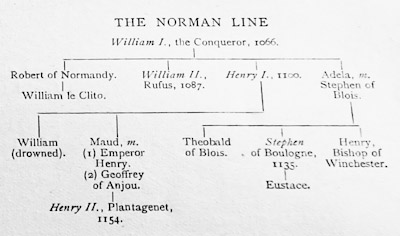 Of the Conqueror's sons, Robert the eldest was a valiant soldier, the only man of his time who got the better of the old Duke in single combat. He was good-natured, indolent, and irresolute. The Conqueror held him. in complete contempt, and only allowed him the succession in Normandy because he could not help himself.

Whereat the barons rejoiced, since they knew that Duke Robert was wholly incapable of controlling them. Richard, the most promising of the family, died before his father, who commended the third son William the Red to the English succession.

The Character of William Rufus
William Rufus was as fiercely energetic as his father, a typical headstrong, self-willed, fighting man, who regarded not man nor feared God except when the terror of death came upon him. His energy took him in fits, and while the fit was on him he pursued his immediate purpose with vigour and determination; but he lacked his father's dogged patience; and while he was capable of forming vast designs, he was not capable of planning them out and developing them systematically.

And between the fits of energy he surrendered himself entirely to the pursuit of pleasure and the gratification of his passions; while his sole virtue besides physical courage was his appreciation of courage in others.

Such was the man whom William I commended, to Lanfranc and Lanfranc commended to the magnates of England as his successor. William hurried over from Normandy while his elder brother was far away. On his promise to be guided by Lanfranc he was immediately accepted as king. Within six months came the first revolt in favour of Robert.

A large proportion of the barons of England were barons of Normandy also, whom it suited much better to owe allegiance only to the incompetent Robert than to owe it to Robert for their Norman possessions and to the fierce Red King for their lands in England.

Ranulf Flambard
William promptly appealed to his English subjects, who joyfully answered the summons to the fyrd and the chance of striking, a blow against their oppressors; while William made them large promises of good government.

The revolt was crushed and the promises were cynically ignored. Lanfranc died, and William took for his chief counsellor Ranulf Flambard, a fit instrument for his purposes. Ranulf's primary object was to enrich the king and himself more or less under cover of law and he set himself to systematic business of extortion and robbery.

Fortunately for the people of England the extortion and robbery were directed against William's feudal tenants; that is to say Normans rather than English partly because there was more to be got out of them, and partly because it was more necessary for the king to keep them under his heel.

And for this latter reason also William’s hand fell heavily upon them when they in turn applied robbery and extortion to the English; it suited him to have the English on his side. But where he himself or his own chosen companions were concerned a like protection was not extended to the people.

In one of its aspects the story of the reign appears to be a mere welter of wars and compositions with Robert of Normandy, and of conspiracies and revolts on the part of one baronial group or another, ferociously stamped out, which it is hardly worth while to disentangle, William was an able soldier, who nearly always struck swiftly and fiercely, and nearly always with success. The outstanding fact of importance was that the supremacy of the Crown was in every case triumphantly asserted.

The Church
Perhaps the episode of the reign most characteristic of the man and his time was that which concerns the relations of William with the Church. One of Ranulfs devices for obtaining revenue was that whenever one of the higher ecclesiastical appointments fell vacant it was allowed to remain so, and William seized the revenues for himself instead of putting in a financial administrator during the period of vacancy.

It was not till four years after the death of Lanfranc that a new Archbishop of Canterbury was appointed; and then it was only because William was stricken with a severe illness, and in the fear of death endeavoured to square his account with Heaven by naming the saintly Anselm of Bec for the archbishopric.

Anselm of Bec
When William recovered he returned to his old courses; but he found that Anselm’s apparent meekness cloaked immovable resolution whensoever questions of right and wrong were involved. He was not in the least afraid of rebuking the king to his face, nor could he be terrorised into submission to the king's will when the king required him. to do what he thought wrong.

It was not long before the position became unendurable, when, curiously enough at first sight, the bishops took the king's side and the barons with grim unanimity supported the Archbishop. But Anselm took the only dignified course and withdrew from the country.

The Crusades
Of less importance to England than to Europe was the beginning in William's reign of the crusading movement. The recovery of the Holy Sepulchre and its retention under Christian dominion for two hundred years carried off to the East occasionally great hosts of crusaders and, besides these great expeditions, a constant stream of military pilgrims. English crusaders, however, belonged chiefly to the latter group.

The only crusade which takes a prominent place in our own history is that which took Richard I to Palestine. England was touched only by the fringe of the crusading movement, and was affected by the first crusade only because it took Duke Robert of Normandy away, and thereby stopped for a time the quarrels between him and his brother in England, and afterwards enabled his younger brother Henry to secure the English throne without difficulty.

Scotland
The years when Rufus was reigning in England were of considerable importance in the history of Scotland. On his accession Malcolm Canmore was still reigning in the northern kingdom with his English Queen Margaret at his side.

His own English predilections have been noted, and his whole reign was marked by the Anglicising movement and the transfer of the political centre of gravity from the Celtic highlands to the Teutonised lowlands; a change, however, which, instead of tending to a fusion of the English and Scottish, nations, made the once English Bernicia, ox so much of it as was comprised in.

Lothian, more intensely antagonistic to the southern English of the English kingdom than had been the Celts of the kingdoms of the Scots and Picts. The Celts of the highlands retained for the Saxons, the "Sassenachs," of Scotland, very much of the sentiment which they had formerly felt towards the English, and resented their political supremacy more than they feared an English domination.

Death of Malcolm Canmore
Malcolm himself had no friendly feeling for the Normans, who had ousted his wife's family from the English throne; and he found various excuses for raiding across the Tweed, though, when either William I or William II, marched against him, he generally succeeded in making terms satisfactory to himself. But on one of these raids he was killed, in the fourth year of the Red King's reign.

Margaret had taken care that Malcolm’s children should be extremely English, and the Scots, jealous of southern influence, made Malcolm’s brother, Donalbane, king instead of one of the sons of Malcolm and Margaret. In this temporary revolution Donalbane was also supported by alliance with the Norsemen, by whom the Hebrides were to a great extent occupied, and with the king of Norway.

It is not improbable that the ultimate success of Donalbane would have meant the partition of Scotland into a Celtic and a Norwegian kingdom, with further results which offer ample room for interesting speculation. But after sundry vicissitudes Edgar, one of Malcolm’s sons, recovered the throne of Scotland largely by the help of volunteers from England, who were permitted to join him on condition of his promising allegiance to Rufus.

Norway was bought off by what was practically the cession of the Hebrides. Edgar personally remained loyal to his pact with the king of England, though his successors did not hold themselves bound by it; and Malcolm’s house was permanently established on the Scottish throne.

William's Death
The evil days of William Rufus were brought to a sudden conclusion In the year 1100, before Robert of Normandy had returned from the first crusade, William went a-hunting in the New Forest, and an arrow from the bow of one of his companions killed not a stag but the king.

The body was left lying where it fell, while those who had seen the accident galloped off with the tidings to Prince Henry, who was one of the hunting party and Henry, without a moment's delay, made straight for Winchester to secure the royal treasure, and, having done so, to secure his own succession to the throne of England.