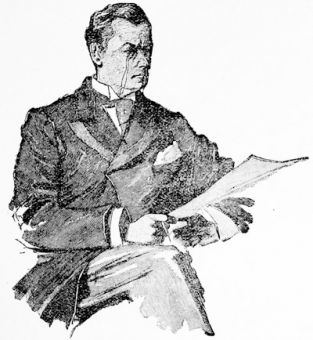 Mr Joseph Chamberlain, from a drawing by W. Hodgson, 1895

When Lord Salisbury took office for the second time the Liberal Unionists no longer declined a coalition. They were powerfully represented in the new Cabinet. Lord Harrington had some time previously succeeded to the dukedom of Devonshire, and the leadership of the party in the Commons had passed to Mr. Chamberlain, whose former militant Radicalism was being rapidly merged into an equally militant Imperialism, which caused his appointment to the Colonial Office to be hailed with satisfaction by all those who were inclined to condemn the indifferentism of colonial policy in the past.

The now unqualified alliance of Lord Salisbury and the Duke of Devonshire in the Lords and Mr. Balfour and Mr. Chamberlain in the Commons formed an exceedingly powerful combination, which was the more effective as there were dissensions among the Liberal leaders and Mr. Gladstone had now completely withdrawn from parliament.

Jameson's Raid
Colonial affairs were no longer to permit of indifferentism. Before the ministers met parliament in January 1896 came news from South Africa that Dr. Jameson had entered the Transvaal at the head of an armed force, and that after a short engagement he and all his men had become the prisoners of the Boer government. Since the retrocession in 1881 the British public had very nearly forgotten South Africa; but this unexpected incident, coupled with an impassioned war song from the pen of the poet laureate, startled it into a renewed interest which was rapidly intensified as the situation developed.

Cecil Rhodes
The retrocession had been followed by the London Convention in 1884, which, while unfortunately indefinite on certain points, expressly precluded the Transvaal government from forming relations of its own with any foreign Powers, or from territorial expansion.

In the old days any deter­mined disposition on the part of the Boers to extend their borders in the interior would have probably been allowed entirely free play. But a new spirit was abroad, incarnate in the person of Mr. Cecil Rhodes, an English­man who had gone to South Africa in search of health and remained there in pursuit of empire.

Mr. Rhodes dreamed of a vast African dominion under the British flag stretching from the Cape to Cairo. His energy created a chartered company which acquired territorial rights, overthrew the Matabele king Lobengula, and cut off the Boer state from all expansion northwards. When the republic endeavoured to find an outlet to the sea, its enterprise was again checked, when the intervening territory was brought under direct British administration.

President Kruger
Now the Transvaal Republic might, like the Orange Free State, have simply remained as a small shut-in self-governing state without creating any disturbance. But the Transvaalers were the sons of the stalwarts who fifty years before had sought to escape from all British control. They looked upon South Africa as a Dutch not a British inheritance; they resented the limitations imposed on them by the British, and their experience had not taught them any respect for the British Empire.

Their president, Paul Kruger, had himself gone on the great trek in his boyhood. It is not possible to doubt that President Kruger dreamed his own dreams of a United South Africa, but a South Africa under a Dutch flag, not under the Union Jack; though how far those dreams were shared by others is not equally clear. But whatever his ambitions outside the Transvaal, within the borders of the republic he intended to go his own way.

Gold Discovered in Transvaal
In 1885, however, the discovery was made of valuable goldfields within the territories of the republic; aliens, Uitlanders as they were called, for the most part British subjects, whatever their actual nationality might be, poured into the Transvaal to exploit the mines. The Boer government had no objection to the exploitation of the mines on its own terms, which did not include the concession of citizenship to the Uitlanders till after a very prolonged residence.

All the burdens of citizenship were laid on the Uitlanders without its privileges. The Uitlanders began to feel that they had no security for justice, and to demand approximately the opportunities for acquiring citizenship in the Transvaal which were readily accorded to the Transvaaler who migrated into British territory.

The objection of the Boer to admitting the Uitlander to political power was natural for obvious reasons. The Boer population was small; if residence there was made too attractive to the aliens they would soon outnumber the legitimate demand was that Uitlanders should be entitled to the franchise after five years' residence; President Kruger was only prepared to submit to the "Volksraad" a proposal for enfranchisement after seven years' residence if as a preliminary, the British gave an unqualified undertaking to abstain entirely from further intervention in the future.

Beginnings of War
In England the belief was perhaps general that the Transvaal would not fight, and that if it did the Orange Free State would stand neutral. In the Transvaal there was a general belief that the British would give way after one or two reverses, and that even if they did not Europe would intervene and compel them to submit.

On October 9th President Kruger delivered an ultimatum requiring the immediate withdrawal of the British troops which had been assembled at points on the frontier. On the 12th the Boers crossed the Natal border in force and the great South African War began.

What important document was signed at Runnymede in 1215?


The signing was forced on King John by his rebellious barons