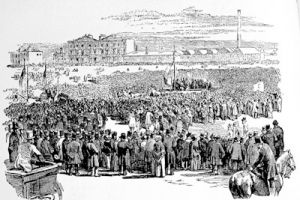 The Monster Chartist Meeting on Kennington Common, April 10, 1848, from a print in the Illustrated London News of 1848 made after a daguerrotype

The Russell Government survived for eighteen months after Peel's death. Its end was hastened by the compulsory retirement of Lord Palmerston from the Foreign Office, where his autocratic disregard of the right of his sovereign and his colleagues to information and consultation on high matters of policy at last became intolerable both to the colleagues and to the sovereign.

He got his revenge - "Tit for tat with Johnny Russell," as he said - a couple of months later by helping the Opposition to defeat the Government on a bill for constituting a militia. Lord Derby, formerly known in the House of Commons as Lord Stanley, accepted office as leader of the Conservative party, with Disraeli as his Chancellor of the Exchequer and leader in the House of Commons; though the old Conservatives were still very far from trusting the man whom most of them regarded as an adventurer, though one who had rendered great services to the party and was conspicuously, beyond all comparison, its cleverest member.

The independence of Lord Palmerston at the Foreign Office, even in the last Liberal administration, had been a constant source of friction in the Cabinets. While always maintaining the Canningite position that each European state should be left to settle its own domestic affairs without the application of compulsion by other states, he had no compunction about tendering unasked advice which often aroused irritation in foreign chancelleries.

But if his activities seemed meddlesome and, on some occasions, dangerous, his buoyant assumption that Great Britain was entitled to express her own opinions with entire freedom and was quite capable of backing them by force of arms if she thought fit to do so was not unpopular. His self-assertiveness was the cause of Russell's failure to form a Liberal government at the end of 1845, since Lord Grey refused to join the Cabinet if Palmerston went to the Foreign Office.

In 1846, however, Lord Grey withdrew his objection. The European convulsion of 1848 again gave Palmerston scope for his activities; the sympathies of Britain with the popular and nationalist movements were vigorously expressed, though without much actual influence on the course of events; and England became an asylum for many refugees from despotic governments and for revolutionary propagandists, while the monarchical governments were extremely indignant, because in their eyes Palmerston was fostering anarchy and revolution in their dominions.

Attacks on Palmerston
In 1849 he was hotly attacked in Parliament both by the non-interventionists, who protested against his meddlesome policy, and by the Radical sympathisers with the revolutionary movements, who were of opinion that British intervention ought to have been carried much further. Palmerston, however, successfully vindicated his position on the ground that on the one hand it was the imperative duty of Britain to express her opinions emphatically and forcibly, but that on the other hand it was not her business to embark on hostilities in order to give those opinions effect.

The attack, however, was renewed when Palmerston sent a British fleet to the Piraeus to coerce the Greek government in connection with what was known as the Don Pacifico incident. The house of Don Pacifico, a British subject resident in Greece, had been sacked by a mob; there were other claims of British subjects against the Greek government which it persistently ignored. There was an unfortunate misunderstanding with France, which had endeavoured to mediate.

Again Palmerston was attacked for the high­handed methods which he had adopted. Nevertheless, he again vindicated himself in a speech which won the warm admiration even of those who, like Sir Robert Peel, disapproved of his action. It was not his policy but his personal independence which caused his dismissal.

Palmerston's Fall
Shortly after the great debate just referred to, Lord Palmerston's interference on his own responsibility in the extremely complicated German question of Schleswig-Holstein, on lines which were by no means pleasing either to her Majesty or to the Prince Consort, caused the queen to send a memorandum to the Prime Minister protesting against the Foreign Secretary's arbitrary methods, and requiring that he should give distinct information to her as to his proposed action in any given case, and that when that action had been sanctioned it should not be modified without her knowledge.

Palmerston formally accepted the rebuke, but made little alteration in his practice; and before the end of 1851 he sent despatches and instructions in connection with the coup d'etat by which Louis Napoleon had just seized the supreme power in France, without informing either the queen or his colleagues. It was this which caused the queen and Lord John Russell to insist upon his resignation.

The newly formed ministry of Lord Derby held office only on sufferance; the Peelites refused to join them as they had refused to join the Liberals; and it was only by conciliating Peelites and moderate Liberals that the Government could remain in being. There was therefore no possibility of a return to Protection.

The situation was not effectively changed by a slight increase in the numbers of the party at a general election; and although Disraeli pledged himself to the maintenance of Free Trade, the Government was defeated on its financial proposals. Lord Derby resigned, and a coalition was formed between the Liberals and the Peelites, with the Peelite Lord Aberdeen as the head of the ministry, in the last week of 1851.

Wellington's Death
A few weeks before, the old Duke of Wellington had passed away. A strong man whom his soldiers had trusted utterly but never loved, a states­man who might have been a great emperor but was wholly unfitted for party politics, a public servant who set his duty to the Crown and to the state above all other considerations, the Duke was in the ordinary sense of the term a political failure; but his failure was more honourable than most other men's success.

In his later years he won a popular esteem and even affection which had been denied him in his day of triumph. In the hour of his death all men of all parties united to honour and to mourn for the Great Duke as they had honoured and mourned for no other since the death of Chatham.