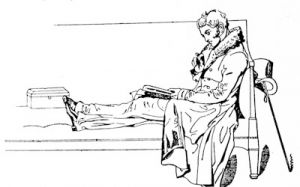 Lord John Russell, from the drawing by Millais
Lord John Russell's ministry was not fruitful of legislation. The Liberals were in a minority in the House of Commons and were in effect dependent upon the support of the Peelites, the members of the Conservative party who had followed their chief in becoming Free Traders, a general election during 1847 strengthened the party, but still left it without an actual majority. At the outset the domestic interests were absorbed by Ireland, where the potato blight reappeared with even increased virulence; and the Government was very much hampered first by its efforts to provide relief and then by the disturbances which followed upon the extreme distress. Fielden's Factory Act
The most notable legislative measure for England was the Factory Act which bears the name of Fielden, the outcome of the dissatisfaction left behind by the Factory Act of the last ministry. Its leading feature was the introduction of what was called the ten hours' day. The meaning of this was that the legal day as opposed to the night became the period of twelve hours from 6 AM. to 6 P.M. Only between those hours therefore was the employment of women and young persons permitted, night work being prohibited. As it was required that two hours should be allowed for meal times, their actual working day became one of ten hours.

In form, it was no part of the purpose of legislation to control the hours of adult male labour; but the practical effect was that the men's hours had to be adapted to the altered arrangements for women, and in effect the Act secured a ten hours' day for men. There was much vehement opposition at the time, accompanied by elaborate demonstrations that if the hours of work were reduced profits would vanish. The event proved that the demonstrations were fallacious, because it was very soon found that with the shorter hours the work was more efficient and the output of the ten hours was worth at least as much as the output of the longer period.

European Revolt
In 1848 the unrest of peoples and nationalities on the European Continent broke out in a series of revolutions or insurrections, initiated by the deposition of Louis Philippe in France and the proclamation of a republic in that country. In Germany the risings were popular, in Italy and throughout the heterogeneous Austrian Empire they were nationalist. But in these islands there was only a very mild reflex of the disturbances which agitated Europe - a singularly futile insurrection in Ireland and in England an equally futile demonstration on the part of, the Chartists, which proved to be the death-blow of the movement. Inspired by the bloodless but effective revolution in France, the more extreme among the Chartist leaders started a clamorous agitation throughout the country. Violent speeches were made, with some talk of the establish­ment of a republic.

Chartist Petition
A monster meeting was to be held at Kennington Common on April 10th, when a monster procession was to carry a monster petition to the House of Commons. The alarm in London was extreme, but prompt measures were taken to establish security. A huge number of special constables were enrolled, among whom was included the French exile Louis Napoleon, the nephew of the great Emperor. Under the direction of the Duke of Wellington London was thoroughly but not too ostentatiously prepared to deal with a desperate insurrection. The Chartist leaders were warned that their procession would not be permitted to pass the Thames.

The monster meeting mustered only some thirty thousand, the leaders took to heart the polite but emphatic warnings they received, the procession did not march into London, and the petition was conveyed to the House in a cab. Inspection proved that an enormous proportion of the two million signatures were fictitious, and the terrifying spectre of Chartism as a revolutionary movement collapsed amid derision into utter insignificance.

Death of Peel
The only other domestic event of political importance, which needs to be recorded here was the death of Sir Robert Peel in 1850. His career had been unique, though that of his disciple Gladstone offers some resemblances. Born a Tory, a ministerialist in the days when the reaction was predominant, he passed his whole political life in gradually shedding his original political assumptions and adopting views to which he had once been antagonistic. Every definite measure with which his name is associated was one which had been advocated by his opponents; to nearly every one he had himself long offered convinced opposition, from Catholic Emancipation to the abolition of the Corn Law. Each of those measures he carried when at the head or almost at the head of a Government representing a party which only accepted them with extreme reluctance; but in every case he acted upon the clear conviction that the measure, whether popular or not, had become a necessity of state.

Few men have the courage openly to declare themselves converts to views of which they have been open and prominent opponents. That rare courage Peel pos­sessed; and though in his own day it subjected him to sneers and jibes, to bitter criticism, and to the vitriolic denunciations of Disraeli, the master of bitter speech, in the hour of his death there was none who doubted that he had acted throughout with absolute sincerity of conviction, with a majestic disregard of his own interest and his own popularity, and with a single eye to the public good.
<< Robert Peel's Administration 1841-1845 - Lord Russell's Ministry - Lord Palmerston and British Foreign Policy 1845-1851 >>