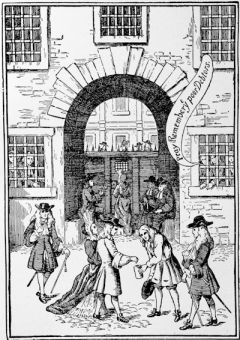 ... continued from the previous article ...
The plain fact was that at the end of 1693, William, though he very much disliked the idea of placing himself in the hands of the chiefs of one party, still saw the necessity for having on his Council a body of men who would work in harmony together, and of having the solid support of one great party in the face of the great war on the continent. Later, when the war was over, he sought to revert to the principle of taking ministers from both sides. But now he had to choose one party or the other, and the balance was definitely in favour of the Whigs.

Both Whigs and Tories as he knew, were intriguing with the Court of St. Germain; but while many of the Tories were Jacobites at heart, the Whigs intrigued mainly as an insurance against accidents; they did not want to see James back, but they wanted to secure a locus standi in case he should chance to come back. The Whigs were more definitely in favour of the war; and this was what William had most of all at heart.

The Admiral in whom the country had most confidence was a Whig. If Marlborough, who was reckoned as a Tory, had been trusted by the king, he might have counterbalanced Russell; but William knew too well that the brilliant soldier was not to be trusted. The result was that in the ministry of 1693 the only Tories retained in office were Danby and Godolphin. The changes had a beneficial effect on the temper of the House of Commons, which granted adequate supplies, and the financial reforms of the reign were crowned by the creation of the Bank of England.


The campaigning in the Netherlands in this year was uneventful. With the combatants so equally matched as they were, it was becoming more and more obvious that the victory in' the long run would fall to the side whose treasury held out longest; and the strain was already becoming too severe for Louis. A joint naval and military expedition against Brest met with disaster, attributed almost with certainty to the treachery of Marl­borough, though information of the design had reached the French from other sources as well.

The military command was given to Talmash, the only English soldier with a reputation which at that time rivalled Marl­borough's; and jealousy of Talmash is generally supposed to have been the motive of Marlborough's treachery. Talmash was killed before Brest, but Russell was despatched with a fleet to the Mediterranean where the French fleet took shelter at Toulon.

In spite of his own protests, the English admiral was ordered to winter in the Mediterranean, with the result that naval action on the part of the French was completely paralysed, and the control of the inland sea became a permanent feature of English naval policy.

Altogether, when William met parliament at the end of the year, the progress of the war was more satisfactory than at any of the earlier stages except immediately after La Hogue. King and parliament found them­selves harmoniously disposed, and William was at last persuaded to accede to the favourite demand of the Whigs, a Triennial Act, which required not only that parliament should meet at least once in three years, but that the life of a parliament should not extend beyond three years.

The Whigs gained too by the retirement of Danby, now Duke of Leeds, consequent upon charges of corruption in connection with the East India Company. The charges could not be actually proved, but, on the other hand, Danby was not able to clear himself; too much suspicion attached to him to allow of his continuing to take an active part in politics.

Queen Mary's death
Before Danby's fall William had suffered a very serious blow both politically and personally by the death of Mary. Tories who had been able to reconcile themselves to the joint rule of King James's eldest daughter and her husband found it less easy to reconcile their consciences to the solitary rule of William. She, moreover, had been personally popular.

William might inspire admiration and respect, but he had no hold on the affections of 'the English people. Moreover, he had always been able to trust the control of affairs to the queen during his own absence on the continent; there was now no one in whom he could repose a like confidence.

Again, however, it was fortunate that the campaigns of the following summer told heavily in William's favour. The value of the English control of the Mediterranean was manifested, since practically the whole of the French fleet was shut up at Toulon; and William himself, as well as the English troops with him, won a new prestige by the recapture of the important town of Namur, which the French had taken in the first year of the war.