The Reign of Henry VII 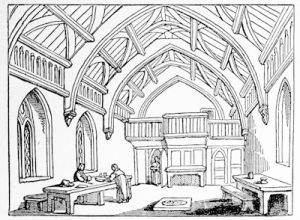 Lambert Simnel
Henry had not been long on the throne before there was an insurrection headed by Lord Lovel, who had been a partisan of Richard III. It was suppressed without difficulty. The birth of a son, Arthur, at the end of 1486, served as an incentive to the Yorkists. A youth named Lambert Simnel appeared in Ireland, claiming to be the Earl of Warwick.

Ireland was chosen because the house of York had always been popular in that country, where several of its members had been Lieutenants; and the support of the most powerful of the nobility there could be relied upon Margaret of Burgundy and John de la Pole, Earl of Lincoln, espoused the cause of the pretender; although Henry paraded the real Earl of Warwick through the streets of London to show that he was not in Ireland at all. Lincoln joined Simnel, and with a following consisting mainly of Irishmen and German mercenaries landed in England.

The rebellion was crushed at the battle of Stoke, where Lincoln was killed and Simnel was taken prisoner. Henry, however, adopted the craftily lenient policy upon which he habitually acted. He avoided blood­shed; opposition was smoothed away by his ap­parent benignity; but fines and forfeitures at once filled Henry's own treasury and crippled his enemies for further activity.

Lambert Simnel, a youth of humble birth, was relegated to appropriate service in the royal kitchens. The neutrality, if not always the active sup­port, of the greatest of the Irish nobles, Kildare, was ensured when he found his own complicity in the rebellion ignored, and himself permitted to retain the office of Deputy, that is, of acting-Lieutenant, in Ireland.

Another insurrection on behalf of the captive Warwick or of the De la Pole brothers was improbable. The years immediately following the Simnel fiasco were mainly occupied with international politics. Henry was extremely anxious to strengthen his own position by an alliance with the Spanish sovereigns, because he expected Spain to become the leading European power, while it was also one whose interests were not likely to conflict with his own. But to Spain, England was useful mainly if not entirely as a check upon France, and her value depended largely on the stability of the new dynasty, which was exceedingly dubious.

Ferdinand of Aragon and Henry of England were men of the same type; very crafty, very un­scrupulous, very proud of overreaching a neighbour in a bargain, but with a shrewd perception of exactly how far it was safe to go in trickery; while each could gauge pretty accurately the precise extent to which the other was dependent on his aid.

Neither could afford to quarrel with the other, but each wanted to get out of the other as much as he possibly could, and to give as little as he possibly could in return. During the first half of Henry's reign he was more in need of Ferdinand than Ferdinand was in need of him, and one-sided bargains were struck in favour of Spain. At a later stage, when the Tudor dynasty was thoroughly secured, the bargaining turned in favour of England so far as positive engagements were concerned; but both monarchs evinced a surprising skill and plausibility in evading their respective obligations.

Henry wanted a Spanish princess to be betrothed to his own infant son. Spain's price was the active intervention of Henry to prevent the French Crown from absorbing under its control the duchy of Brittany, which now alone of the great feudatory States was almost independent.

Henry, forced into open war with France, on behalf of the young Duchess Anne, made use of his needs to obtain generous supplies from his parliaments while he carefully shirked the expenditure either of money or of blood. The Spaniards, on the other hand, found in their contest with the Moorish kingdom of Granada a sufficient excuse for abstaining from active operations in Brittany.

Henry's own military operations were restricted to the occupation and garrisoning of sundry fortresses in Brittany, although he was careful to seek popularity for the war among his subjects by pretending to reassert the claim of his predecessors to the Crown of France. But the affair of Brittany was practically settled by the marriage of the youthful King of France, Charles VIII, to the still more youthful Duchess of Brittany.

The Peace of Etaples
Henry demanded indemnities and compensation before he would evacuate the Brittany fortresses; he made ostentatious preparations for carrying on the war on a great scale, collecting a substantial war-fund. But Charles VIII, being practically secure of Brittany, was now chiefly anxious to carry out ambitious schemes in Italy; so by the Peace of Etaples he bought Henry off at his own price—which was paid in hard cash.

The King of England did not again find it necessary to enter upon a foreign war; and the net results of the whole business were that he had filled his treasury and secured for his sagacity the respect of Spanish rulers, with whom he was henceforth able to bargain upon more equal terms.