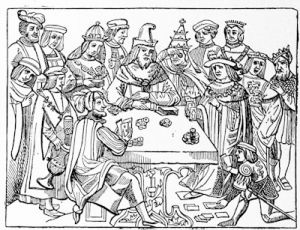 The political Game of Cards, a contemporary French satire on the European situation about 1500

But [after his accession, Henry VII] had not done with Yorkist plots. That faction, having no living candidate whom they could put forward with a reasonable chance of success, endeavoured to resuscitate a dead one.

Perkin Warbeck
According to the confession subsequently put into his mouth, he was Peter Osbeck, familiarly known as Perkin Warbeck, the son of a boatman of Tournai. He had been carefully educated to personate the murdered prince. He succeeded in obtaining recognition not only from Margaret of Burgundy, but for a time from the French Court, and afterwards still more definitely and completely from young King James IV of Scotland, who married him to a kinswoman of his own, which he would certainly not have done unless he had honestly believed that Perkin's claim was genuine.

Perkin appeared in Ireland in 1491, and of course found favour with the Yorkist nobility of that country. But there was no attempt at an immediate insurrection in his favour, and in 1492 he was received at the French Court, at the moment when Henry was threatening a great invasion. Charles, however, had no hesitation in dismissing him in order to secure the Peace of Etaples, and Perkin betook himself to Margaret in Burgundy.

There his education for the role of Richard of York was completed. There also the Yorkist plots were concocted —and were duly reported to Henry by his own secret agents. Just when they seemed to be coming to a head, the king struck down the principal conspirators in England, including Sir William Stanley, who at Bosworth had commanded the division which secured the victory to Henry.

This was at the beginning of 1495. In the summer, Warbeck was rash enough to sail from Flanders and attempt a landing in Kent, where he was very thoroughly beaten off. Then he tried Ireland, but found that the unusually capable governor, Sir Edward Poynings, had the country too well in hand; and he went off to James IV in Scotland. James's favour carried him so far that in 1496 he raided England, but still there was no rising in England on Perkin's behalf.

Then the Scots king's zeal cooled, and the adventurer again betook himself to Ireland. But the Scots raid had given Henry an excuse for raising a subsidy for national defence; and the folk of Cornwall had a strong objection to being taxed for the protection the northern counties against the Scots. The Cornishmen rose and marched up to London to demand the removal of "the king's evil counsellors." When they got to Blackheath they fell an easy prey to the Royalist troops. Large numbers of them fell in the futile battle, but the survivors were pardoned with the exception of three ringleaders.

The Cornishmen were under the unfortunate impression that this leniency was a sign of weakness on the part of the king. It was just at this moment that Perkin left Scotland for Ireland. The Cornishmen invited him to come over. He came; but the country did not rise in his favour; on the contrary, the gentry of Devon took arms for the king. Perkin deserted his followers and took sanctuary at Beaulieu, where he was soon induced to surrender.

On his usual principles, Henry put very few of the rebels to death, but accumulated a useful harvest of fines and confiscations. The pretender himself was forced to read a public confession of his imposture, and was then placed in a by no means rigid confinement. A year later he attempted to escape, and this led to his imprisonment in the Tower, where the unlucky Warwick was also shut up.

Warbeck and Simnel conspire
The two young men were allowed or induced to concoct a fresh conspiracy, or what passed for a conspiracy; when it was "detected" Perkin was hanged and Warwick was beheaded. The Yorkists had no one to fall back upon except the De la Poles, of whom the eldest was now Earl of Suffolk, and was unlikely to prove a dangerous pretender. It had become perfectly clear at last that the Tudor was impregnably established on the throne of England.