The Restoration of Charles II 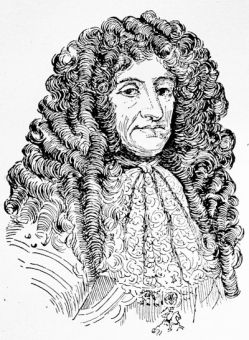 Charles II, after the engraving by Vanderbanc

Public reaction
The great bulk of the nation hailed the restoration of Charles II with delight The Protectorate had been in effect a despotism, resting upon the support not of the nation but of the army which had itself represented the sectaries. It had been detested alike by the Cavaliers, by the mass of the Presbyterians, and by the Constitutionalists, whose cause had been that of the supremacy of parliament. Through the return of the king the Cavaliers hoped to obtain restitution if not revenge.

The Presbyterians, while they knew that Anglicanism must be restored, nevertheless, counted upon the extension of complete toleration to themselves. The Constitutionalists felt assured that there would be no attempts to resuscitate the claim of the Crown to arbitrary powers which had been abolished by statute before the actual outbreak of the Civil War. Even the sectaries acquiesced in view of the promises of toleration.

No one knew the mind of the new king, nor did he intend any one to know it. Throughout his reign he succeeded in completely hoodwinking not only the nation at large but his own ministers. For him there was one consideration which controlled all others — he did not intend to go on his travels again; therefore he would not set public opinion at defiance until he had placed his own power on a footing which would secure him against all risks.

He intended to secure that power, and had no moral scruples what­ever as to methods; but it was imperative that his purpose should not be suspected, and he concealed his deep political design under a mask of reckless frivolity which at once gave free play to his own natural inclinations and disarmed suspicion.

It was the business of the Convention — so called because, not having been summoned by the royal authority, it was not in strictly technical form a parliament — to deal only with the immediate settlement of the most urgent questions. It set about its task on the lines of compromise. The lands of Cavaliers which had been sequestrated by the Commonwealth Government were restored, but the lands which had passed out of their possession by sale remained in the hands of the purchasers. An Act of Indemnity and Oblivion was passed, though it was denounced by the Cavaliers as one of indemnity for the king's enemies and oblivion for his friends.

From the general pardon regicides were formally excluded, though vindictiveness added to their number Sir Harry Vane, and went so far as to exhume the bodies of Cromwell, Ireton, and Bradshaw, the President of the High Court of Justice, in order to inflict upon them the penalties of treason.

The claims of the soldiers to arrears of pay were met, and the Army itself was disbanded, though a fanatical outbreak of the group who called themselves Fifth Monarchy men gave a warrant for the retention, in the interests of public order, of the regiments which had marched from Scotland with Monk, who were formed info the Cold­stream Guards. It was not realised at the time, unless by Charles himself, that the nuc­leus of a Standing Army was thus provided.

At the same time the great question of taxation was definitely settled, somewhat on the lines of the "Great Con­tract" proposed by Robert Cecil fifty years before. The Crown was granted a fixed revenue, conferred for life, in return for which it surrendered all the old claims for feudal dues and for the imposition of indirect taxation — direct taxation was admittedly not within the power of the Crown. The revenue thus provided, being insufficient for the purposes of administration, required to be supplemented by parliamentary grants, and thus the suspension of parliament was rendered impossible. So at least it seemed; for the parliament had not reckoned that the King of England might obtain extraneous supplies by becoming the pensioner of the King of France.

The arbitrary Courts of Justice, abolished in 1641, were dead, nor was there any attempt made to revive the claim of the Crown to the power, of arbitrary imprisonment. The whole of the settlement by the Convention Parliament was in strict accordance with the constitutional principles which had been asserted by the Long Parliament while it was still a practically unanimous body.

The convention was an English parliament. The Protectorate had incorporated the legislatures of Scotland and Ireland with that of England.

The Union Broken
The Restoration cancelled the Union; as before, Scotland and Ireland resumed their separate legislatures. They had acquiesced in the Union, not without some resentment, since in Scotland at least the incorporation was felt to be subordination, in spite of the commercial advantages accruing from the removal of commercial disabilities.

The Union had not been the out­come of a national demand in any of the three countries; it had been a piece of policy on the part of the Government in England. Scotland demanded its dissolution, and Charles was well aware that it was to his personal advantage, to the advantage of the Crown, to have three kingdoms to deal with instead of one.