Charles I and Ship Money 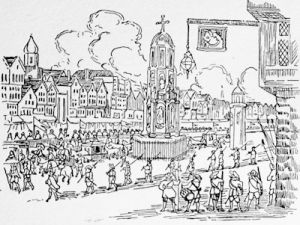 Cheapside and the Cross in 1638 from a contemporary account of the entry of Marie of Medici, mother of Henrietta Maria, Queen of Charles I into London

Archbishop Laud
Laud, who became archbishop at about the time when Wentworth went to Ireland, was bent on establishing the supremacy of his own ecclesiastical views, views which were detestable in the eyes of the whole body of Puritans. While he was Bishop of London he had been content to enforce a strict conformity throughout his own diocese, while his power was otherwise felt chiefly through the supreme influence which he exercised in the control of ecclesiastical preferments which were confined to the men of his own school.

The conventional English Puritanism was based upon what may be called the No Popery sentiment more than upon any reasoned theological convictions, and nothing was more certain to arouse popular hostility than an alarm of Popery. The conventional Puritanism had not yet assumed the garb of ascetic austerity; there had been no demonstrations when.

John Prynne was first penalised for making a violent attack upon the stage and all its works; but now when he and two other Puritans were set in the pillory for writing violent pamphlets against the Church Government, the victims of the Court of High Commission received a popular ovation. Laud's innovations or revivals had set the Puritan tide flowing.

Weston's financial devices were impolitic, mainly because they were palpable tricks which happened to touch in an irritating manner classes of the community whose goodwill the king would have done well to cultivate. Thus he had enraged the whole group of moderate landowners by dis­covering that all who had a £40 holding had been legally bound to take up knighthood at the king's coronation, and were technically liable to a heavy fine (which was now enforced) if they had neglected to do so.

But Weston's methods were strictly within the letter of the law; no one could claim that they were illegal. Now, although there was peace with France there were some alarms lest the peace should not last, and the Government became anxious to strengthen the fleet for coast defence.

Ship money
All precedent warranted the issuing of an order to the ports to provide ships, or a cash equivalent for ships, for this purpose, when war was in progress or was imminent. Ship-money, therefore, was levied on the ports in accordance with precedent. But Weston died in 1635, and the counsellors about the king's person were mere courtiers.

The king wanted more money and more ships; and an order was issued contrary to all precedent requiring inland towns to pay ship-money. There was no answer to the argument that naval defence ought to be paid for by inland towns just as much as by seaports; but there was also no answer to the other argument, that no law or precedent could be found for imposing this particular tax.

The demand was immediately challenged; the king obtained from the judges a decision in his favour, the weight of which was materially diminished by the fact that in the course of the reign three judges had been suspended or dismissed for giving decisions adverse to the king. The pronouncement however, was published all over the country, but the authority for collecting the levy was directly challenged by John Hampden, who carried the case before the Court of Exchequer. Of the twelve judges, five supported Hampden, but of the five, three did so on purely technical grounds.

Seven maintained the claim of the Crown, on the express ground that the Crown had the right to demand whatever money was required for the defence of the realm, and that it lay with the Crown to judge what money was required for that purpose. It was palpable that if that judgment held good there was no limit to the amount of money that Charles could raise on the pretext that it was required for the defence of the realm. Yet the nation could only rage in silence; it had no mouthpiece, for it had no parliament. But we must turn now to those complications in the northern kingdom of Scotland which at last drove Charles once more to summon an English parliament.