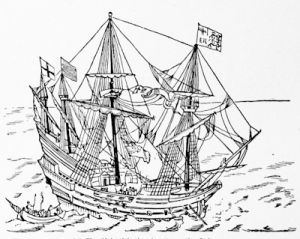 An English ship in the Armada fight, from a contemporary engraving of one of the tapestries in the old House of Lords

[Ed. See our main history section for a more concise overview of the Spanish Armada]

By the death of Mary [Queen of Scots] in February 1587 the situation was changed once more. The Romanists were without a candidate of their own faith who had any plausible title to the succession. The King of Scots was a Protestant; the family of the Earl of Hertford, who had married Catherine Grey, were Protestants.

But Philip of Spain, like the Guises, had adopted the doctrine that heresy was itself a bar to royalty. Of the few English Romanist nobles who claimed a Plantagenet ancestry, none would become a candidate for the crown. But Philip himself, through both father and mother, was descended from daughters of John of Gaunt. Moreover Mary, having very naturally quarrelled with her son, who was not distinguished for filial piety — after all he was Darnley's son as well as Mary's — had chosen on her own account to declare Philip her heir.

Philip's claim
On this decidedly flimsy basis Philip put forth his own claim not only to succeed Elizabeth, but to supplant the heretic queen on the throne of England; a claim which he transferred from himself to his daughter the Infanta Isabella. Nothing could have been more admirably calculated to ensure that wavering Romanists should choose patriotism in disregard of their allegiance to the papacy, since they were forced to make choice between the two.

A popular error attributes to Elizabeth a magnanimous superiority to religious differences, and confidence in the loyalty of her Romanist subjects, because she chose the "Romanist" Lord Howard of Effingham to be admiral of the fleet in the great contest. Unfortunately, it is perfectly clear that Howard was not a Romanist at all. The English Catholics acted with a loyalty most honourable to them, but without any encouragement from the government.

From the moment of Mary Stuart's death, however, it was manifest that a life and death struggle, between England and Spain could not be deferred. Philip departed from his patient determination to grind the United Provinces into complete submission before extinguishing the power of England. His ports were filled with preparations for a mighty armada.

Drake takes the offensive
The able Spanish admiral Santa Cruz was to be in command — so far as any servant of Philip II could regard himself as in command, for Philip trusted no man. But Drake did not wait for the Armada. As in 1586, so now, he sailed with a squadron to take the offensive, having slipped out of port in time to escape the counter-orders which he very accurately anticipated from the queen. He sailed to the great harbour of Cadiz, where he destroyed a vast quantity of shipping, completely spoiling the Armada's chance of sailing before the winter; and then, failing to entice the main Spanish fleet out of the Tagus, contented himself with capturing a great Spanish treasure-ship, and so returned home.

Philip's plan
It was Philip's intention to despatch an invincible fleet which would sail up the Channel, take on board from the Netherlands Parma's veteran regiments, and proceed to the conquest of England. But Drake's operations of necessity postponed the sailing till the late autumn, and, when the late autumn came, Santa Cruz pronounced that winter storms would paralyse naval operations, even if they did not break up his fleet.

With the new year Philip resolved to ignore his admiral's objections; but Santa Cruz's own death again necessitated postponement, and by this time the English fleet was in full fighting trim.

During the whole year past Elizabeth had been pursuing her own exasperating policy of intriguing with Parma on the basis of proposals for the betrayal of the Dutch, filling her own ministers and sailors with acute apprehension and disgust. Yet it may be that she was only playing for time, since when the crucial point in the negotiations was reached, she declared that she could not think of surrender­ing the cautionary towns which she held until full effect had been given to her own requirements; whereas the surrender of the cautionary towns was from the Spanish point of view the necessary first step in the whole business.

Every one appears to have believed that Elizabeth's negotiations were serious; her ministers could only hope that they might be frustrated either by some fortunate accident or by Elizabeth's recovery of her moral equilibrium; and as a matter of fact she extricated herself from the apparent impasse precisely as she had done half-a-dozen times before in similar cases. Philip, it may be remarked, went on patiently and laboriously as ever with his preparations, as though no negotiations had been in progress.

When the Armada was all over, English piety attributed its defeat to the special interposition of Providence on behalf of the Protestant faith. "Dominus flavit el dissipati sunt," "the Lord blew and they were scattered." As a matter of fact, they were not scattered by tempests until they were thoroughly shattered and beaten by superior tactics, superior gunnery, superior seamanship, and superior naval construction. There was never a shadow of a doubt in the minds of the English seamen that, if they were allowed a fair chance, Philip's Armada would prove his ruin.

If Drake had been given his way, the Armada would never have sailed at all, because it would have been sunk or burnt in detail in the Spanish ports or at least in Spanish waters. The alarms of the landsmen detained the English fleet in the narrow seas, and so the Armada had to be fought in force when it did come; and even then, what surprised the seamen was not their ultimate success in destroying it, but the unexpected capacity for resistance which it displayed.

The men on board the English ships were nearly all sailors, who were working the ships themselves as fighting machines; while half the men on the Spanish ships were soldiers who were of no use at all until the ships grappled, whereas the English never grappled until the enemy was already disabled. In plain terms, the end of the Armada was practically a foregone conclusion from the outset.

The English made one grave miscalculation, which alone saved the Armada from total annihilation at their hands. They had not reckoned upon the enormous and wholly unprecedented expenditure of ammunition, of which the supplies ran short in both fleets, with the result that the English had to give up the pursuit when the Spaniards were already in helpless and headlong flight.

The Royal Navy
The nucleus of the English fleet was the small but exceedingly efficient royal navy; the majority of the vessels were privately owned or furnished by the seaports. The whole was under the general command of Lord Howard of Effingham, with Drake, Frobisher, and Hawkins as subordi­nates; while Drake was the real head. The major part of the fleet was collected at Plymouth, while a squadron commanded by Wynter watched the Dutch ports to prevent any possibility of a surprise movement from that quarter.

The Armada arrives
On July 19th the Armada was sighted off the Lizard, the ships massed in the form of a crescent. The English fleet had time to work out of Plymouth Sound, cross the front of the approaching foe, and lie to windward of the enemy's course so as to be able to attack or hold off at will. The Span­iards sailed in line abreast with a wide­spread front; the Eng­lish attacked sailing in line ahead, that is to say in single file, ship follow­ing ship, passing the Spaniards and pouring in broadsides as they passed; while the Span­iards endeavoured to dis­able them by ineffective firing at their rigging.

As the great fleet moved up Channel no attempt was at first made to bring on a general engagement, but stragglers were cut off and an occasional Span­iard was disabled. On the fourth day there was a sharper engagement off Portland, and another on the sixth day off the Isle of Wight. So far the Spaniards had kept their formation and actually lost very few ships, but the fight off Portsmouth prevented their apparent design of securing a station in the Channel, and they proceeded to Calais.

The fireships
As they lay there on the ninth night, the English, now reinforced by Wynter's squadron, floated fire-ships down upon them before a favouring breeze. The Spaniards were seized with panic, cut their cables and made for the open sea. In the morning they were scattered far and wide.

Gravelines
Off Gravelines the English fell upon them and destroyed them in detail. A fierce squall forced the English ships to draw off, and by the time it was over the Spaniards had begun their headlong flight up the North Sea. On the third day after Gravelines the pursuit ceased, partly from lack of ammunition, partly from the supposed necessity of guarding the Channel in force in case Parma should still attempt an invasion.

Of the fleet which escaped from the English shattered and crippled, one half was lost on the Scottish or Irish coasts, or foundered at sea. Only a battered and ruined remnant struggled home. In the whole series of engagements the English had lost one ship and less than a hundred men.