The Death of Mary, Queen of Scots

Navigate 'A History of the British Nation'
<< Elizabeth I and England in the Low Country - Death of Mary, Queen of Scots - The Spanish Armada >> 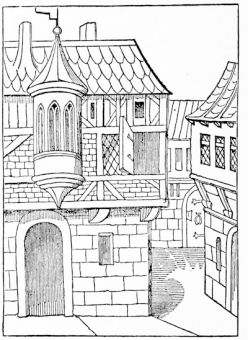 Meanwhile [in 1586] events in England had been moving towards the consumation of the tragedy of Mary Stuart. Through the long years of her captivity, voluntarily or involuntarily, she had provided a focus for eternal plots and intrigues. Nearly all England believed that she had murdered Darnley to gratify her passion for Bothwell. Nearly all England believed that she was actively engaged in plotting for the assassination of Elizabeth and her own elevation to the throne.

All England, with the exception of the extreme Catholics, viewed the possibility of her accession, whether as the result of conspiracy or in the natural course of events as the legitimate heir, with the gravest apprehension; and very nearly all England would at any time have learnt with relief that she was dead, or would have welcomed her execution. But Elizabeth had stood in the way of the national feeling.

In the first place, Mary, living, however dangerous, was a valuable diplomatic asset by means of which Scotland, if it turned restive, could always be coerced. In the second place, the sanctity of crowned heads was a cardinal article of the English queen's creed. The last thing she wished was to find herself compelled to sanction Mary's execution; and whatever conspiracies were detected, she resisted all pressure to proceed against Mary herself in respect of them.

Ever since 1568, Mary had been kept in strict confinement in the charge of gaolers who could be trusted to show her no superfluous kindness; permitted the minimum of intercourse with the outside world, and perpetually conscious that her life would be forfeited so soon as the Queen of England might deem it to be in her own interest to strike.

Now the declaration of war between England and Spain changed the situation. Of necessity it made Spain the open instead of only the secret champion of Mary's cause. There was nothing to be feared from Scotland, where the attempt to create a Romanist reaction had failed absolutely. In France, nothing Elizabeth could do would increase the hostility of the Guises.

The uses of Mary as a captive were over, while every argument for her removal had gathered rather than lost force. Elizabeth yielded to the pressure from Burleigh and Walsingham, which had behind it the whole weight of English public opinion, and Walsingham found himself free to adopt measures which should incriminate Mary - in charges of compassing the queen's death.

The Babington Conspiracy
Mary was removed to Chartley Manor, and was placed in charge of custodians officially less rigid than those who had hitherto been re­sponsible for her. Walsingham was satisfied that, with increased facilities for outside communication, the captive queen and her supporters would commit some indiscretion which would place her in his power.

His expectation was fully warranted. A plot of the usual kind was set on foot, in which the leading part, which included the assassination of Eliza­beth, was assigned to a young enthusiast named Anthony Babington. The conspirators found it almost unexpectedly easy to open communications with Chartley Manor — one of the most active and apparently most zealous of their number being a traitor in Walsingham's pay.

Correspondence passed in and out of Chartley Manor, but each letter passed en route through the hand of an agent of Walsingham, who took a copy of it before allowing it to proceed to its destination. But no one could condemn Mary for being privy to a plot for her own liberation, seeing that there was no kind of legal authority for her detention.

It was some time before Walsingham's agent could produce a letter conclusively associating Mary with the plot as one for the assassination of Elizabeth. But with that letter in his hands Walsingham had all he wanted. The conspirators were arrested, tried, condemned, and a Commission was appointed for the trial of Mary herself.

The deadly letter
Once again the decisive evidence against Mary was contained in a single letter. Without one particular letter of the Casket group, the positive evidence of her guilt in the Kirk o' Field affair broke down. Without one particular letter, the positive evidence of her guilt in connection with the Babington Conspiracy broke down; that is, there was no warrant for charging her with having actually given her sanction to assassination.

In both cases the genuineness of the decisive document has been assailed. In neither case is it reasonably possible to maintain that the document was forged from beginning to end; in both it is possible to believe that the damning passages were forged interpolations. But in the one case the difficulties of forgery were enormous, in the other they were small. Mary's denials may have been worthless, but they were explicit and not incompatible with the rest of the evidence.

Was it a forgery?
Walsingham's answer to Mary's challenge was not explicit, "As I bear the place of a public person I have done nothing unworthy my place." There the matter stands and will stand till the Day of Judgment.

No human being will ever know whether the technical evidence on which Mary was condemned to death was her genuine writing or a forgery. But of two things there can be no manner of doubt. Mary would have sanctioned and would have profited by Elizabeth's assassination without a qualm.

Walsingham would have found some technical excuse for the destruction of the queen whose life, in common with three-fourths of the country, he regarded as an intolerable menace to the state. Whether he really discovered or invented it is a minor matter. Whether Mary was morally justified by Elizabeth's treatment in accepting any possible means for her own liberation is beside the question. No person in Mary's position in Mary's day would have refused on moral grounds to countenance Babington's plot; and no government in Europe would have hesitated to remove a person who was in Mary's position.

The Execution of Mary, Queen of Scots
Mary was pronounced guilty, but her sentence was referred to parliament and the queen. Parliament forthwith demanded her execution. Still Elizabeth hesitated. Possibly she had qualms of conscience, certainly she shrank from the idea of slaying a crowned queen, and feared the tongues of men. She tried to shift the responsibility. She hinted to Mary's custodians that they should relieve her of it by taking the law into their own hands — to their extreme indignation.

But at last she was induced to sign the warrant for Mary's death, which was brought before her by the Secretary Davison. The Council acted without a moment's delay, fearing that the warrant would be revoked. Royal to the last, never more royal than in the hour of her death, Mary Stuart ended her long captivity. Whatever the faults or follies of the House of Stuart, its sons and daughters, with rare exceptions, have at least known how to die.

<< Elizabeth I and England in the Low Country - Death of Mary, Queen of Scots - The Spanish Armada >>