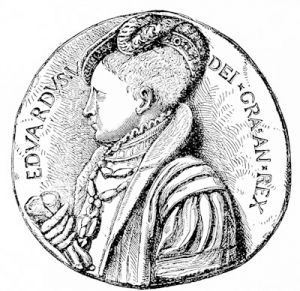 A portrait medal of Edward VI, 1547, in the British Museum

Surrey’s conduct was probably responsible for the fact that the Howards and Gardiner were not finally on the Council of Executors to whom Henry left the management of the realm. The whole strength lay with the progressive section, headed by the Earl of Hertford, the young king's uncle. Brief but energetic intriguing procured for Hertford the office of Protector of the Realm, while the Council distributed honours and peerages among themselves. The Protector became Duke of Somerset, the name by which he is best known.

Somerset was a man of intellectual tastes and many admirable ideals, combined with a quite exceptional incapacity for adapting means to ends. What he wanted was usually right; the way he set about trying to get it was invariably wrong. He wanted a union with "Scotland. He wanted what hardly any one else dreamed of, a wide religious toleration. He wanted an advance beyond Henry's position, by the admission of doctrinal innovations such as Cranmer had unsuccessfully striven for during the last reign. He wanted to remedy agricultural depression and the evils of vagrancy. But in almost every case the methods he adopted tended to defeat his own ends.

The immediate problem was that of Scotland, where the Anglophile party, the party of the Reformation, had just achieved the assassination of Cardinal Beaton. He had his choice between giving an active support to that party, which would have secured him in return their adhesion to his own policy of marrying the little Queen of Scots to the young King of England; and, on the other hand, of leaving Mary of Lorraine's government to win by French help, and relying upon the inevitable reaction against French influence to give him his opportunity at a more convenient season.

He could have followed the second line without alienating the Scottish re­formers. The course he adopted was that of allowing the regent Arran and the queen dowager to triumph by French assistance, and then intervening to compel Scotland at the sword's point to accept his marriage policy. He marched into Scotland, thereby uniting the entire nation against him.

Pinkie Cleugh
At Pinkie Cleugh, near Edinburgh, he inflicted a tremendous and bloody defeat upon the Scots, then sacked Edinburgh, ravaged the country, and retired. He had made no preparations for garrisoning the south, and the practical effect of Pinkie was to draw closer the bond between Scotland and France; whither the little queen was sent, to be brought up at the French court, betrothed to the French dauphin, and ultimately married to him.

Somerset had successfully destroyed an anglicising party in Scotland by explicitly reasserting the English claim of sovereignty. He had, however, achieved a military glory which won him popularity in England and increased his already overweening self-confidence.

Church reform
Meanwhile the Council, within which the advanced party had practically silenced opposition, was moving to­wards the adoption of re­formed doctrines. Even Henry had gone some way in sanctioning the abolition of notoriously gross abuses in the current religious practices, including the destruction of what were called 'abused images."

The term was now practically extended to include almost anything which might conceivably lose its merely symbolical meaning and be transformed by superstition into an actual object of worship; and a crusade against such images was carried on which degenerated into wanton violence and irreverence. The injunctions issued were resisted by Gardiner, and by Bonner, Bishop of London, as being notoriously opposed to the wishes of the dead king, which the Council was bound to observe until Edward VI should come of age and formulate his own policy. The remonstrances of the two bishops were answered by their confinement in the Fleet prison.

Somerset's return
When the victorious Somerset returned from Scotland, parliament met. The Protector's paternal benevolence was demonstrated by the repeal of a series of the harshest statutes of the preceding reign - the Treasons Act, the Six Articles Act, and with them the old Acts against the Lollards. On the other hand, some, of the religious foundations which Henry had omitted to suppress were now absorbed in spite of the opposition of even the reforming bishops.

In answer to the petition of Convocation itself, parliament sanctioned the marriage of the clergy, and the administration of the cup to the laity in the Sacrament of Holy Communion, both of which had been expressly prohibited by the Six Articles. Further, a general pardon set the two recalcitrant bishops again at liberty.