Thomas Cromwell and the Dissolution of the Monasteries 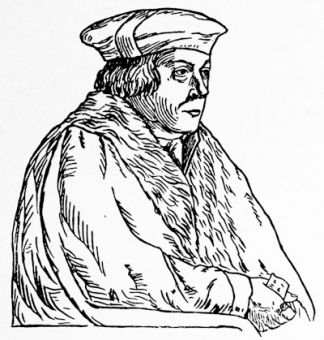 When parliament again assembled in the following year, 1534, it proceeded to re-enact the recent anti-papal statutes and to abolish the one remaining tribute to Rome, known as Peter's Pence. Also it gave the "submission of the clergy" statutory form and secured to the king what is called the conge d'elire, whereby the Crown nominates to all the higher ecclesiastical appointments and. the chapters are graciously permitted to elect the Crown's nominees. Further, it passed an Act of Succession fixing the succession on the offspring of Anne Boleyn, who in the previous September had become the mother of Princess Elizabeth.

The voiding of Katharine's marriage ipso facto stamped the Princess Mary as illegitimate. The Act authorised the exaction of an oath of obedience, which commissioners were appointed to present. The form of the oath involved the acknowledgment that the marriage had been invalid, as well as acceptance of the rule of succession.

Sir Thomas More recognised the parliamentary right to fix the succession, but refused to admit that the marriage had been void. Bishop Fisher of Rochester took the same line, and both were sent to the Tower.

Henry and Thomas Cromwell were both exceedingly alive to the necessity of obtaining every possible pronouncement in favour of their position, because the divorce had been extremely unpopular. It was just at this time that the pope's final rejoinder was received, and was answered by a declaration of Convocation that "the Bishop of Rome has in England no greater jurisdiction than any other foreign bishop."

The Treasons Act
Not ostensibly anti-papal or anti-clerical was the Treasons Act passed by the same parliament in the same year. Cromwell was in fact planning through constitutional forms, to make the English monarchy a despotism. Such division of authority between the spiritual and temporal powers as had previously existed was already wiped out; the whole power was concentrated in the State, and the ecclesiastical supremacy was vested in the Crown.

The Treasons Act was a new weapon for striking down all resistance. Treason had hitherto been, in theory at least, a matter of overt acts. The new statute made treason of words, and even of silence, which were capable of bearing a treasonable interpretation. Thenceforth if a charge of treason were brought it would be all but impossible to resist it, since it was the standing rule of the law to require not proof of guilt but proof of innocence.

The fall of More and Fisher
More and Fisher, maintaining their refusal to take the oath of supremacy in the prescribed form, were both beheaded for treason in the summer of 1535. The heads of certain monastic establishments which followed the lead given by More and Fisher were also put to death, and their houses suppressed. Thomas Cromwell's reign of terror under colour of the law was openly initiated when he struck down the two most admired Englishmen of the day, and crushed those religious houses which enjoyed and deserved the highest reputation in the country.

It was in this year that Cromwell appeared unmistakably as the brain which directed and the hand which executed the king's policy. He was appointed Vicar-General; in other words, the king delegated to him his own authority as supreme head of the Church. At the same time he became the king's foreign minister, so far as such a term could be applied, although his control of foreign policy was much less complete than Wolsey's had been.

It was his primary aim in this field to unite England with the Lutheran princes, as Cranmer desired a religious union with the reformers; but both were held in check and in effect frustrated by the orthodoxy of the king, who was antagonistic to all theological innovations unless he recognised in them some political necessity which he could translate for himself into terms of conscience; a process which never presented any difficulty to him. Cromwell never succeeded in associating England with the Protestant League, and finally lost his head when his anxiety in that cause led him to cross his master's matrimonial tastes.

The minister had tried to make the king a despot through constitutional forms and with popular support. But the first condition of a despotism in England was the provision of a full treasury which should make the Crown independent of voluntary supplies. Royal extravagance had thoroughly exhausted the mighty stores accumulated by Henry VII, and a new source of supply was needed. Cromwell found it in the immense wealth of the Church, as Henry VII had found it in the wealth of the baronage.

Visitation of the Monasteries
That wealth had always excited popular jealousy, but some decent excuse had to be found for confiscation. Cromwell as vicar-general instituted a visitation of the monasteries. His commissioners spent three months in their investigations, collecting but hardly sifting all the evidence which told against the monastic establishments, and not troubling themselves about the evidence in their favour.

Conclusion of the visitations
The result was that they were able to present Cromwell with a portentous report condemning a number of the small establishments as hotbeds of vice, and many of the larger houses as seriously lacking in discipline and requiring stringent supervision. On this basis a bill was presented to parliament, and cheerfully accepted, which condemned the smaller houses en bloc, though about eight per cent were excepted from the condemnation.

Smaller monasteries suppressed
From what remains of the evidence, there can be little doubt that a fair and full enquiry would have quite warranted the suppression, but the enquiry was neither fair nor full, and the picture actually presented, lurid and appalling, was indubitably a gross exaggeration of the facts. The revenues were confiscated, though some compensation was granted; and the vicar-general issued, for the regulation of the greater houses which were as yet untouched, injunctions, of which it can only be said that they must have been intended to make the monastic life intoler­able and to drive the monasteries to a voluntary self-suppression.