The Final Suppression of the Monasteries 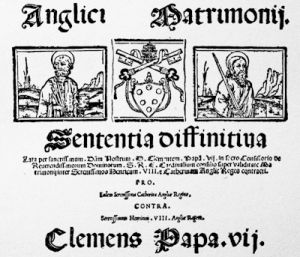 In all this [legislation to suppress the monasteries] there was no attack on religious doctrine, a subject on which men's minds were much engaged. An undercurrent of Lollardry had always survived official hostility. In Germany and in Switzerland doctrines were challenged which the Church had taught for centuries. Whither should men look for direction?

The Ten Articles
The preparation of an official translation of the Bible into English had been authorised; but it was time for some sort of official pronouncement on the dogmas which were being called in question. This was provided in 1536 by the issue of the Ten Articles "for stablising Christian quietness," drawn up nominally by the king himself and sanctioned both by parliament and by convocation. The Ten Articles admitted no innovations in doctrine, but drew a distinction between practices which were necessary and essential, and those which were "convenient," that is, required by public policy only.

But the Articles did not "establish Christian quietness." The disturb­ance and alarm created in the people's minds by the whole course of recent events could not be stilled by a mere declaration in favour of orthodoxy. In the north especially the dispersed monks found sympathetic-listeners. The monasteries had been popular landlords, and the poorest classes of the community owed much to them as the only professionally charitable institutions in the country. An insurrection broke out in Lincolnshire which was sharply suppressed, but was followed by the much more alarming rising known as the Pilgrimage of Grace.

Pilgrimage of Grace
The leadership of the movement was laid upon Robert Aske, a lawyer of good family. By him it was organised with consummate ability; a great force was rapidly raised and held under an admirable discipline. But it was Aske's one desire to insist that the agitation was absolutely constitutional, absolutely loyal, and directed only against intolerable innovations and against the "evil counsellors - that is, Cromwell and the advanced bishops, such as Cranmer and Latimer who were "destroying rellgion".

All over the north Aske and his followers were welcomed and applauded. If they had marched upon London, it is not impossible that the whole country would have risen in their support. But when they came to the river Don they were met by the Duke of Norfolk at the head of a small force. Aske wished to avoid bloodshed; Norfolk opened negotiations, and the insurgent leaders were tricked into a belief that their demands had been conceded. The government was merely playing for time, intriguing with the northern gentry, and secretly bringing up forces.

The deluded insurgents dispersed, and then began to realise how they had been deceived. Against the will of Aske, some of the more headstrong spirits rose in arms and appealed to violence. But the government now held the military control, seized the excuse to cancel the pardon which had been granted, and smote the insurgents with a heavy hand — not only those who were responsible for the new disturbance, but those who had taken part in the original rising. Aske and others of the leaders were executed, and the same fate befell the heads of sundry abbeys and priories who were held to have been implicated.

Matthew's Bible
A new formulary of faith was issued, commonly known as the Bishops' Book, and the English version of the Scriptures known as Matthew's Bible was officially authorised. But the real use of the rising to Thomas Cromwell was the opportunity which it gave him to employ charges of treasonable complicity for a further suppression of the monastic establishments in the north.

The fall of Anne Boleyn
Meanwhile other events of importance had been occur­ring. Anne Boleyn, like her predecessor on the throne, presented her husband with one daughter, and a second child which died immediately. The king tired of her, and fixed his favours on a lady-in-waiting, Jane Seymour, who was not to be tempted by illicit advances. Anne was unpopular, flighty, and exceedingly unguarded in her actions, besides being singularly tactless. Charges were brought against her of gross immorality; they were proved to the satisfaction of a court constituted with an eye to the appearance of strict impartiality.

Anne condemned
It could be confidently asserted both of Henry and of Cromwell that they never brought any one to trial unless they felt secure of a conviction, whether they relied for that conviction on evidence or upon other motives in the judges. Anne was condemned; an ecclesiastical court was somehow convinced that some prenuptial proceedings either on her part or on Henry's made her marriage to him void, and pronounced accordingly.

Anne was executed, and the king was left with a second illegitimate daughter. Such was the grotesque outcome of those divorce proceedings which Henry's apologists justify on the ground that a male heir to the throne was a political necessity.

Queen Jane Seymour
Queen Katharine was already dead. The day after Anne was beheaded, Henry married Jane Seymour. A year later she bore him a son who was beyond all cavil the legitimate heir to the throne. Having thus done her duty, she was fortunate enough to die; and the king realised with some reluctance that it was still advisable to multiply his legitimate offspring, especially as the infant was sickly.

For two years to come, various projects were proposed for a political marriage; which culminated in Cromwell's selection of Anne of Cleves, the Duke of Cleves being associated with the German League of Protestant Princes, though not actually a member thereof.

Meanwhile Cromwell had been turning his attention in another direction. The country was restive under the ecclesiastical policy, and there was a possibility that the insurrectionary spirit might resort in desperation to an attempt at restoring a Yorkist dynasty, Margaret, Countess of Salisbury, the sister of the unlucky Earl of Warwick, had been married by Henry VII to a knight named Pole, who, it should be noted, had nothing whatever to do with the family of De la Pole. Her eldest son was known as Lord Montague, and her younger son, Reginald, afterwards famous as Cardinal Pole, was already prominent in the ecclesiastical world on the Continent.

The Exeter Conspiracy
One of Edward IV's daughters had been married to Sir William Courtenay, and her son was Marquis of Exeter. Exeter and Montague were on terms of intimate friendship. Hence it is not surprising that Cromwell discovered a conspiracy. The country was sown with his spies, and he had no sort of difficulty in procuring what passed for evidence of verbal treason when­ever it suited his own convenience. Exeter and Montague were executed at the end of 1538. The old Countess of Salisbury was spared for the moment, but only for the moment.

The final dissolution of the monasteries
The Exeter conspiracy gave Cromwell his final opportunity. An Act was introduced for the entire suppression of the monasteries in view of the manifest complicity in treason of which some had been guilty, their general failure to satisfy the disciplinary ideals of the vicar-general, and the common absence of any sufficient reason for their continued existence.

Bargain basement prices
Perhaps the most astonishing thing about the great spoliation of the Church was the recklessness with which the confiscated wealth was squandered. A fraction of the proceeds was appropriated to educational purposes, and a larger fraction to the defences of the southern seaboard. But the great bulk of the estates were given away or sold at low prices, in many cases to persons of burgess extraction who were eager to become enrolled among the landed gentry.

A large new class of country gentry was thus created, which in the second and third generations was to become a factor of considerable political importance. Meanwhile the prominent fact was that for the old monastic landlords was substituted a new race in whom the com­mercial instinct was highly developed, men who were determined to make the most of their acquisitions, untrammelled by any sentimental consideration.

Royal Proclamations Act
The final suppression of the monasteries was the coping-stone of Cromwell's ecclesiastical policy; that of his constitutional policy was the Royal Proclamations Act, by which parliament conferred the force of law upon royal proclamations issued with the assent of the Privy Council. Aa the Privy Council had long ago been transformed into an instrument of the Crown, to all intents and purposes the Crown now had complete control both of administration and of legislation, though it still remained without authority to impose taxation.

The king was also given authority to fix the course of the succession by will. Cromwell in 1539 was still supreme; yet he had warning that the opposition to him personally was still powerful. He could not afford to identify himself too closely with the school of advanced reformers. This was sufficiently demonstrated by a victory of the opposite party when the Act of the Six Articles was passed, very emphatically re-asserting six ecclesi­astical doctrines which were impugned by all schools of Protestants.

Mani­festly at great risk to themselves, Cranmer and others of the advanced bishops offered a strenuous resistance to the measure, though they held themselves bound to obey the statute when it became law. The victory was perhaps not so decisive as it seemed; for although the penalties imposed by the Act were of a most merciless character, Henry very decidedly dis­countenanced any attempt at its extensive application.

Cromwell's fall
But, as a matter of fact, Cromwell had already finished the work for which the king wanted him. His fate, like Wolsey's, was sealed by a royal marriage question. His representations induced Henry to fix upon Anne of Cleves as his fourth wife; there was apparent danger that the Emperor and the King of France were on the verge of making up their quarrels, an event which might bring trouble upon England, and gave the Lutheran alliance a new desirability.

But when Anne arrived in England, she was found to be quite without those charms of person which she had been represented as possessing. Henry was disgusted with her and still more annoyed with his minister. So he had no sooner married the lady than he discovered a pre-contract which provided a sufficient excuse for nullifying the marriage. Precisely at this moment there came a renewed rupture between Francis and Charles.

Henry felt that he had been doubly duped, and he turned upon Cromwell. The mighty minister, the most dreaded, perhaps, who had ever held sway in England, was suddenly arrested at the council table, attainted under the Treasons Act, and sent to the block.


He was one of the prime movers of the English Reformation

He was executed when Queen Mary came to the throne