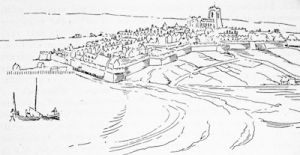 Londonderry about 1680, from a contemporary drawing in the British Museum

In England, and, as we shall presently see, in Scotland, the strength of Protestantism ensured the rule of William and Mary against anything like a national insurrection. Nothing of the kind was attempted in the one country in the other, though Dundee raised the standard of King James, it was with the knowledge that the Jacobite cause could not succeed with­out reinforcements, and when Dundee himself fell in battle the victory of the government was assured. With Ireland, however, the case was very different. There the great bulk of the population was Roman Catholic.

That population had its particular grievances, besides the general grievance of subjection to England; but it had every reason to favour a Stuart regime with its promise of a Catholic ascendency, in preference to that of a government pledged to Protestant principles and the repression of Romanists.

In Ireland, then, while there was no particular sentiment of loyalty to the House of Stuart, personal interest drew the majority of the population to favour the Jacobite cause. In Ireland, moreover, the rule of Tyrconnell under James II had in effect transferred political power to the Romanists.

In Ireland, as in England, the corporations had been manipulated, but in Ireland there was no Test Act to preserve their Protestantism. And for Ireland the restoration of James would mean a revolution and the upsetting of the Land Settlement, made on the restoration of Charles, which had kept the proprietorship of the soil in the hands of the Protestant minority. Now, England had not forgotten the Irish insurrection of 1641, nor the fears of an Irish army being employed for the coercion of England when Strafford was Deputy.

James looked to Ireland as the base from which he would be able to recover the crown of England. But to William that country appeared to be of minor importance; he had no inclination to withdraw troops from England to serve in Ireland, especially as Tyrconnell, who had the whole Irish administration in his own hands, appeared willing to negotiate.

The king sent over Tyrconnell's brother-in-law to arrange terms, but the agent promptly associated himself with the Earl, who, after a very brief delay, threw off the mask. The Protestant settlers outside Ulster were quickly overpowered, and, in Ulster, were swept into Londonderry and Enniskillen.

James lands in Ireland
Before the end of March, 1689, James himself had landed at Cork without any attempt having been made to obstruct his passage, and proceeded to Dublin, where he summoned a parliament. The action of that parliament showed the use which the long depressed majority intended to make of the advantage which they believed themselves to have won. Their declaration in favour of James was a matter of course; so was their announcement of toleration for all religions.

Next came a series of acts oversetting the claims of the English parliament and English authorities to override the parliament of Ireland. Landowners were in future to pay the tithe to their own Church; but, as the overturning of the Land Settlement practically displaced all Protestant landowners in favour of Catholics, this meant that the tithe would go to the Roman Catholic clergy, who were no longer to be barred from holding ecclesiastical appointments.

Estates restored
But the most subversive measures referred to the land. All forfeitures and settlements since 1641 were cancelled; the land was to be restored in possession to the representatives of those who had possessed it at that date. The lands of persons now in "rebellion" against James II were to be appropriated to the Crown, and from them compensation was to be provided for those persons who had bought land since the Settlement and were displaced by the restoration of such land to its former owners.

Property forfeited
How the land of these rebels could be at the same time appropriated to the Crown and restored to the original owners the legislators did not pause to inquire. Parliament went on to pass an Act of Attainder containing the names of some sixty peers and more than two thousand commoners. Their property was forfeited, but they were to have the opportunity of taking their trial, and recovering it if they proved themselves innocent. The amazing proceedings of this parliament may perhaps account for the extreme vindictiveness displayed when a Protestant' parliament recovered the mastery.