When the Romans invaded Britain in the first century AD they made little attempt to adapt their architecture to the traditions of their new Roman province of Britannia. Rather, they imposed their own Mediterranean style of architecture and town planning. One of the most visible remnants of that style in England is the Roman villa. 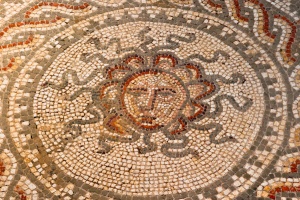 In Latin the word villa means simply, "farm", so technically villas were any form of rural agricultural dwelling built in a Roman style. In practice, though, when we speak of villas we mean the country estates of the Romanised British elite. Although at first the conquered tribal aristocracy may have been drawn into towns, it wasn't long before they began a "back to the land" movement.

Most large villas are built quite close to major urban centres, generally within ten miles, so the owners were never very far from the centre of affairs. Villas were more than fancy houses, though; they were centres of rural industry and agriculture.

In one complex they could hold the landowner and his family, overseers, labourers, storehouses, and industrial buildings. Although some may have been strictly the centre of large farms, others included industry in the form of pottery and metalworking.

Although villas are not unknown in the north of England, by far the largest number were constructed in the fertile lowlands of the south east, particularly in Kent and Sussex.

Roman building falls into two major eras; immediately post-conquest most houses and public buildings were built in timber on stone or wooden foundations, and in the 2nd century were rebuilt in stone.

Individual houses were as different then as they are now, but the villas followed some general patterns. Most were one story in height, based on a stone foundation, and capped with slate or clay tiled roofs. These villas also boasted some creature comforts which would not be common to England again for over a thousand years after the end of the Roman era. Mosaic or marbled floors, painted plaster walls, and central heating were not unknown, especially in those villas owned by government officials.

Underfloor heating systems were universal, fed by a separate fire chamber which funnelled hot air through stone channels under the building. One wonders how much some of the British aristocrats understood the new Roman styles they were adopting, for in one intriguing case the heating system was never fired up.

Tile floors were common, and most larger villas contained at least one room with a mosaic floor. Walls may have been decorated with mosaics or painted scenes. Roman furniture was made of wood, in patterns similar to Roman style throughout the Empire. Many villas also had separate bath houses.

Floor plans fell into three main categories, the corridor, courtyard, and basilica styles. These styles were occasionally mixed together in the same building. The corridor style is pretty basic architecture; just a long passage with rooms opening off it. [Note: this floor plan drawing and the two that follow are grossly simplified].

By the fourth century, the corridor sprouted wings and finally enclosed a central space to become a courtyard house. Although reminiscent of Mediterranean houses arranged around a central atrium, these courtyard villas were actually little more than a three or four-sided group of corridors with adjoining rooms.

The basilica, or aisled hall, (also called "barn style") is similar to both earlier Iron Age and later Saxon halls. The hall is a rectangular building, with two rows of interior posts along the length, creating a central nave while leaving space along each long wall.

The golden age of the villa in England was in the 2nd and 3rd centuries. After that, they fell into disuse or were taken over for other purposes.

Major Villas to visit in England:
Bignor Roman Villa
Bignor, 7 m N Arundel, West Sussex, off the A29
In its heyday, Bignor took in 70 buildings over 4 acres. Today, the site museum preserves some of the best mosaics in England. From Bignor, you can trace the route of Stane Street, the great Roman road linking Chichester with London.

Chedworth
Yanworth, near Cheltenham, Gloucestershire, on A429, National Trust
Romano-British villa in a lovely valley setting. Two bath complexes and intricate mosaics, with a museum of local artefacts.

Fishbourne Palace
Salthill Road, Fishbourne, Chichester, West Sussex, off the A27
!st century Roman palace with intact mosaics, underfloor heating system and baths. Part of the gardens have been restored to the Roman plan, with appropriate plantings. Try your hand at making your own mosaic in a hands-on display area.

Lullingstone
Eynsford, Kent, off the A225, English Heritage
Discovered in 1949, remains of an extensive villa with lovely mosaic floors depicting ancient myths. Also on the site, the remains of one of the earliest Christian chapels in England.