HERITAGE HIGHLIGHTS:   Some of the finest Roman mosaics in England 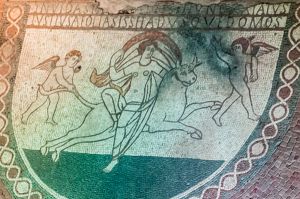 Lullingstone Roman Villa
In 1939, on the eve of World War II, an exciting discovery was made in the low-lying fields beside the River Darent, just south of Eynsford, Kent. Remains of an extensive Roman villa were found, but it was not until after the war that a proper archaeological excavation revealed just how important the discovery really was.
For as investigators dug away the earth of centuries they uncovered the remains of a large villa with lovely mosaic floors depicting ancient myths. The mosaic at Lullingstone is among the finest ever found in England and is virtually complete and unaltered by time.

The Cult House and Chapel
Perhaps even more exciting than the mosaic was the discovery that one of the villa's chambers contained one of the earliest Christian chapels in the country, dating to the 4th century and situated above an earlier cult-house and a hypocaust. This chapel chamber was decorated with a chi-rho monogram, one of the earliest Christian symbols, and a set of wall paintings that were interpreted as showing Christians at prayer. The cult house has a niche in one wall with a painting of three water nymphs, so it seems quite likely the chamber was associated with a water cult. 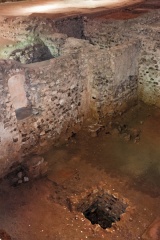 The cult house
Other chambers uncovered include sleeping quarters, kitchens, a porch or veranda, and a very extensive system of baths, with different pools for hot, warm, and cold baths.

But it is the mosaics that will draw most visitors; these decorate a large audience chamber and apse in the centre of the villa. The central figure depicted in the mosaic is Bellerophon riding the winged horse Pegasus and fighting the Chimera. The central figures are surrounded by four dolphins and two seashells, and these figures in turn are surrounded by foliage and geometric patterns. In the apse are further mosaics showing 'The Rape of Europa'. In this scene Europa is abducted by the god Jupiter, disguised as a bull. The pair are flanked by winged figures, one of whom grasps the bull's tail.

The villa was begun around 75AD, at a time when the Romans had finally brought most of the unruly British tribes - at least those in the south and east - under their control, producing a period of relative peace and prosperity. The was rebuilt several times over the ensuing centuries until it was finally destroyed around 420AD, shortly after the last Roman legions left Britain for good. 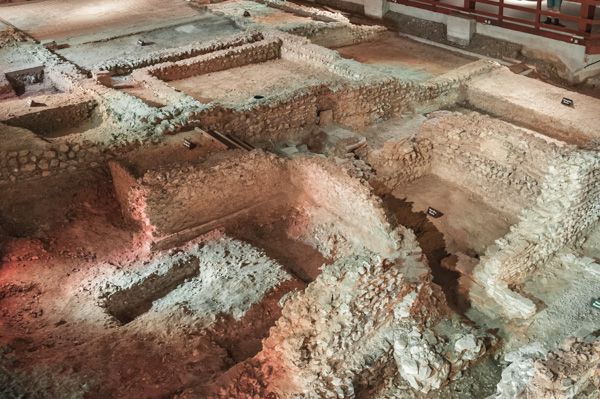 The bath complex
The entire villa is contained in a large, modern visitor centre, with walkways at ground level and above, giving a bird-eye view of the whole site. There are exhibits of finds from the excavations at Lullingstone, and further displays on life in Roman Britain. Most of the displays seem aimed at a young audience; indeed, I'd say that English Heritage really emphasises the educational aspect of the remains over all others. But there are certainly interesting exhibits, including a pair of busts known, not surprisingly, as The Lullingstone Busts. One of these large sculptures is thought to represent a former owner of the villa. It also looks very similar to known busts of Pertinax, a governor of Britain who went on to become Emperor of Rome. Based on this circumstantial evidence, it is possible that Pertinax used the villa here as a country house, or retreat, during his tenure as governor. 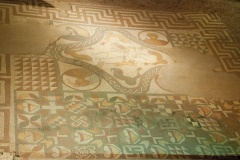 Bellerophon riding Pegasus mosaic
Outside the visitor centre, on a raised bank of earth, is a small circular foundation wall in the turf showing the outline of a small 2nd century shrine. The shrine was excavated in the 1950s then recovered with earth to preserve the remains. Nearby, though not so readily visible, is the site of a mausoleum. After the departure of the Romans a Saxon chapel was erected over the site, but again, very little of this can be seen. Behind the villa/visitor centre is the site of a rectangular 2nd century kitchen, later used as a tannery. while in the field across from the car park was a large granary. Again, almost nothing of this building can be seen today.

Summing up Lullingstone
I found the villa fascinating, especially the cult house and chapel, and the mosaics were quite stunning. It was a little strange, to say the least, to have the entire villa under a huge roof, with coloured lights illuminating the excavated chambers like a son et lumiere show. I'd have to say that distracted a bit from getting a real feel for the site, but the exhibits were certainly interesting, including one rather poignant child burial display. I highly recommend combining a visit to the villa with the nearby historic house of Lullingstone Castle and the ruins of Eynsford Castle in the village. 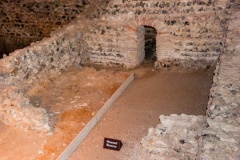 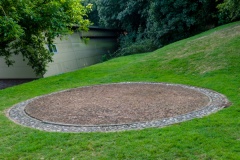 Site of the 2nd century shrine 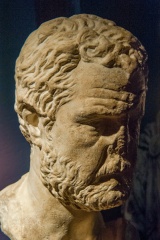 One of the 'Lullingston Busts'