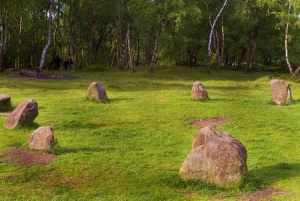 Nine Ladies Stone Circle (grid reference SK 249635 ) is one of several prehistoric stone circles and dozens of cairns and mounds that make Stanton Moor in Derbyshire's Peak District an archaeologically important area recognised as an SSSI (Site of Special Scientific Interest). In less environmentally aware times almost fifty years ago, and before the Peak District National Park was created, the Government granted 'mineral permissions' to allow quarrying at various sites around Stanton Moor.

The quarries at Endcliffe and Lees Cross have not been worked for nearly fifty years and have completely re-generated and blended back in with the surrounding area. Stancliffe Stone would like to extract 2.4 million tonnes of stone, creating 1.2 million tonnes (at least) of spoil over the next forty years.

If this scheme goes ahead it will not only degrade a part of the world's second most popular National Park (the most popular is in Japan) including a Grade II Listed building (the Earl Grey Tower, a monument erected to commemorate the passing of the 1832 Reform Act) and the Nine Ladies, but it will disrupt the water supply to the nearest village, which is supplied from a spring near the quarry site. There will be continuous heavy lorry traffic through areas not designed to withstand the vibration this will cause, with a consequent risk of building deterioration - in other words, houses falling down.

Permission for quarrying has been granted by the Peak National Park, but they have given Stancliffe Stone Ltd. unworkable guidelines in the way they quarry. Stancliffe Stone plan an appeal against these guidelines. The situation with old mineral permissions is rather complicated, but it appears local councils have to compensate companies if permission is overturned. This is not in keeping with the 'polluter pays' philosophy of the present government.

The Peak District National Park Authority acted recently to stop work when the company began making a path and chopping down trees in the area without the necessary planning permission. Bob Adams, vice-chair of the Planning Committee said, “This is one of a number of controversial proposals to re-open quarries around Stanton Moor which we are currently considering. Permissions granted in the 1950s may give the owners certain rights but the Environment Act of 1995 recognises that these have to be weighed up against the damage that can be caused, especially in National Parks. We are determined to do everything we can to ensure the National Park is protected.”

The proposed quarry is only 200m from Nine Ladies and 30m from the North Circle, another of the five original stone circles, of which four remain. Also nearby is a Bronze Age burial site (45 mounds, mostly excavated), five badger setts, bat habitats and a herd of wild Norwegian Fallow Deer. It will be a deep quarry (100m below current levels) and a local geologist thinks it would make the landscape susceptible to landslips.)

Tent-dwelling protestors have moved in to campaign over the threat right next door to Stanton Moor. Sparky, one of the Nine Ladies 'eco-warriors' described how they are camping in the shelter of the old quarry, about 1/2 mile from the top of the hill and well away from the Nine Ladies. "We are keeping an eye on the Nine Ladies site and regularly pick up the litter from around there. About 30 people take it in turns to stay in about 15 tents and tree-houses. Anyone is very welcome to come and visit". Contact them on 01523 164256 (text pager). The 'eco-warriors' are being supported with food parcels from the local residents' group known as SLAG (Stanton Lees Action Group).

The Nine Ladies is a well-known and much visited site. English Heritage has recently announced a scheme for an emergency excavation of parts of the site due to the damage being caused by thousands of boots and dozens of camp-fires. Each year around 40,000 people visit the circa 4000-year-old Stone Circle which is causing a rapid increase in erosion of this fragile site. Recent soil erosion has revealed evidence of a tenth stone and today approximately 20cm is exposed. Damage has also been caused by visitors digging holes for campfires and even chipping off pieces of stone as souvenirs.

Jon Humble, English Heritage's Inspector of Ancient Monuments for the East Midlands said: "Nine Ladies Stone Circle is a site of beauty and tranquillity for visitors, from near and far, and to many who believe the Stone Circle is of special spiritual significance. It is this popularity that has significantly accelerated the processes of decay. We must act quickly if we are to protect this mysterious and ancient site for future generations.

"Rather like investigative surgery, we will examine a small sample of the site to establish the extent and condition of the archaeological remains. Great care will be taken to ensure that intervention is kept to the minimum necessary to get the information we need. Less than 10% of the site will be opened up and the soil removed will be less than the amount lost in the last 20 years alone as a result of erosion."

"The findings from the study will contribute to the preparation of a Conservation Plan for the Stone Circle balancing its archaeological, ecological, landscape and aesthetic needs with the needs of its visitors today and in future generations. As part of a public information campaign a guide will be based at Nine Ladies during the study to explain the work to visitors." The archaeological evaluation will take place in May and last for four-five weeks.

Camp-fires are sadly common at the Nine Ladies, in fact the centre of the circle is marked with a large black patch. Fires are especially damaging near ancient stone sites, as the heat can make stone brittle and crack or disintegrate and black soot damages the patina of the surface.

To protest against the quarrying write to:

Rt. Hon. John Prescott, Secretary of State for the Environment, Department of the Environment, Transport and the Regions, Eland House, Bressenden Place, London SW1E 5DU. Request that the Endcliffe and Lees Cross application be "called in" and stress that this is a national issue affecting a National Park.

While you're writing you could mention that the same problem is occurring on the border of Dartmoor national park (Crownhill, Headon and Smallhanger Downs).

Planning permissions granted nearly half a century ago allow two multinational companies to build a 'super-quarry', which will obliterate a wild stretch of the Blackabrook Valley, near to Trowlesworthy, a name that may be more familiar to megalith enthusiasts. The quarries will also drown Shaugh Moor and Crownhill Down in slag heaps.

Amongst the known archaeological monuments affected by the scheme is a stone circle, three stone rows, several cairn cemeteries, many prehistoric roundhouses, enclosures and field systems; and medieval fields and sites related to tin working and quarrying, ironically. As you might imagine this list includes Scheduled Ancient Monuments and Listed Buildings.

Archaeologist Helen Wickstead, who brought this plan to my attention commented: "It is unlikely that planning permission would be granted today to destroy such a large area of archaeologically rich landscape." As long ago as 1975 Mortimer Wheeler and Jacquetta Hawkes wrote to the Times saying "We are of the united opinion that the loss of these antiquities would constitute little less than a national disaster"

The Dartmoor Preservation Association is campaigning to save these sites. Chief Executive John Bainbridge said, "We are challenging these two companies to scrap these outdated ancient permissions and to put in new applications."

Contact Andy with details of any ancient sites under threat at aburnham@easynet.co.uk