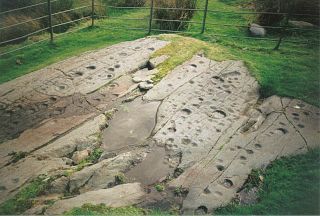 Kilmichael Glassary Cup and Ring Marks
Bronze Age cup and ring carvings decorate a natural rock outcrop near the school in Kilmichael Glassary village.
There are over 150 carvings on several exposed rock faces and nearby boulders, probably carved about 3000 BC. One rock with a well-preserved set of carvings has been fenced off. This is a sloping rock, but what is really striking is how deep the cup marks are compared to other rock art in the area.

Also, some of the circles around the central cup marks are elongated, rather like a keyhole, which is quite strikingly different from the usual concentric arrangement of rings you find elsewhere. Some of the rings are unfinished, and in a few cases the rings enclose more than one cup mark, which is again unusual.

Kilmichael Glassary isn't the most atmospheric site in Kilmartin Glen, being located beside modern houses, and suffering a bit from the encroachment of modern civilisation, but the rock art is striking and well worth the short detour off the A819. This is just one of the incredible array of ancient sites in Kilmartin Glen; just to the south are Achnabreck and Cairnbaan, with similar carved stones.

Nearby accommodation is calculated 'as the crow flies' from Kilmichael Glassary Cup and Ring Marks. 'Nearest' may involve a long drive up and down glens or, if you are near the coast, may include a ferry ride! Please check the property map to make sure the location is right for you.

More self catering near Kilmichael Glassary Cup and Ring Marks >>