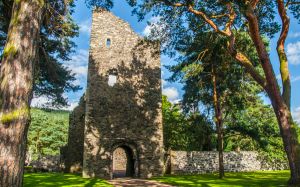 Cross Kirk began in unusual circumstances. In 1261 a cross was found on a site just outside the town centre of Peebles. Near the cross was a gravestone inscribed 'the place of St Nicholas the Bishop' (the 4th-century bishop of Myrna, in Turkey, and the model for Santa Claus).
Bones were also found and assumed widely to be those of St Nicholas. No one seems to have asked what the bones of a saint from Turkey were doing 9 centuries later, buried in the Scottish Borders!

These discoveries took place in the presence of King Alexander III - which seems rather convenient. Miracles were reported at the site, and Alexander ordered a priory to be built for Trinitarian Friars sometime before 1296. The Priory was dedicated to St Nicholas and to the Holy Rood, or Cross, and it is this association that gives Cross Kirk its name.

In 1474 the priory was raised to the status of a full monastery. The monastic buildings were extended, with domestic ranges and a cloister to the north of the church. The west tower, which is the most striking feature of the church today, was probably added at the same time.

The church was sacked by the English in 1549. It was repaired, but the social changes wrought by the Scottish Reformation were not to be kept at bay, and the last friars left in 1561. After the friars departed, Cross Kirk was used as the parish church for Peebles. It was finally abandoned in 1784 when a new church was built. The stone was used for other building projects, and the site was described as a ruin by the late 19th century.

The oldest part of the remains is the 13th-century nave. The north wall stands to its full height, but the west end is little more than foundation stones. At the west end is a memorial to the Hay family of Haystoun. The tower is roughly 50 feet high, built in 5 storeys. The chancel and sacristy have been reduced to foundation level, and though the cloister outline can be seen, the other monastic buildings are almost completely gone.

Nearby are the ruins of St Andrew's Church, founded in 1195, which was the parish church before it was burned by the English. Cross Kirk stands in a beautifully wooded area of parkland and is only a short walk from the town centre. 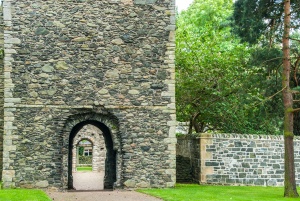 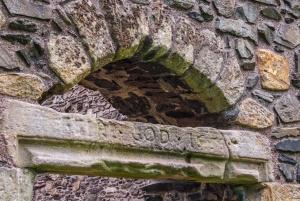 Inscription over a church doorway 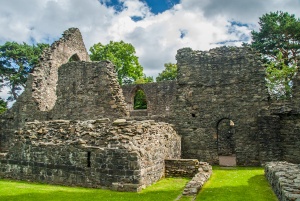 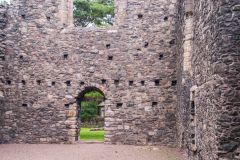 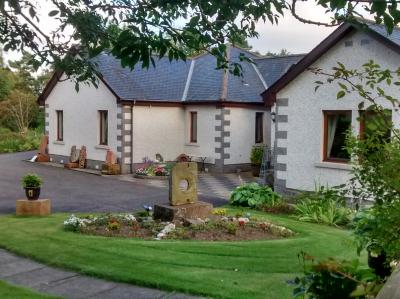 This spacious detached cottage rests in Lyne Station near Peebles, Scotland and can sleep twelve people in six bedrooms.
Sleeps 12 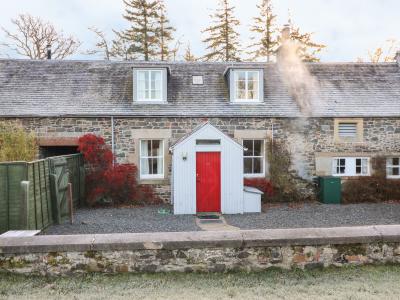 This stone cottage is located in Peebles, Scottish Borders and can sleep six people in three bedrooms.
Sleeps 6