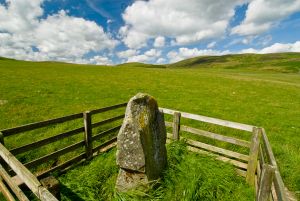 An early Christian stone approximately 4.5 feet in height. The Yarrow Stone was found during ploughing work during the early 19th century and has now been set upright, enclosed by a wooden fence. When found, it was lying flat, with the remains of human bones beneath it.

Was it a grave marker? It seems likely, though we don't know for sure. There is a very faint Latin inscription on the east face, but exactly what the inscription says is open to some debate. It appears to mark the graves of two 6th century British chiefs, sons of a chief called Liberalis. The grave marker was probably part of a family or tribal burial ground, and stood beside an old trackway.

The very worn Latin inscription has been translated as 'This is an everlasting memorial. In this place lie the most famous princes Nudus and Dumnogenus. In this tomb lie the two sons of Liberalis.' So a literal interpretation of the inscription is to assume there was a local chief named Liberalis, and the stone marks the burial place of his sons. There is another, more romantic interpretation, however.

The Yarrow Stone hit the news in 2012 when an amateur historian named Damian Bullen claimed that it marked the grave of the legendary King Arthur. Not content with the scholarly interpretation of the inscription, Mr Bullen broke down the words and concluded that the name Dumnogenus suggested descent from the Dumnonii, an ancient native British tribe whose territory took in much of what is now Devon, Cornwall, Somerset, and Dorset. His translation then takes on a different meaning; '‘Here lie two famous and very noble princes of Dumnonia, buried without possessions'.

He concludes that the stones mark the burial place of Arthur and his kinsman Mordred. His theory also takes in the nearby mere known as 'Dead Lake', which according to local folklore was the burial place of warriors who died in a local battle. Could the 'Dead Lake' be the place where Arthur cast his sword Excaliber before his death?

Of course, a certain suspension of belief is needed to accept this - or any other theory - when documentary evidence is scanty, but it is fun to speculate!

Another theory suggests that the Yarrow Stone marks an earlier battle of Arthur's recorded as 'in the wood of Celidon' by the 9th-century Welsh monk Nennius. Celidon may refer to the Caledonian Forest, what is now called Ettrick Forest, which encompasses the Yarrow site. One variation on the theory combines Arthur and traditional historical interpretation and suggests that the stone marks the graves of two local princes of Strathclyde who died in Arthur's battle here.

While I can't vouch for this being the grave of King Arthur, I can vouch for the wonderfully scenic setting! The open countryside is glorious, with wide views over the surrounding hills and along the glen.

There are several other prehistoric sites in the area, including the quite sizeable standing stone known as the Glebe Stone, just a short distance down the road.

More self catering near Yarrow Stone >>